DETROIT (FOX 2) - The speed limit is 30 miles an hour on Schoenherr, but those who live there say it is more of a suggestion.

Speeding drivers have hit cars parked in driveways, houses, light poles, and sometimes neighbors say, the drivers get out and remove their license plates, and take off running.

The speed limit is 30 miles an hour on Schoenherr, but those who live there say it is more of a suggestion.

"I heard a big boom, and I looked out my door and the car was upside down with a baby in it," said another neighbor, Sharon.

Residents living along Schoenherr between Seven and Eight mile roads have been pleading with Detroit for years to do something about the speeding and reckless driving in their neighborhood.

"I’ve sent numerous emails to the city asking for traffic lights, speed bumps, even speed signs, they could even put that up," Howard said. "But to no avail."

A two-car crash at Schoenherr and Lappin Wednesday afternoon- in which a driver and 4-month-old baby were taken to the hospital is the latest in a long line of examples of how dangerous this roadway can be.

"They left the baby in the car, another young lady grabbed the baby and they ran off," said Chenelle Wright. "They left cell phones, keys, everything. And this is, all the time."

"A car crash from Pinewood and Schoenherr ended up on my front porch," said Latonya Reynolds. "And tore down my porch."

"You can see the brickwork is different at that brick ranch, the car was actually in the house," said Dr. Gregory Tukes.

Tukes, of True Church Ministries on Schoenherr, showed FOX 2 where a speeding driver nearly plowed into the church building on Christmas day.

"They ran into the gate here, took all of this gate out which is a couple of thousand dollars worth of damage," he said. "And they ended up on this boulder here and if it wasn’t for that boulder, they would’ve gone right into the sanctuary."

The city’s traffic engineering division shot down residents’ request for additional traffic signals on Schoenherr back in April. There have been at least four crashes within a quarter-mile stretch of the street since then.

"My realtor came to my house three days ago, he was almost hit in front of my house getting out the car," Tracy Oden.

FOX 2: "You said your realtor? Are you getting out of here?"

FOX 2 spotted a city contractor prepping for the installation of speed humps on a pair of side streets as they approach Schoenherr. The city says they’ll be installed no later than Monday and is confident they’ll reduce speeding.

For residents there, that’s a start, but by no means is it the fix. 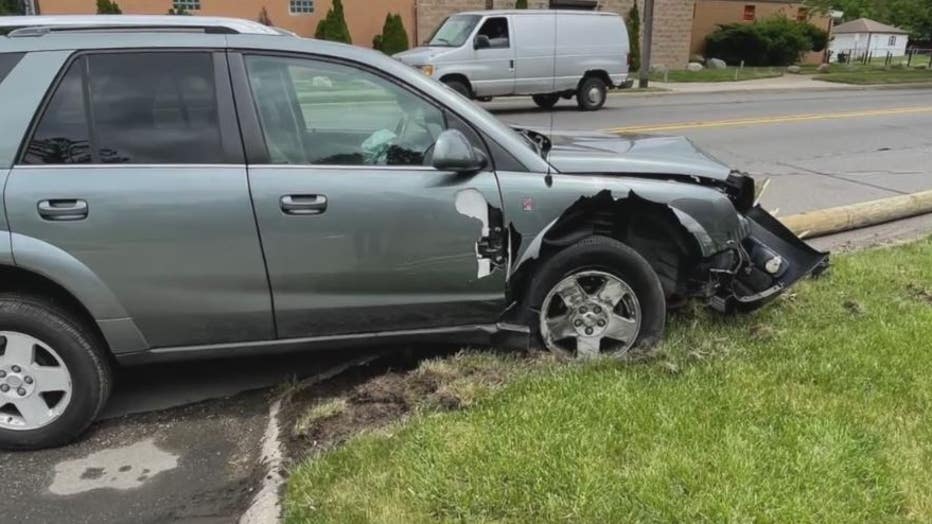 A photo of a recent crash on Schoenherr.

"What is it going to take for someone to die? A fatality to happen before someone takes this seriously?" Reynolds said.

Police say the 23-year-old driver and the 4-month old are in stable condition from Wednesday's crash.

In a statement, a spokesperson for the city of Detroit said: "We are aware of the traffic signal requests we've received for Schoenherr and Pinewood, as well as Schoenherr and Lappin.

"Unfortunately, these requests could not be justified due to the close proximity of existing signals at both Seven Mile and State Fair.

"The safety of our residents is our top priority. We will continue to closely monitor this area to ensure traffic protocols are being followed."