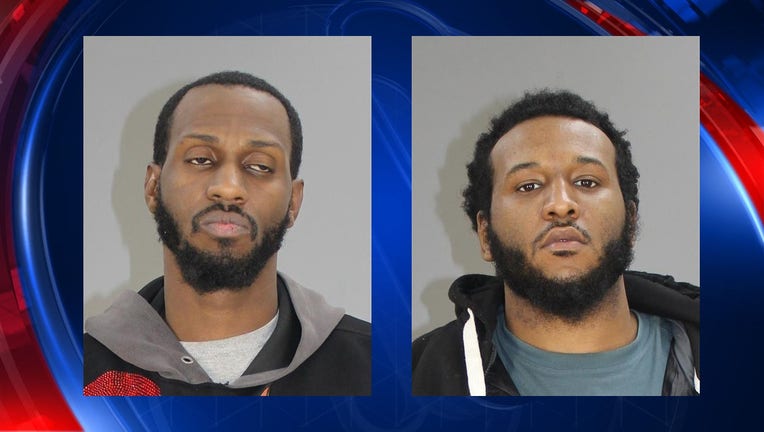 ROSEVILLE, Mich. (FOX 2) - The Roseville chief of police tackled a suspect accused of breaking into a 7-Eleven with a stolen SUV before a chase Monday morning.

Police were called to the 7-Eleven at 18716 Masonic around 5:35 a.m. after a vehicle was used to pull the front doors off of the building.

An officer spotted the suspect vehicle at Gratiot and Masonic, but the driver fled and a chase ensued. When the driver tried to jump the median on Gratiot, the vehicle flipped and three people fled on foot, police said.

Police said that vehicle was stolen.

An officer arrested 25-year-old Deshawn Watkins, of Detroit, after a short foot pursuit.

Another suspect, 33-year-old Bryan Gray, also of Detroit, was arrested about ½ mile from the crash scene by Chief of Police Ryan Monroe, who had heard about the chase while driving to work.

Monroe saw Gray near I-94 and chased him on foot. When Gray tried to hop over a wall, Monroe tackled him and restrained him as he tried to resist arrest, police said.

The police department said Monroe is a 25-year veteran of the force, and credited the tackle to his football career at Wayne State University and Lutheran North High School.

Gray is charged with breaking and entering a building with intent; receiving and concealing stolen property -- motor vehicle; and assaulting/resisting/obstructing a police officer. He was given a $25,000.00 cash/surety bond.

Watkins was charged with breaking and entering a building with intent; and assaulting/resisting/obstructing a police officer. His bond was set at $15,000.00 cash/surety.

The third suspect fled and has not been located.