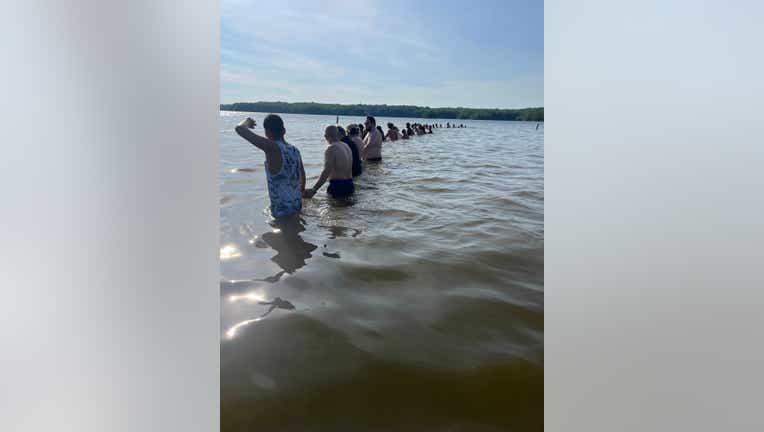 Beach goers form a chain to look for a missing girl

OAKLAND COUNTY, MIch. (FOX 2) - "The whole beach came together." That's how one searcher described it as they frantically scoured the waters of Kensington Metropark for a missing 6-year-old girl on Memorial Day. Unfortunately, despite their best efforts and ingenuity to search, the little girl was later found unresponsive in the water and died at a nearby hospital.

The girl, who has not yet been named, went missing a little before 5:30 p.m. on Monday. That's when police were called to Martindale Beach in Kensington Metropark.

According to Dominick Rambo, who was at the beach for the steamy Memorial Day, there were multiple different missing kids announced and they were all later found, except the 6-year-old girl.

"On the speaker they kept announcing how one kid after another went missing and everyone had been found except a 6-year-old girl. They were walking in walls through the water," said Rambo. "The whole beach came together. We all came together as one looking for her."

When police couldn't find the girl on the beach, they started checking the water.

Eventually, beach goers linked hands and spread out as far as they could into the water to search for the Detroit girl.

She was later found in the water, taken to the hospital where she later died.

The girl's mother, Tricia Bland, told FOX 2 she can't believe it was real.

Bland said her daughter, Zaniya, and her other kids wanted to go swimming so they picked Kensington.

"I kept my eye on them as close as possible and turned my back for a quick second a few minutes later that’s when the young lady we came to the park with said she couldn’t find her," Bland said.

After a massive search, her little girl was found but later died. Bland said her daughter didn't know how to swim on her own.

"My daughter knew not to go in the deep end she didn’t do that on her own," she said.

Bland would not speculate if someone led her into the deep water intentionally.

Bland set up a GoFundMe to help pay for Zaniya's funeral. Click here for more information.

Dominque Springer was at the beach as well and said they spent roughly and hour trying to find the girl.

"They were telling us the kid was missing for about an hour. We all locked arms in the water searching for this kid. Me, I’m about to be a father and I used to be a lifeguard, and we searched and found her," Springer said.

A Detroit mom said she turned her back for just a few moments on the lake. In that short time, her 6-year-old daughter, who she said knew not to swim in deep water, went farther into the lake. Now she wonders if she wasn't encouraged to head into the deep.