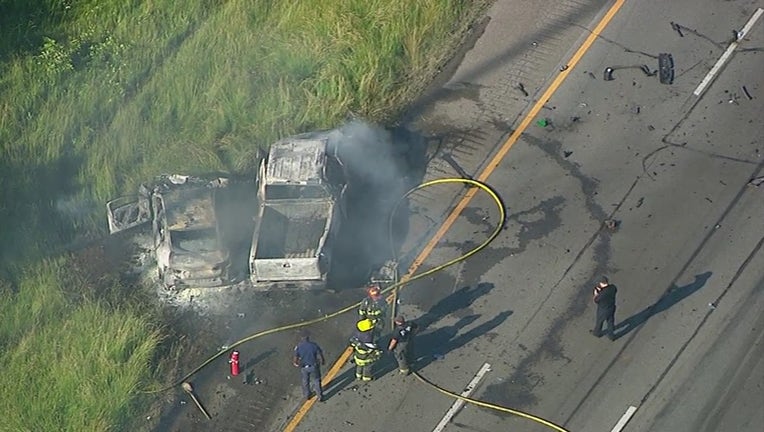 Crash at I-94 and Telegraph.

TAYLOR, Mich. (FOX 2) - Two people died in a traffic crash on I-94 in Taylor Tuesday morning when the drivers of two vehicles involved in the collision suffered severe burns.

State police investigating the scene said a sedan struck a pickup truck, causing it to crash into a semi-truck in the center lane of westbound I-94, in the area of Beech Daly. The crash shutdown westbound traffic from Telegraph.

The crash happened around 8 a.m.

According to police, the driver of a sedan came "from an unknown location" and struck the pickup truck. The impact sent the pickup into the semi before both it and the sedan came to a rest on the left shoulder.

A fire engulfed the vehicles.

The semi truck came to a rest on the left shoulder, blocking traffic access in the process.

Both were taken to the hospital before being pronounced dead.

Police are continuing their investigation. The driver of the semi-truck was not injured.

According to the Michigan Department of Transportation, all lanes are now open to traffic.