DETROIT (FOX 2) - Michigan State Police focused on speeders along I-96 Tuesday but got more than troopers bargained for. There were so many people speeding that there were not enough troopers or cruisers to go after them.

Police crackdown on I-96 speeding results in 133 tickets Tuesday

Michigan State Police and Detroit police set up shop on I-96 near Joy Road in Detroit a day after publicizing the sting, and their plan to target lead-foot drivers.

"Sometimes I kind of wonder what the answer is because we announced it yesterday on Twitter, it was on every news outlet including yours, I think the traffic helicopter was overhead for a while, and it didn’t stop a thing," said 1st Lt. Mike Shaw.

Shaw says the success of the state police traffic detail Tuesday says more about drivers hit with big tickets, than the troopers who wrote them.

They set up shop on I-96 near Joy Road in Detroit a day after publicizing the sting, and their plan to target leadfoot drivers.

When it was all said and done, troopers along with the Detroit Police Department made 142 traffic stops and issued 133 speeding tickets.

"The speed limit on that area of the freeway is 70 miles an hour, we did not even try to get anybody under 85," Shaw said. "The top speed today was 115. We ended out about 4 o'clock this afternoon with a 100 (mile per hour ticket)."

State police cracked down on the stretch of I-96 after receiving several complaints about speeding drivers there. And they say it’s also been a hot spot for some shootings.

Couple that with the rise in reckless driving and the rash of freeway and road rage shootings across southeast Michigan and state police say these sorts of efforts are a no-brainer.

"We’ve seen seatbelt usage go down, we’ve seen freeway shooting go up," Shaw said. "So no, there’s not anywhere better that we could’ve been doing out there. And we plan to continue doing just that very thing.

"I think you just saw someone blow that red light right behind us and had no idea. If someone else had been coming, or a pedestrian or something, they would’ve been dead."

State police received some pushback on social media for Tuesday’s enforcement effort. One man argued that poorly designed infrastructure is partly to blame for poor driving. 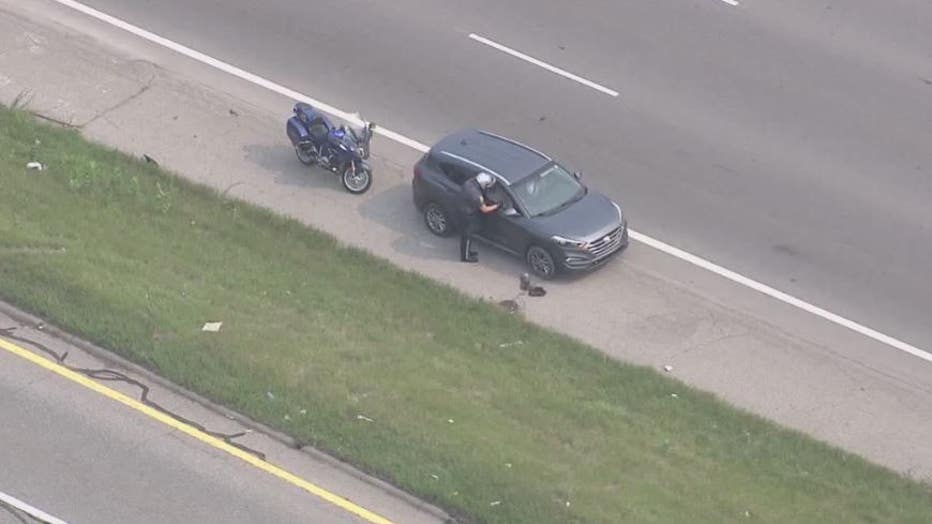 Maurice "Pastor Mo" Hardwick of the Live in Peace Movement is hesitant to call the enforcement detail a success.

"I think DPD and MSP for being present and having a mission to protect the freeways, and make sure we are dealing with the right people and structures so that we get the outcome we are looking for," he said. "That is not a bunch of tickets and traffic infractions and people in financial ruin. Let's make sure we help them become better drivers."

"We know that people are dying in traffic crashes from excessive speeding and not wearing their seatbelts," Shaw said. "But I can’t get in the car with them and buckle them up and work the break, so sometimes tickets are the answer."