DETROIT (FOX 2) - State representative Karen Whitsett from metro Detroit tells FOX 2's Charlie Langton that she spoke with President Trump Thursday night and that he said Kwame Kilpatrick would be one of 3,000 prisoners soon released.

Rep. Whitsett says the early release is related to the COVID-19 pandemic and that the former mayor will be on house arrest, but that his risk factor was also taken into consideration for the release.

An earlier report posted by FOX 2 incorrectly stated that Kwame Kilpatrick was granted clemency. This was incorrect and we have corrected the mistake. We regret the error.

Rep. Karen Whitsett says President Trump has told her that former Detroit mayor Kwame Kilpatrick will be one of 3,000 prisoners soon released during the pandemic.

Rep. Whitsett's name was also one of several on a letter hand-delivered in February to President Trump asking for an early release for Kilpatrick back in February. The letter was delivered by Rep. Sherry Gay-Dagnogo during an invitation to the National African American History Month Celebration at the White House. Gay-Dagnogo said the letter is signed by several Detroit caucus members, elected officials and ecumenical leaders.

"I had had a previous conversation with [President Trump] regarding state representative Sherry Gay-Dagnogo, who brought the letter to the president and that we had all signed, me and my colleagues, to have the former mayor released and I am very excited that he listened," Rep. Whitsett told FOX 2 Friday. "The president actually told me, verbatim, that yes, [Kwame Kilpatrick] is going to be part of the 3,000 that were going to be released."

Current Detroit Mayor Mike Duggan was asked during his Friday press briefing on the city's COVID-19 response for his thoughts on the situation. He said people who know him know his connection to Kilpatrick is "very personal."

"Known him since he was in high school. When he was teaching at Marcus Garvey and going to law school at night at DCL, he'd study in his father's office which was next to mine and his twins would play on the floor in my office," Duggan said.

Duggan said Kilpatrick is one of the most talented people he's ever met.

"He has a lot to contribute and if, in fact, the reports [of his early release] are true, I'll be doing anything I can to help him get a fresh start," the mayor said.

Rep. Whitsett, who's from District 9 which serves parts of Detroit and Dearborn, has been outspoken throughout the COVID-19 pandemic against her own party, garnering attention for calling out the Democrats and Gov. Gretchen Whitmer.

Whitsett tested positive for the coronavirus in March and has credited hydroxychloroquine with saving her life, the controversial drug that President Trump has said he himself is currently taking to help prevent COVID-19.

A few weeks after her recovery Whitsett called out Gov. Gretchen Whitmer, claiming she hasn't done enough during the pandemic and that everyone should "get behind" the president and unite together during the pandemic. She was eventually then censured by a group called the 13th Congressional District Democratic Party Organization, meaning the group will not be supporting her return to the state legislature. 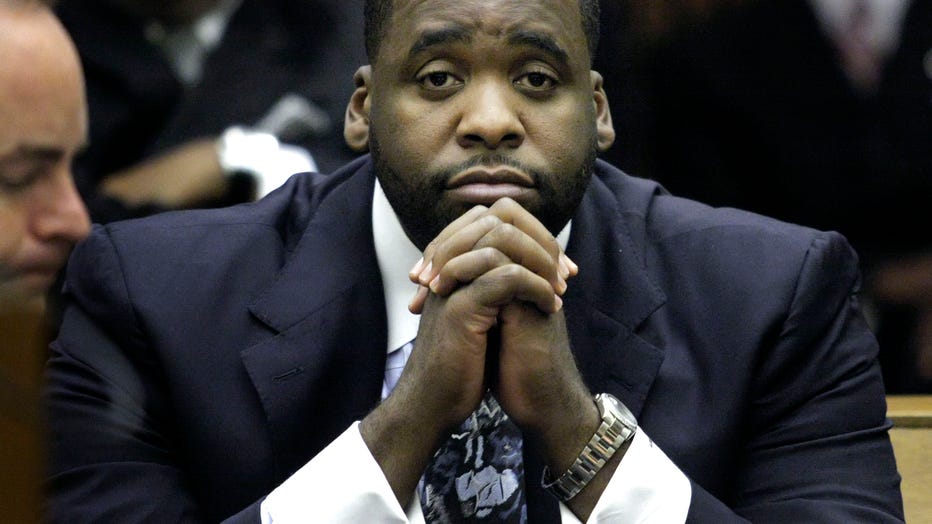 DETROIT - OCTOBER 28: Former Detroit Mayor Kwame Kilpatrick appears in Wayne County Circuit Court for his sentencing October 28, 2008 in Detroit, Michigan. Kilpatrick will spend 4 months in jail as part of a plea deal he accepted back in September in

In a release published by the Ebony Foundation on Friday, the foundation announced in March it had grouped together with several other Black leaders in calling for Kilpatrick's release.

According to the Bureau of Prisons, Kilpatrick is still being held in a low-security federal prison in Louisiana and does not comment on an individual inmate's conditions of confinement or release plans, citing privacy, safety, and security concerns

FOX 2 has not confirmed the report from the White House but we are working the story throughout the day.

“Kilpatrick was sentenced to 28 years in federal prison for his crimes. And while there has been a lot of debate about his guilt or innocence, we were arguing neither, rather, we were opposing the excessive nature and length of his sentence. Kwame Kilpatrick’s punishment of a 28-year sentence did not fit the crime.” says Rev. Keyon S. Payton, National Director, Community Outreach and Engagement said in a statement, The EBONY Foundation adding, "as EBONY celebrates its 75th year we take pride in continuing to use our platform to raise awareness to issues of social justice and civil rights."

Kilpatrick, who was convicted of perjury, obstruction of justice, and other crimes, was not expected to be paroled until 2037.

While the group did not downplay the severity of crimes that Kilpatrick was convicted of, Rev. Keyon S. Payton, national director of community outreach and engagement at the organization argued his almost three-decade-long sentence "did not fit the crime."

The organization ramped up efforts recently to help Kilpatrick get out of prison, making multiple pleas to President Donald Trump to grant the former mayor clemency. The president has pardoned several convicted felons during his time in office.

In a letter sent February 25 requesting an early release. It's one of several efforts pushed by the group to get Kilpatrick out of jail. In Friday's release, it mentioned coordination between several groups including the National Baptist Convention of America, the NAACP, National Business League, and "a coalition of over 30 Black Megachurches."

Kilpatrick has attempted several avenues for getting out of incarceration, including making requests of President Donald Trump for clemency. In a blog post published on the Free Kwame Project website in 2018, Kilpatrick wrote  "I am ready (mentally, emotionally, spiritually) to go home!" in an update titled "Ready for the second-half ... it's time."

There's also been a growing voice from other Detroit officials who have advocated for his release. Detroit Rep. Sherry Gay-Dagnogo said she planned to personally deliver a letter asking for clemency to Trump in February after she was invited to the National African American History Month Celebration at the White House.

"No one is arguing the former mayor's guilt or innocence," Gay-Dagnogo said in a press release. But rather she hopes this will open up a conversation about "the disproportionate sentencing that men of color experience at every level of the system."

“This is welcomed news for my friend and his family. I’m certain that Kwame will take advantage of this opportunity to make a positive contribution to society and fulfill his immense potential to do good and make a difference," said Pastor Jamal Bryant, a member of the new Birth Missionary Baptist Church  "We prayed and God answered.”

Kilpatrick was given a 28-year prison sentence for crimes committed while mayor of Detroit. He was first elected to the position in 2001, before resigning in 2008 following a text message sex scandal involving his chief of staff.