FARMINGTON, Mich. (FOX 2) - Wednesday’s storm made a mess of Metro Detroit and the Farmington area was one of the hardest hit. Downed trees blocked roads, and downed wires to freeways.

"I was sitting here watching the Tigers, it was almost the end of the game, and I looked out the window and (whew) it came down - right on the house, right on the porch here," said Jim Ryder.

Wednesday’s storm made a mess of Metro Detroit and the Farmington area was one of the hardest hit. Downed trees blocked roads, and downed wires on freeways.

And there was plenty of that to go around. Authorities say straight-line winds reached speeds of up to 70 miles an hour, uprooting trees, shearing branches, and damaging homes.

Virginia Capaldi’s was one of them.

"The wind just came up so quickly, and by the time I walked into the house, the back tree had already fallen," Capaldi said. "And I checked the side and opened the blinds, and this tree had come down."

"They were sparking, it was a mess," said Tracy Gee.

Gee watched as live wires danced across the entrance to her apartment, near I-275.

"The rain was going sideways, it was hailing and the power line tipped over and fell on the freeway, the whole way," Gee said.

And that shutdown I-275 near Grand River for hours. The downed and low-hanging wires even trapped a pair of SUVs.

"As long as you remain in the vehicle when you are in a situation like this, you are safe," said Chief Jon Unruh, Farmington Hills Fire Department. "It is when you try to exit a vehicle there would be some challenges and some danger."

Residents, contractors, and city workers are now on clean-up duty.

Generators were also hard at work as more than 100,000 DTE Energy customers are without power.

Many lost power before a drop of rain ever fell, including at Peterlin's restaurant which went dark as they were serving customers. 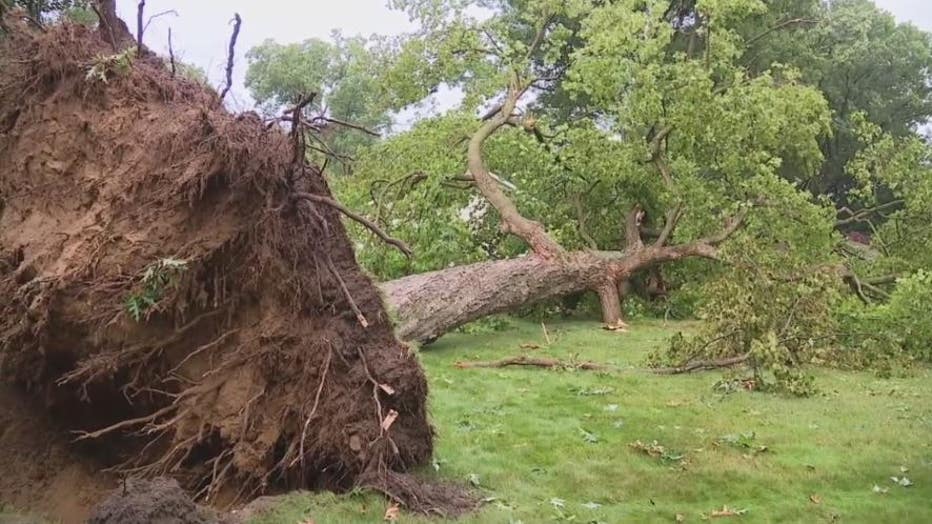 "Just out of nowhere, it wasn't raining or anything, the skies had looked a little crappy prior, but nothing to warrant that coming all of a sudden," said Anne Skinner.

"We have a lot of trees on homes and on vehicles, a lot of substantial damage," said Chief Jon Unruh, Farmington Hills Fire Department. "But thankfully no injuries reported that we are aware of."

Chief Unruh warns everyone to avoid downed power lines because although some might not be live, there is no telling when they have been re-activated as electricity is restored.