SUV gets stuck in reverse on 8 Mile in Detroit

Jimmy Ellerbee said he was nearly hit by a woman as she pulled into a store on 8 Mile in Detroit and mistakenly put her Chevy Suburban in reverse instead of park. Then the car started doing donuts in the middle of 8 Mile, with nobody at the wheel. Video credit: Jimmy Ellerbee.

DETROIT (FOX 2) - An unlikely scene unfolded on 8 Mile in Detroit near Southfield Monday afternoon when a Chevrolet Suburban got stuck in reverse, with its wheels turned to the left, causing it to turn donuts Monday afternoon.

Jimmy Ellerbee uploaded his video to Facebook around noon on Monday that showed the beige Suburban stuck in reverse on 8 Mile.

The video starts with a woman running alongside the car's driverside door, holding on to the handle. She's waving at passing traffic for help and another woman appears to jump in the middle of the circle before jumping back out, narrowly avoiding getting hit by the SUV.

The Suburban hops onto the median multiple times and crosses all three lanes of 8 Mile as the woman tries to get the door open. A man then got into the middle of the SUV's donuts and threw something at the driver's side window, breaking it.

The first woman then is able to reach into and open up the car door and glass falls on the road. But she still couldn't get inside.

Then the man who smashed the window is able to jump inside the SUV and finally bring it to a stop.

According to Ellerbee, the woman pulled up to a store and he believes she thought she put in park before getting out. He said it was stuck in reverse and nearly hit his truck. 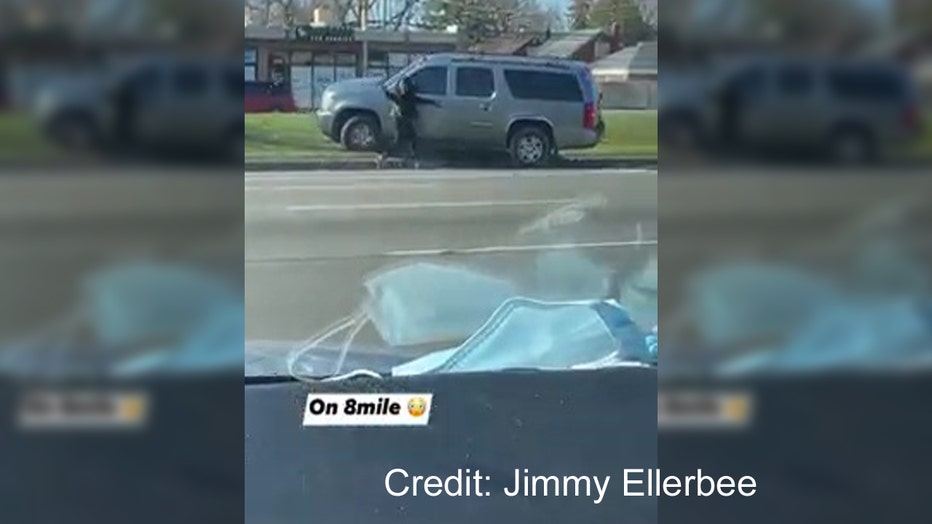 A Chevrolet Suburban got stuck in reverse on 8 Mile in Detroit Monday afternoon, resulting in the SUV doing donuts in the middle of the road without a driver in the seat.