(FOX 2) - UAW workers continue to walk the picket line on what is now week five of the strike against GM. Over the weekend, thousands more workers joined the line nationwide.

Over the weekend, the UAW said workers on strike at GM and Aramark will now get $25 more in strike pay. They're up to $275 bucks a week, and they can get a side job without losing their UAW pay as long as they also show up on the picket line.

Over the weekend, the UAW said workers on strike at GM and Aramark will now get $25 more in strike pay. They're up to $275 bucks a week, and they can get a side job without losing their UAW pay as long as they also show up on the picket line.

"I wouldn't have to beg and plead with different creditors to say okay, who am I going to pay this time?" she said. "If you're here on the strike line doing your duty, that shouldn't affect any side work that you have coming in."

In a test of wills, GM and UAW have been battling it out over the bargaining table on the key issues we've know about since the start, like healthcare, temporary workers, and investment in the U.S. vs. Mexico. While some headlines say some issues are settled, Local 22 union rep John Hatline, like his brethren, feels it is pure speculation.

"Anything that could be settled now could change next week as they go back and forth," he said.

We know the UAW reported unsettled issues had been kicked up to the main table, but the strike endures.

"Hopefully it changes for our union brothers and sisters out here today that have been walking the line for 29 days now," he said.

According to the Center for Automotive Research, the auto industry has been an important part of the nation's economy. Historically it's contributed between 3-3.5 percent of our total GDP and employs 1.7 million people across America.

"For the overall business of the country, everybody's gotta be taking a cut or some type of loss at some point," said striking GM worker Maurice Faust.

The impact of one of the longest strikes in modern history beating down the door to a month could be profound for the economy. 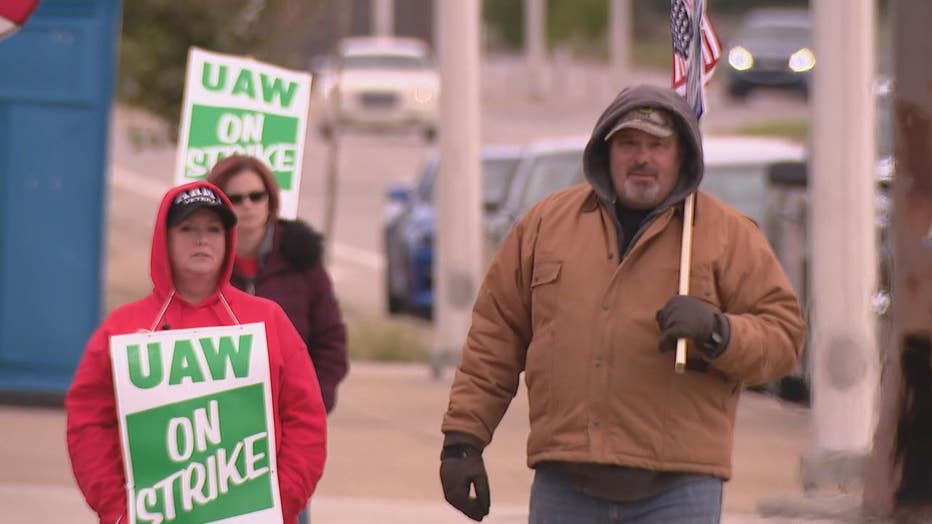 "It's a big industry. The job multiplier is huge. It's by far the most powerful industry in terms of being a force multiplier. It exports a lot; it has a lot of money that it spends on research and development," said Dr. Marick Masters of the WSU School of Business.

About 3,600 hourly workers at Mack trucks plants in three states went on strike just before midnight Saturday, adding to the number of UAW workers now on strike nationwide.