What to know about ticks, Lyme disease

Michigan is expected to have a bad tick season. Here's what you need to know to protect yourself.

DETROIT (FOX 2) - Ticks are expected to be bad this year in Michigan.

These small creatures can transmit Lyme disease to humans and pets.

How is Lyme disease spread?

Blacklegged ticks, also known as deer ticks, can spread Lyme disease in their nymph and adult stages. Adults are found in the spring and fall, while nymphs are active in the summer.

Usually, a tick needs to be attached to a person or animal for about 36-48 hours for the bacterium, Borrelia burgdorfer, to spread.

According to the Michigan Department of Health and Human Services, these ticks are found in both the Upper and Lower Peninsula in wooded and grassy areas.

Read: Mosquitoes and ticks expected to thrive this spring, summer

These ticks are usually about 1/8 of an inch long, have black legs, and a round black shield behind its head. 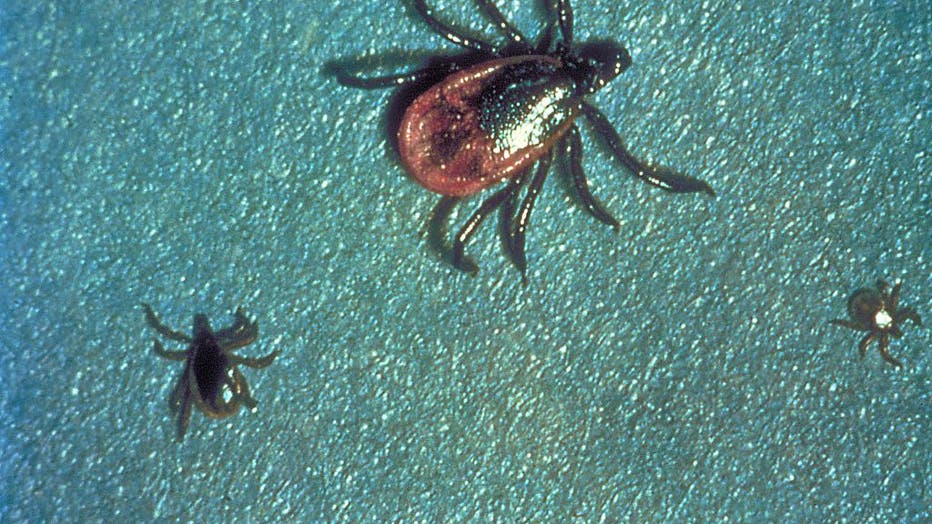 These "black-legged ticks", Ixodes scapularis, also referred to as I. dammini, are found on a wide rage of hosts including mammals, birds and reptiles. Black-legged ticks, I. scapularis are known to transmit Lyme disease, Borrelia burgdorferi, to hum

What are the symptoms of Lyme disease?

The symptoms of Lyme disease typically show up 3-30 days after the bite, though the average is seven days.

Early symptoms in humans include a rash, fever and chills, headaches, and muscle or joint pain.

The rash, known as Erythema migrants, appears in about 70-80% of Lyme disease cases. The rash may be warm but usually does not itch or hurt, according to the CDC. It can expand with time, sometimes reaching up to 12 inches or more across.

This rash often looks like a bulls-eye but can also appear differently. According to MDHSS, the rash could also be solid red, multiple red oval-shaped spots, or a reddish-blue mark with an expanding and clearing ring.

If you think you have Lyme disease, go see a doctor because it is easier to treat early.

Untreated Lyme disease can present more symptoms as time passes. This includes severe headaches and neck pain or stiffness, facial drooping, rashes on other parts of the body, arthritis (especially in the knees), heart palpitations, muscle pain, dizziness, shortness of breath, nerve pain, tingling or numbness in hands or feet, and brain or spinal cord inflammation.

According to Cornell University, Lyme disease in dogs can cause lameness, swollen lymph nodes, joint swelling, fatigue, and loss of appetite. However, not all dogs show symptoms.

Dogs can also experience serious kidney problems if they have the disease.

How is Lyme disease treated?

Lyme disease is treated with antibiotics.

Symptoms of IV-treated Lyme disease may last for some time beyond treatment.

If you are outside, especially in a wooded area, you have a chance of getting bitten by ticks. Lessen that chance by wearing bug spray with DEET and treating your clothes or gear with 0.5% permethrin.

Also, wear long clothes. Some research has suggested that dark-colored clothing attracts fewer ticks. However, ticks are easier to spot on light-colored clothes.

When you get inside, check yourself for ticks, and take a shower.

Places to check for ticks:

Be sure your dog is on flea and tick medication. Also, be sure you check your pet before they come inside to make sure they are not carrying any ticks.

The one and only, Mike Palmer, from Premier Pet Supply joined us to talk about what we can do to help prevent ticks and fleas from jumping on our furry friends as we head into the spring and summer months.