U of M football player hires lawyer after MSU assault

University of Michigan football player Gemon Green has hired an attorney after he was assaulted by Michigan State University players in the tunnel of the Big House after Saturday's game. The incident was captured on video.

ANN ARBOR, Mich. (FOX 2) - Update (6 p.m.) A total of eight Michigan State players have been suspended for their role in the alleged assault of University of Michigan players following Saturday's game.

Four additional players have been suspended as of Tuesday afternoon: Malcolm Jones, Justin White, Jacoby Windmon, and Brandon Wright - in addition to the original group of Tank Brown, Khary Crump, Angelo Grose, and Zion Young while police are investigating.  Michigan State announced that the suspensions will remain active until the investigation concludes.

Gemon Green, the University of Michigan football player seen being attacked by Michigan State University players after Saturday's game, has hired a lawyer.

"Not only does Gemon Green deserve to be compensated for his injuries, severe consequences in this case will deter others who might think they can get away with brutally beating an opposing player and getting a slap on the wrist. I’ve got news for the MSU players who did this to Gemon. They are going to feel the full extent of the law."

A total of eight players have been suspended now by MSU as the investigation continues following Saturday's tunnel assault.

Attorney Todd Perkins, who is not involved in the case, weighed in on the possibility of charges.

"It looks like these are misdemeanor offenses — assault and battery. Now, if someone used their helmet. If someone used a… could a cleat be considered a dangerous weapon? Could someone exasperate the charges and make them into a felonious assault — meaning assault with a deadly weapon — I don’t see that," he said. "You have to look at the equities. What I mean by equities is there’s a law. There’s a law that says you’re not supposed to do this. It’s assault and battery, most likely. But in looking at the equities — what is the right thing to do. What is the most appropriate thing to do without offending justice; without offending the general public." 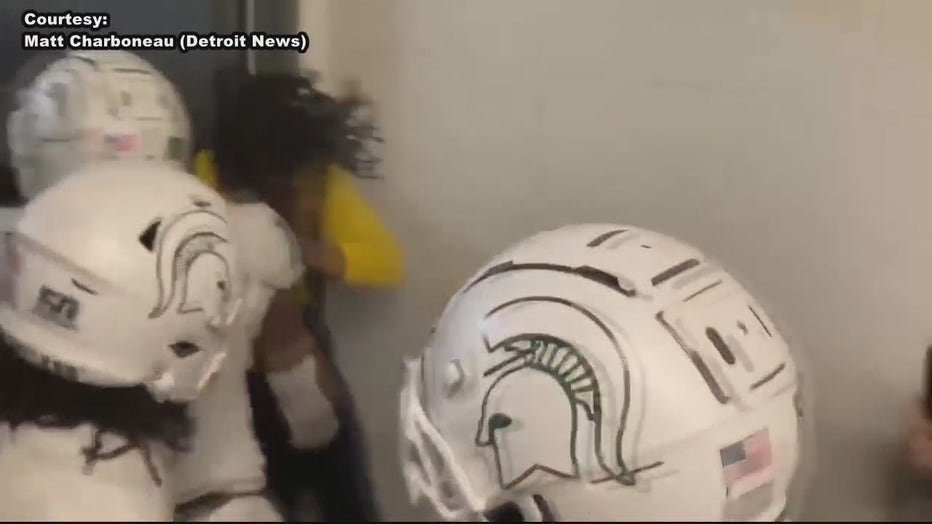 Perkins said if charges are filed, police must take reports and statements to present to the Washtenaw County District Attorney.

Other videos could play a major role in what, if any, charges are filed. One of those videos from the field shows a Michigan player walking into the tunnel with MSU players moments before the fight.

Since one U of M player has an attorney, we asked Perkins about a potential civil suit.