FOX 2 - Steven Delahaye claims to have seen Inkster Democrat State Rep. Jewell Jones driving erratically on I-96 before he eventually got into an accident in Livingston County.

Michigan State Police troopers arrested the Democratic representative from Inkster Tuesday evening. He was booked at the county jail and released Wednesday afternoon.

"He kind of kept veering around through traffic and he ended up on the left side shoulder," he said. "It's just good that he didn’t get seriously injured, you know?"

"We lost him for probably three to five miles, and then still on 96 west, we saw him on the right side again, going probably 50 to 55, and that’s when he went back over," said Delahaye said. "And I got the video and started recording him, he almost hit the bridge right before the Latson exit.

"And that is when we ended up getting off and he kept going."

Steven Delahaye recorded a video of a Chevrolet Tahoe driving on the shoulder of I-96 Tuesday evening. 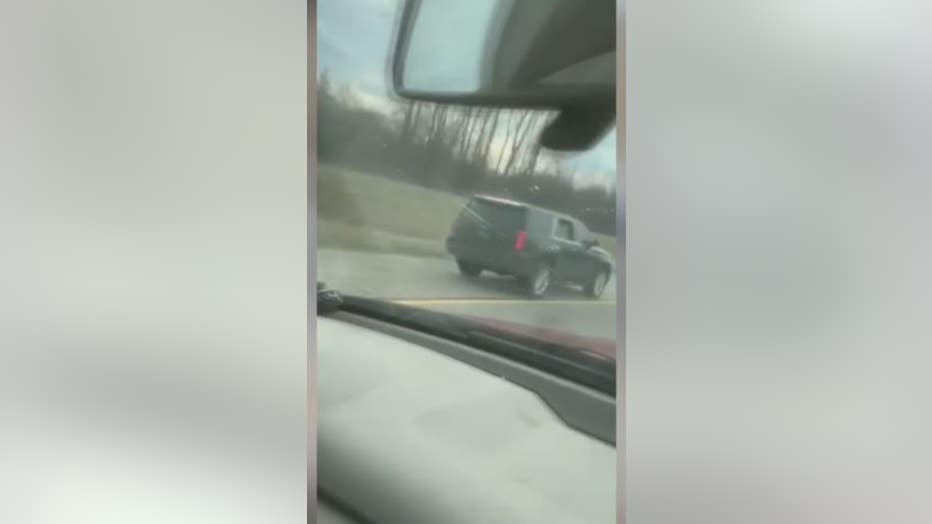 Video still allegedly shows State Rep. Jewell Jones driving on the shoulder of the freeway before his arrest.

The vehicle’s description and plate matching that of the SUV registered to Jones.

"It was a black Chevy Tahoe, an SUV, kind of tinted windows on it," he said.

"I saw what he looked like, and he looked younger and whatnot," Delahaye said. "He was African-American and so when I got the link, right away I could tell by his hair and everything, I was like, whoa that’s totally him."

Jones was initially set to be arraigned Wednesday afternoon, but that is now on hold as state police and the Livingston County prosecuting attorney await lab test results.

Both Democrat and Republican leaders weighed in on the situation.

GOP Speaker of the House Jason Wentworth said, "What I've heard so far is incredibly disappointing. Elected officials and community leaders have the people's trust and must be held to a higher standard."

House Democratic Leader Donna Lasinski said:  "We are currently gathering information and details regarding this incident. given this is an active investigation, we will not be offering further comment until we get additional facts."

"We don’t know what happened, however, we do know that he was arrested and that is a concern," said Inkster Police Chief William Riley.

State troopers informed Riley of Jones’ arrest. Jones is an auxiliary officer, a volunteer position, for the Inkster Police Department.

"As a result of that information, we have launched an investigation, an internal investigation regarding that arrest to see what occurred," Riley said.

Chief Riley says jones has been suspended pending both the internal and the state police investigations. Michigan State Police says it will take a few weeks to get lab test results back.

In 2018, Jones was stopped by police and cited for excessively tinted windows and an open intoxicant in his car, but the latter charge was eventually dismissed.