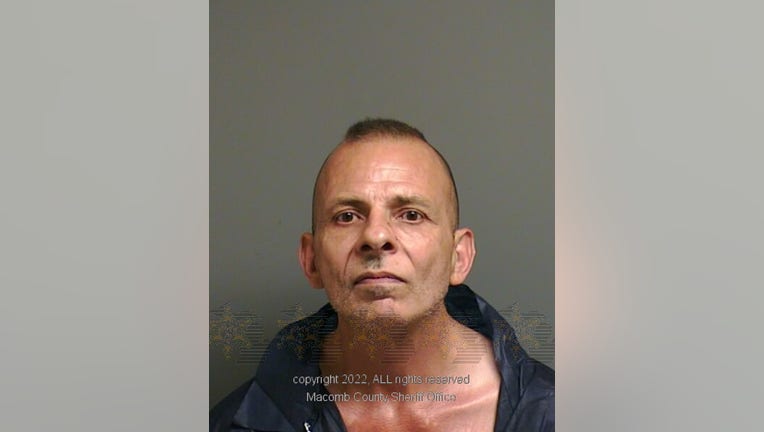 WARREN, Mich. (FOX 2) - A Warren man accused of using a racial slur and firing a rifle he aimed at a man this week was arraigned on ethnic intimidation and gun-related charges Wednesday.

Warren police say Anthony Mangiapane stood across the street on Schoenherr and pointed a green laser at the victim's chest. Then, while standing in a doorway wielding the rifle, said "N***** you better get moving!" before firing three shots.

A witness who was on the phone with the victim at the time heard the gunshots, police said. It happened around 11:30 p.m. Monday at Eight Mile Road and Schoenherr.

The incident escalated after police responded to the residence and Mangiapane barricaded himself inside the business. He later surrendered.

While investigating the location, police also found a cache of weapons as well as an M203 grenade shell in a safe. It was sent to Lansing for analysis. They also found:

Police also found a rifle with a green scope that was used during the initial confrontation with the victim, identified as a 37-year-old Black man who lives in St. Clair Shores.

"No one should be intimidated or harassed because of their race," said Macomb County Prosecutor Pete Lucido.  "I am thankful for visiting Judge Michael Maceroni for setting an appropriate bond."

Mangiapane was charged with several felonies, including: