How one family's car registration mistake cost them their SUV

A family had their 2,000 red Mercury Mountaineer stolen from them right out of their driveway. A police report was filed with the city of Warren, but the vehicle was never found - at least until it was spotted by the family themselves. But the driver had purchased it legally, records show. Part of the confusion over the scene is because the family never registered it with the secretary of state

WARREN, Mich. (FOX 2) - A family in Warren has learned the hard way what happens when they never register their car with the Secretary of State.

Despite being legally purchased, their ownership of the vehicle was never made official with the state - which became a problem when it was robbed from them earlier this year.

The legal confusion started when the 2000 red Mercury Mountaineer that the Miller family purchased in 2021 was stolen from them. They had bought it off of Facebook Marketplace for $3,000 last year. The theft happened on Feb. 23 when the family saw it being driven out of their driveway.

"They hopped in the Mountaineer then they drove off - turned the headlights on and they were gone," said Casey Miller.

A neighbor's video helped the family create a police report for the stolen SUV. But Warren police never gave them a call about its recovery. Then, while the family was going to a firework show, they see their stolen mountaineer.

"She turns around, it has the same St Ann's sticker on the back - my son goes to school there. We turned around and made a U-turn and we got behind him," said Casey.

Warren police eventually pulled the vehicle over, but never made any arrests. Casey Miller says it's because the driver said the guy had purchased the car legally.

After a little digging, the Mountaineer was found in Redford a week after it was stolen - abandoned. But because the Miller family had never gone to the Secretary of State's office to get a legitimate title, the police didn't know they had purchased it.

READ NEXT: Wife of fallen Detroit police officer crestfallen; 'Me and my babies will never be the same'

Casey admits he doesn't know how they would have known either.

"A lot of people jump title, they never actually register the vehicle," said Makoyia Jenkins, the dispatch manager at North Redford Towing, where the stolen SUV was towed to. It sat on the lot for 55 days before being sold at auction for $975. 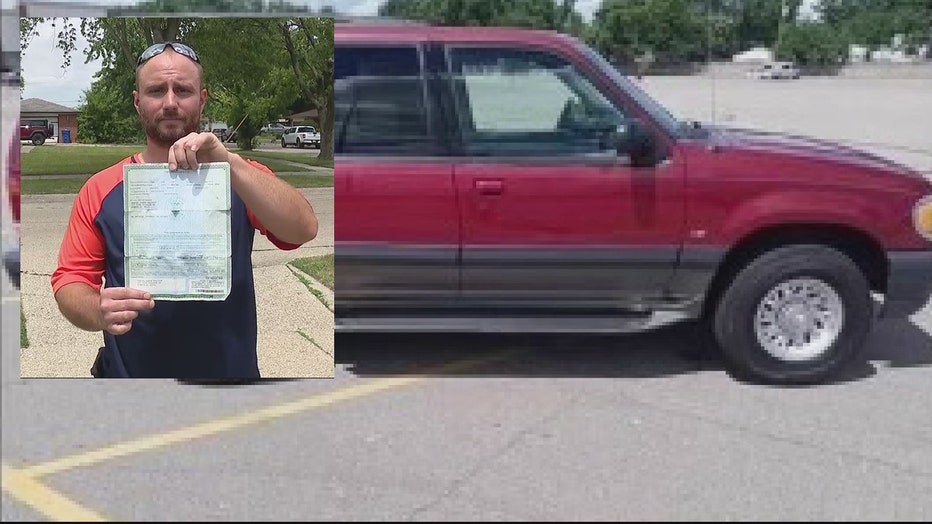 Casey Miller and the SUV that was stolen from them.

"The TR 52 is a document that's obtained through Redford from the state of Michigan. They (police) bring that to us. And then we verify that we have the car in our lot, in our inventory," said Jenkins.

Had the vehicle made it into the stolen vehicle lien system, the only name that would have come up would have be who it was most recently registered to at the Secretary of State - which wouldn't be the Millers in this case.