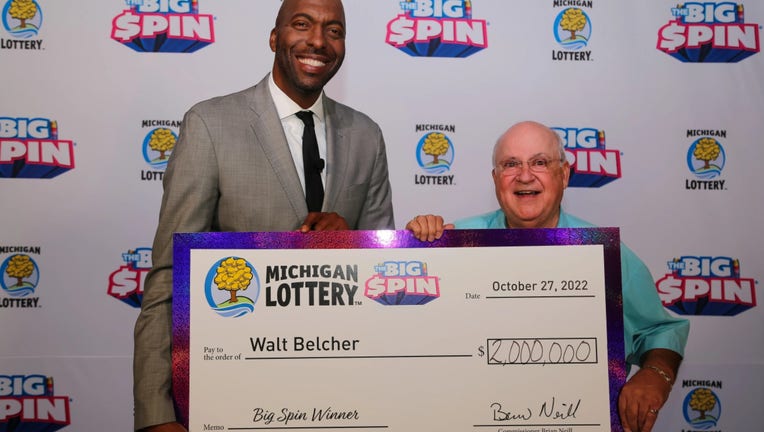 WATERFORD, Mich. (FOX 2) - A 71-year-old Oakland County man is still trying to come to grips with the incredible moment that his life changed as he won $2 million from the Michigan Lottery during The Big Spin show with John Salley.

Walt Belcher from Waterford was selected as a participant in the lottery's televised game show hosted by former Detroit Piston John Salley. He was one of five participants chosen at random from non-winning Big Spin tickets.

Belcher was given instructions by Salley, turned around and spun the wheel - which eventually landed on the $2 million prize.

"When the wheel stopped on the $2 million prize, I was blown away! All of this has been such a blessing and I feel very fortunate," Belcher told the lottery.

"I still can’t believe that I had the chance to be on The Big Spin show," Belcher told the lottery. "I entered lots of tickets, but I never thought I would actually be chosen.

Each player who is picked to spin the wheel is guaranteed to win at least $100,000.

Tickets for The Big Spin sell for $10 each and offer instant win prizes between $10 and $1 million. The game was launched in September and has already doled out more than $6 million in prizes with another $64 million remaining.

Belcher opted for the lump sum payment of $1.3 million over 30 annual payments.