MDOT hopes to reopen one lane of I-75 this week, full reopening in August

After Monday afternoon's terrible tanker truck crash on I-75 in Troy, the Michigan Department of Transportation is hoping to get enough cleanup and repairs done to allow at least one lane of traffic to reopen in each direction this week.

TROY, Mich. (FOX 2) - After Monday's massive fire involving a tanker truck on a new section of I-75 in Troy, the Michigan Department of Transportation said it expects to open at least one lane on the southbound side of the highway.

RELATED: I-75 closed in both directions after tanker truck crash

MDOT spokesperson Rob Morosi said that, tentatively, they hope to have the highway completely reopened by August 1 but that is dependent on weather and the progress of rebuilding the freeway damaged in the fire.

"We have about 600 feet of this wall to remove and rebuild. It got scorched to the point where you can start flaking it off," Morosi said. "The heat and intensity of the fire has rendered a lot of this pavement unsafe."

There was not a timetable given for the reopening of the ramps in either direction.

Video released by Troy Police shows the tanker truck crashed into the center concrete median around 1:15 p.m. on Monday, burning a massive fire fueled by thousands of gallons of gasoline on the highway which was recently finished after several years of construction.

The unnamed driver of the truck, a 46-year-old man from Saint Clair, Michigan, was in the center lane and just passing the exit for Big Beaver in Troy when he suddenly veered over into the left lane, just in front of a small SUV.

DETOUR: Both directions of I-75 closed after tanker fire, here's the detour

The tanker narrowly avoided the SUV but then collided with the concrete barrier separating the two directions of traffic. All traffic in the northbound lanes immediately came to a complete stop and that's where the dashcam video ends.

The fire burned for about two hours before it was finally extinguished by foam brought in by an Oakland County truck. 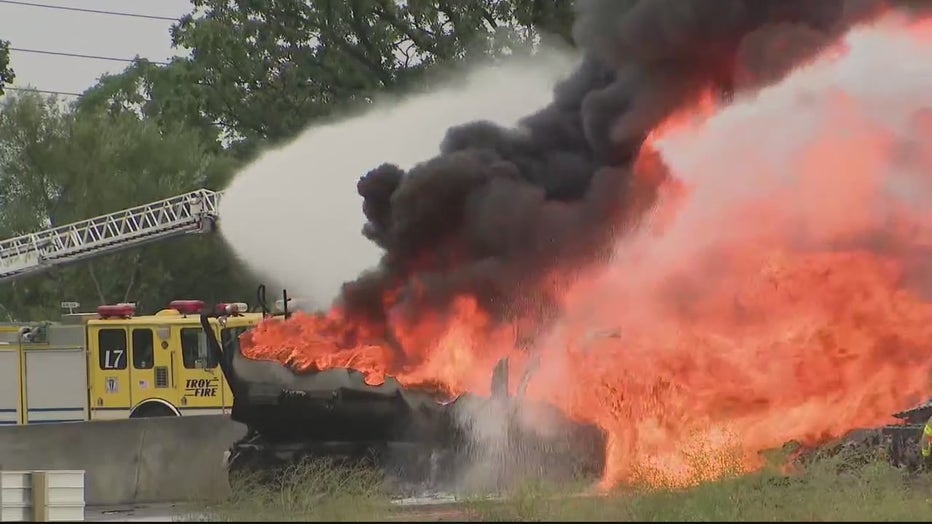