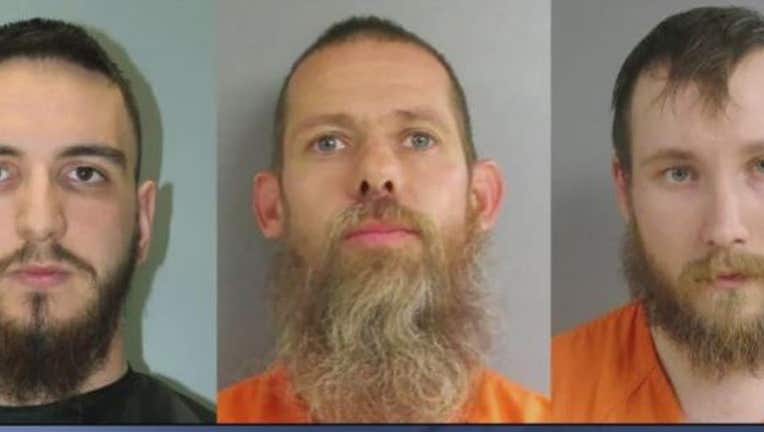 JACKSON COUNTY, Mich. (AP) - A scheme to kidnap Michigan’s governor in 2020 will get yet another airing in a different court when three men face trial Monday, just weeks before voters consider whether to reelect Gretchen Whitmer to a second term.

Fourteen men were arrested two years ago, disrupting what one participant said was a plan to incite a U.S. civil war known as the "boogaloo." But not all were treated the same. Federal prosecutors focused on six who were considered to be key players, while Michigan authorities handled the rest.

A look at the issues:

The government said it broke up a plot to kidnap Whitmer, a Democrat, from her vacation home in northern Michigan. For months, undercover FBI agents and informants were embedded among anti-government extremists who trained in Wisconsin and Michigan and made trips to scope out her property.

Investigators secretly recorded hate-filled conversations about Whitmer and other public officials who were denounced as tyrants, especially during the COVID-19 pandemic when businesses were shut down, people were ordered to stay home and schools were closed.

Ty Garbin and Kaleb Franks pleaded guilty in federal court in Grand Rapids, Michigan, and testified against four others. The alleged leaders, Barry Croft and Adam Fox, were convicted in August, while two more men were acquitted last spring.

Joe Morrison, father-in-law Pete Musico and Paul Bellar are charged in Jackson County, Michigan, with three crimes, including providing material support for terrorist acts, which carries a maximum prison sentence of 20 years. They’re accused of forming an alliance with Fox and others through their paramilitary group, the Wolverine Watchmen.

Jackson County is where gun drills and other training with Fox occurred.

"They didn’t go out and participate in a plan to kidnap the governor," Assistant Attorney General Sunita Doddamani said in court in 2021. "Their group provided the motive, means and opportunity for those individuals that did do so."

Mark Chutkow, a former federal prosecutor in Detroit, said dividing the cases between state and federal authorities made sense.

"The state attorney general has carved out a piece of the conspiracy where you have three people working in concert in Jackson County," Chutkow told The Associated Press. "That’s a story that’s digestible, that a jury can get its arms around, and a story more easily translated than scooping everyone up" in federal court.

What is the defense?

Lawyers for Morrison, Musico and Bellar say the men cut ties with Fox before the kidnapping plot accelerated in summer 2020; Bellar had moved to South Carolina.

They plan to sharply question an important witness, Dan Chappel, an Army veteran who said he joined the Wolverine Watchmen to maintain his gun skills but was distressed over talk about attacking police. He agreed to stay in the group and become an FBI informant.

The men claim they were entrapped by Chappel and his FBI handlers, though Garbin, another likely witness for prosecutors, will knock that down.

Any weapons drills simply were to prepare for "potential civil unrest in the United States," said Bellar’s lawyer, Andrew Kirkpatrick.

But a judge who found enough evidence to send the men to trial likened the Wolverine Watchmen to a minor league baseball team where players are trained to join the "big leagues."

The kidnapping plot hadn’t been mentioned much in Michigan’s gubernatorial race until Republican candidate Tudor Dixon seemed to make light of it during a Sept. 23 campaign appearance.

"The sad thing is, Gretchen will tie your hands, put a gun to your head and ask if you’re ready to talk," Dixon said, apparently a reference to Whitmer’s pandemic policies. "For someone so worried about being kidnapped, Gretchen Whitmer sure is good at taking business hostage and holding it for ransom."