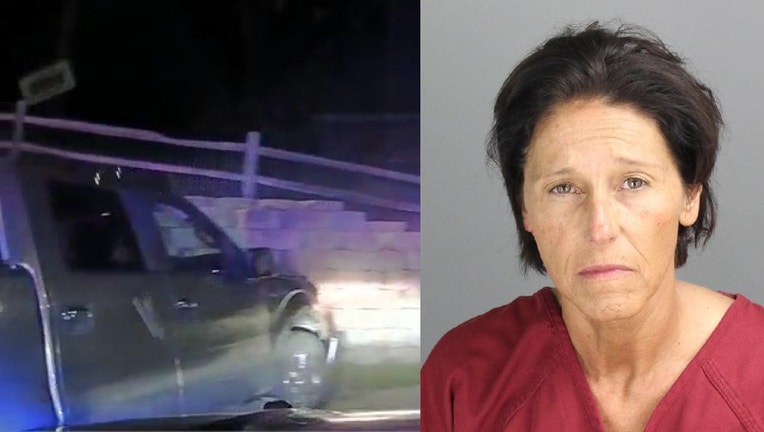 ROCHESTER HILLS, Mich. (FOX 2) - A woman is accused of trying to steal several vehicles from a Rochester Hills gas station before leading deputies on a chase in a truck stolen from Indiana on Sunday, police said.

Oakland County sheriff's deputies were called to a Mobil gas station in the 2900 block of Walton Boulevard at 11:51 p.m.

The caller told police that a woman, identified later as Colleen Margaret Staker, was driving his Dodge Dart away from the gas pumps when he walked out of the store. Staker stopped driving and got out of the car in the gas station parking lot. Authorities said she took two wristwatches, money, and a bag containing firearm magazines from the car.

After that, Staker is accused of getting into a Dodge Ram and attempting to start the pickup truck. The truck's owner confronter Staker, who then got into a Ford F1-50 pickup truck and fled the gas station.

A deputy saw a truck matching the description in a parking lot across the street from the gas station. Authorities said the deputy made contact with the woman driving, Staker, and she sped away.

A woman led police on a chase in a stolen pickup truck after trying to steal other vehicles from a Rochester Hills gas station.

The deputy activated their lights and sirens and began pursuing the vehicle, which was identified as stolen out of Indiana, officials said.

The deputy contacted Rochester police, who deployed stop sticks in the area of Walton Boulevard and University, east of Livernois. Staker hit the sticks, damaging her tires, but kept driving, officials said. She eventually hit a brick paver wall at East University and Elizabeth Street and was arrested, authorities said.

Staker, also known as Colleen Margaret Yantis, 50, of Trafalgar, Ind., was charged with two felony counts of unlawful driving away in an automobile and one count of fleeing and eluding. Her bond was set at $5,000 cash/10%.

Authorities said alcohol was not a factor and Staker has no prior criminal history.