A woman riding with her husband noticed an erratic driver behind them and then pulled her phone out - and recorded the driver smashing into another car. She said the driver was staring at her phone.

WARREN, Mich. (FOX 2) - Taking your eyes off the road for just a second puts your life and others at risk. That's why Michigan's distracted driving law is in place - to prevent accidents like what Maivue Yang witnessed.

She was riding in the front seat as her husband was driving down Van Dyke in Warren. They literally saw what was going to happen a mile away.

"I didn’t notice her until the light at 10 Mile and Van Dyke. But my husband noticed that she was almost hitting us and swerving behind us," Yang said.

As they continued heading south on Van Dyke, the SUV was swerving all over the road, Yang said.

She said it was clear by the time they got to the next red light what was causing the erratic driving.

"I turn back and look at her and her hand is like - she is on her phone with both hands like texting away," Yang said.

And it got worse, she said, and that's why her husband urged her to record the driver.

"At this point, my husband is like you know what, she's going to hit us. You have to pull out your phone and record her," Yang said.

At 9 Mile - one mile after they first saw the apparently distracted driver - the SUV clips the back of a car in the median waiting to make a left turn. The SUV then flips onto its side and causing another car to swerve onto the sidewalk and nearly hit a person in a wheelchair.

"When I spoke with the police I was like is everyone ok? Because that was a near-death experience seeing a car jump the curb like that," she said.

Yang says she gave the video to Warren Police as they investigate what happened.

She said she decided to share the video to serve as a warning for what can happen when drivers don't pay attention. 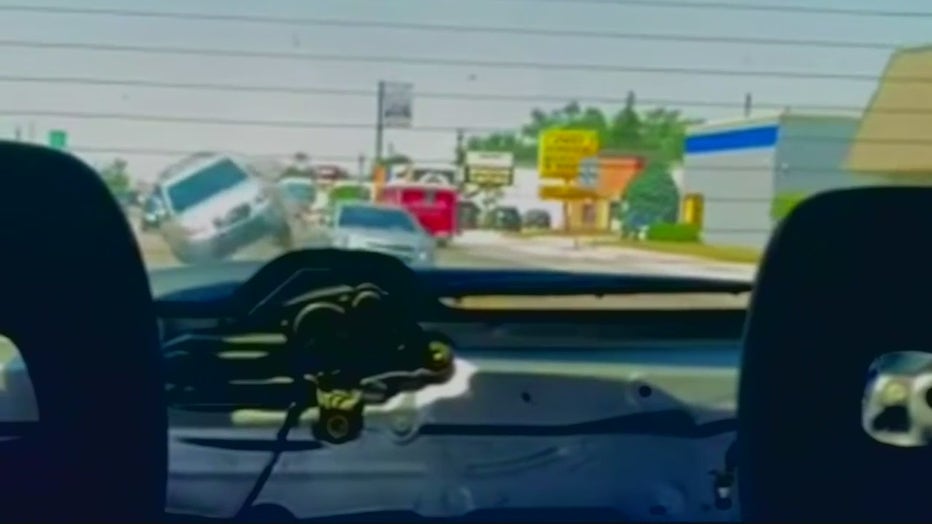 A passenger in a car in Warren noticed an erratic driver so she hit record on her cell phone - and captured video of the apparently distracted driver crashing into another car and flipping over.