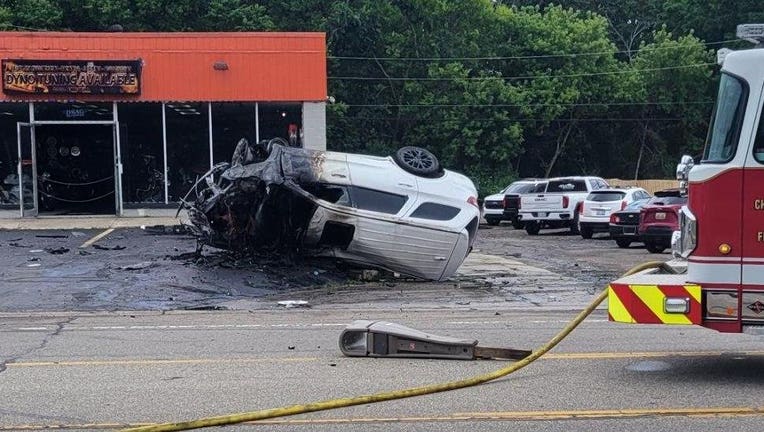 SUPERIOR TOWNSHIP, Mich. (FOX 2) - Two teenagers are in custody and a third suspect is missing after a vehicle theft turned into a high-speed chase in Washtenaw County Tuesday. The suspects eventually crashed while being pursued by police, injuring a bystander and wrecking the vehicle.

The suspects that were arrested, Ypsilanti-natives who are 17 and 15 years old, were taken to the hospital due to injuries from the crash.

The incident unfolded hours before police spotted the suspects when a homeowner in Superior Township got a call from her neighbor that her front door was wide open and her belongings were spread across her yard.

The homeowner told police her vehicle had also been taken from the residence, located in the 200 block of Wiltshire Drive. She called the Washtenaw County Sheriff's Department around 7:35 a.m.

The suspects were pursued into Wayne County, where troopers from Van Buren and Michigan State took over. The chase then led back to Washtenaw County where the suspect driver eventually lost control of the vehicle and crashed on Ford Boulevard near Russell. It struck another vehicle before flipping and catching fire.

An image of the crash posted by police showed the front half of the stolen vehicle completely destroyed by fire damage. The surrounding pavement was also damaged.

In a Facebook post, Washtenaw County said an innocent bystander suffered minor injuries in the crash. All three suspects fled on foot before two were picked up.

Anyone with information is asked to contact the Washtenaw County Sheriff’s Office confidential tip line at 734-973-7711 or through Crime Stoppers at 1-800-Speak-Up.