SOUTHFIELD, Mich. (FOX 2) - There was a lot happening when it comes to the history of America on July 4, 1776 - I can promise you that almost no one was too concerned with the weather. Well, maybe one person: Thomas Jefferson.

Thanks to Thomas Jefferson, we know the weather for the very first 4th of July

Derek Kevra takes a look back at the weather for the first 4th of July in 1776.

Mr. Jefferson, prior to his appointment as the very first Secretary of State, traveled to Philadelphia for the Second Continental Congress - the group that on July 4th signed the Declaration of Independence.  When arriving in the city, he purchased another thermometer to add to his collection (by the way, it wasn't cheap) and continued his habit of recording high and low temperatures as well as daily rainfall.

This holiday weekend, download the FOX 2 News app for important updates and information pushed to your device - when you need it the most. It's available for free on iOS devices and in the Android store.

On July 4th, 1776, Thomas recorded temperatures 4 times throughout the day (despite what we can only assume was a very busy and emotional day).

Another Philadelphia man by the name of Phineas Pemberton was also a weather nerd and kept his own records of historical weather. He too recorded a July 4th, 1776 high of 76 degrees with partly cloudy skies and a northern wind. How's that for some weather verification?

Climate Scientists agree that our "average" temperatures today are likely warmer than they were back in the mid-1770s - today's average high for Philadelphia on July 4th is nearly 87 degrees!

Even so, a 76 degree day was probably a welcome forecast, especially when you consider the heavy wool suits the Founding Fathers were wearing!

Here in Michigan? The holiday weekend will start cool on Friday - and then get very warm in time for the Fourth. 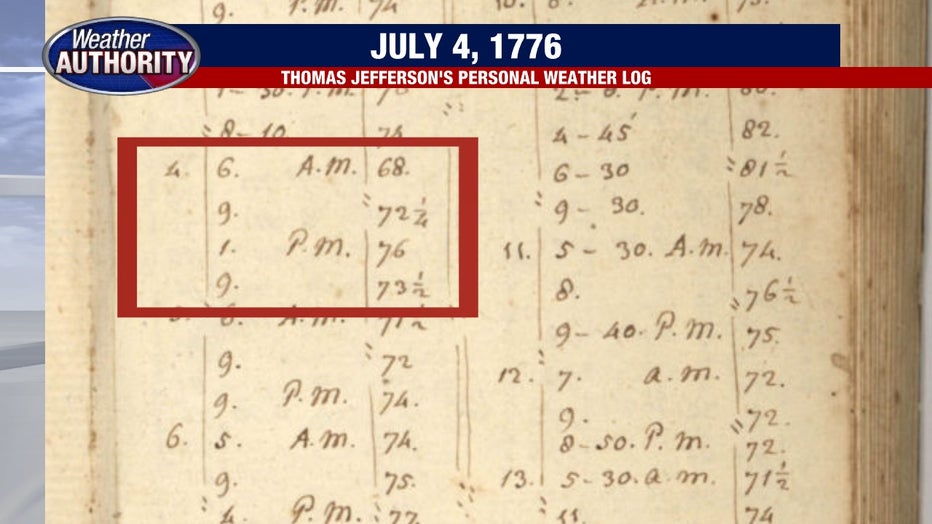