An 8-year-old girl who was shot in the arm during a shooting incident this weekend is expected to be okay after a gunman in a four-door burgundy Cadillac opened fire.

MONDAY NEWS HIT - Detroit police are looking for the suspect involved in the non-fatal shooting of a girl this weekend.

Sometime late Saturday night, a burgundy-colored Cadillac with four doors pulled up to a vehicle where an 8-year-old girl was with her mom and another child and someone inside began shooting.

The rear windshield was shattered and bullet holes could be seen in the exterior of the gray car.

"I got a little girl out here shot we need the public's help we need to take these guys who are running around shooting guns off the street that comes from the police in public working together," said Detroit police commander Eric Decker. 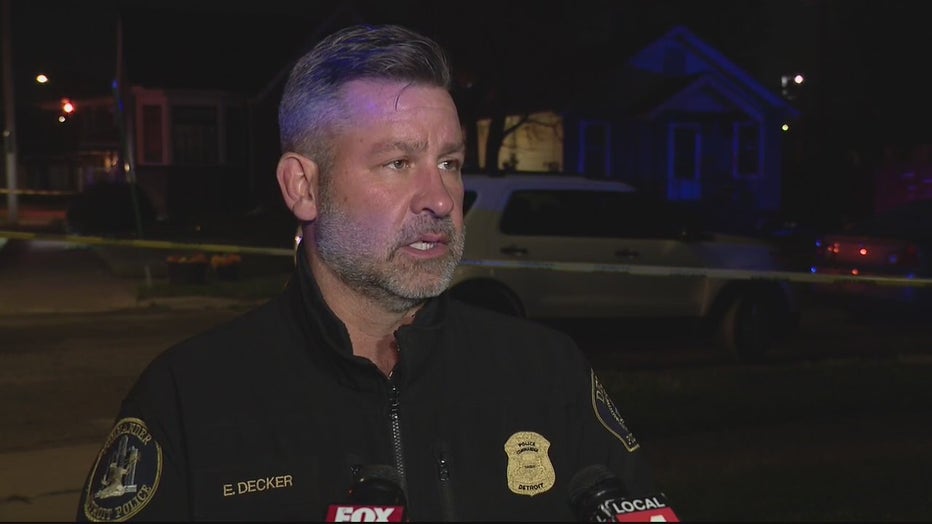 The shooting happened around 8:30 p.m. Neighbors living near Evanston and Somerset on Detroit's east side, where the incident occurred, were devastated to learn that violent crime had crept so close to their door.

The 8-year-old girl was shot in the arm. However, she's expected to recover.

Eric Burns, who lives nearby says his wife frantically called him after hearing gunshots near their home. Burns, who was outside picking up his grandson immediately called 911. A crime scene that spanned three blocks soon followed.

Police are asking people to be on the lookout for a burgundy-colored four-door Cadillac.

Macomb County public works officials are investigating the cause of a color change in a creek that snakes through one of Clinton Township's subdivisions.

On Sunday, both officials and homeowners were left confused by the bright green shade that the Cranberry Creek showed. "Yesterday we had so many ducks here, all kinds of birds, and there's nothing," said Susan Biernat. Typically, she says, the creek is a drab, brownish color.

Adding to the mystery of the creek color change is the lack of odor. It doesn't smell like anything. A spokesman with the county public works department confirmed that officials were investigating the creek.

Water samples have been collected while booms were placed downstream to contain whatever is in the water from leaching further. As of Monday morning, it's still a mystery.

A Michigan utility says it will add enough renewable energy through three solar projects in 2023 to power nearly 190,000 homes. The projects in the southern-central part of the state are expected to produce 375 megawatts of clean energy, according to Jackson-based Consumers Energy. Consumers Energy would own and operate one facility, while purchasing power from the other two. Agreements are awaiting approval by the Michigan Public Service Commission.

The solar developments are part of the company’s Clean Energy Plan to dramatically increase renewable energy, eliminate coal as a fuel source for electricity by 2025 and achieve net-zero carbon emissions by 2040, the utility said. The projects would come online in 2023.

The 150-megawatt Washtenaw Solar Energy Project near Ann Arbor is in development. Its ownership would be transferred to Consumers Energy which will operate the facility.

--Courtesy of the Associated Press

Rick Wershe is continuing to make waves in Detroit. The former FBI informant who spent decades in prison has already released his own weed brand, seen his star shine in a TV show, and now, donating an expensive piece of lifesaving equipment.

Wershe, who was at the Love Rising Lutheran Church in Detroit handing out meals this weekend, also presented a customized van for his longtime friend Raoul Van Hecke. Van Hecke, who was injured as a teenager and left paralyzed, was a pen pal and friend of Wershe while he was in prison.

Rick Wershe made a pen pal while he was in prison that turned into friendship that continues today. Raoul Van Hecke was paralyzed as a teenager, and today, Wershe decided to give his friend a helping hand.

"To give this kid the van today, it means the world to me. We're changing his life," said Wershe. "He couldn't get out of the house. The van that he had barely got to the doctor's office and we're presenting him with a brand new 2021 Toyota Sienna."

The customized van was purchased through donations from various companies. It required some $85,000 to buy the van.

The former pastor of a mid-Michigan church has pleaded guilty to embezzling hundreds of thousands of dollars from the church over several years, prosecutors said. Douglas Hammond pleaded guilty as charged to one count of embezzlement over $100,000 during a court hearing earlier this month in an Eaton County court.

Prosecutors said Hammond stole $285,000 from Olivet Assembly of God Church over nearly six years, from January 2014 through November 2019, when he was a pastor there. Hammond’s attorney, David Carter, said his client pleaded guilty on Nov. 12 because he "wanted to do what was right."

"He understands that he has disappointed his family and the church on so many different levels. He hopes that his family and church can one day forgive him as he seeks forgiveness with a repentant heart," Carter told local media. Yvonne Good, the treasurer of Olivet Assembly of God Church, said the church was not interested in commenting on the case.

Carter declined to comment on what Hammond did with the stolen money, but said there were "a lot of special circumstances" with the case. Hammond’s sentencing is set for June 9, 2022, due to concerns about his health, said Chris Anderson, Eaton County’s chief assistant prosecuting attorney.

--Courtesy of the Associated Press

The cold weekend is going to give way to an even colder week with temperatures remaining low to kick off Thanksgiving week. The good news is precipitation will remain low on travel days this week, so derailing driving and flying won't make things too difficult.

Hang on to an umbrella if you plan on being out this afternoon. Much colder air is on the way Monday and Tuesday, with a few spotty showers on Thanksgiving Thursday.

Waukesha officials say five people are deceased and more than 40 people are hurt after an SUV driver sped through a police line and into a Christmas parade in Waukesha, Wisconsin on Sunday.

Waukesha is a suburb of Milwaukee.

A suspect was in custody Sunday night.

Waukesha Fire Chief Steve Howard said late Sunday night that his department transported 11 adults and 12 children to hospitals, though it's possible that some victims were driven by others to hospitals.

Howard was asked about reports from witnesses that the suspect was also shooting.

"We do not believe there were any shots fired from the vehicle," said the fire chief. Police said that an officer had opened fire at the suspect.

"There were moms and dads yelling for their kids, people running around," said witness Jordan Woynilko, who shared a video of the aftermath on Twitter. "When I rewatched the video, I could hear people talking, and they were like, 'There's eight people injured down there. We need an ambulance over here.' There's one lady kneeling on the ground crying."