The driver can be heard saying that he had the green light, but the medics said they had their lights and sirens on.

DETROIT (FOX 2) - Two Detroit police officers are recovering after a suspected drunk driver crashed into their patrol car. It happened on the city’s east side around 12:30 Saturday morning.

The officers were blocking off a section of Gratiot and Rohns after an accident when the driver struck them. Their patrol car was left mangled with the driver's side losing its door after the crash.

Detroit Police Commander John Svec says his officers are lucky to be alive.

"They were banged up pretty good," he said. "They both don’t remember the accident, they have no recollection of what happened. The last thing they remembered, was they were at the accident scene and blocking traffic."

The suspected drunk driving crash comes after a FOX 2 report found the City of Detroit paid out nearly $4 million in settlements for Detroit police and fire department crashes over the past five years.

But Saturday’s crash makes apparent what one can reasonably assume - first responders are not always at-fault for crashes they’re involved in.

"I mean they were just parked in the middle of the road because there was already an accident there," Svec said. "They had their lights on, and he just was intoxicated so he was not paying attention - and unfortunately three people were injured there, the citizen included."

More: Detroit pays nearly $4M for police and fire crashes over past 5 years

And there was another crash this weekend involving a first responder.

A bystander recorded the aftermath of a devastating collision between a Chrysler 300 and a Detroit Fire Department ambulance at John R and Woodward downtown on the CrimeIntheD account.

The driver can be heard saying that he had the green light, but the medics say they had their lights and sirens on.

Chief James Harris of the Detroit Fire Department says the medics were headed to an emergency call when the driver of the Chrysler struck them.

DFD says the driver and passenger riding shotgun bailed from the scene leaving the car behind.

The two women in the backseat of it, as well as the two medics, were taken to a local hospital and treated for minor injuries.

That crash is still under investigation.

As for the suspected drunk driver who struck the parked patrol car- he was also seriously injured and required surgery. DPD submitted a warrant to get his blood alcohol content and he could end up facing stiff charges. 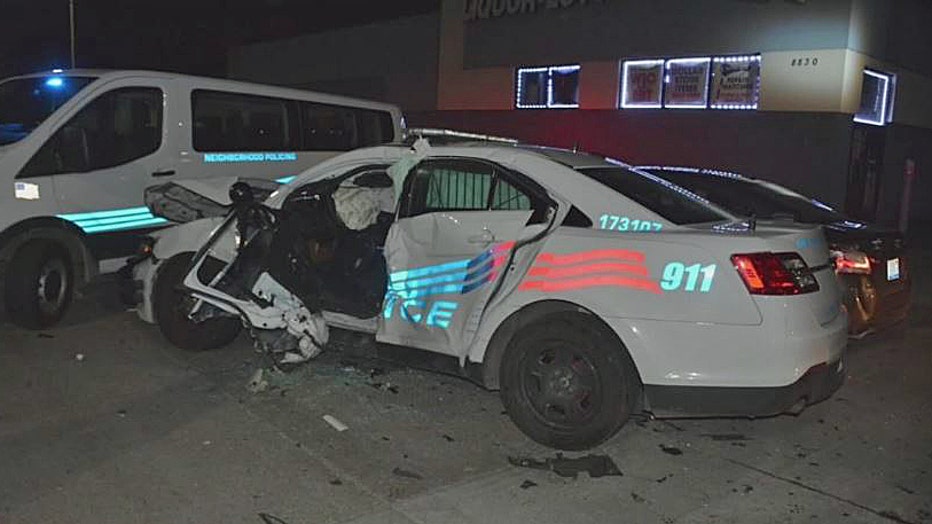