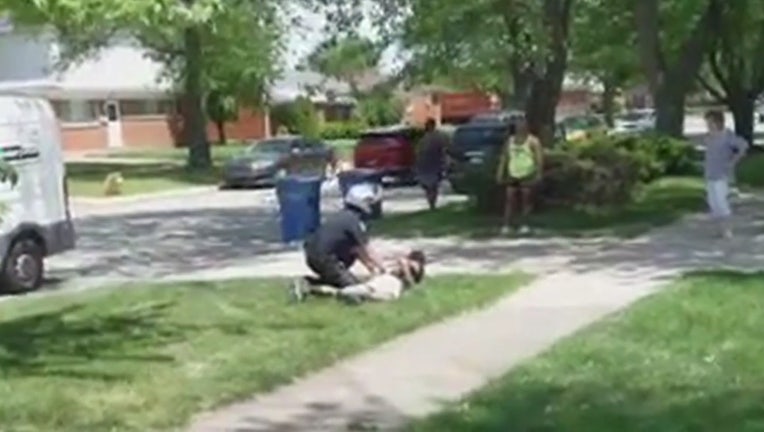 WARREN, Mich. (FOX 2) - Eight days since Jaylen Bond was arrested after a police officer demanded his license while he delivered a package from Amazon, his attorney is asking for Warren's top cop to retire.

Bond works as a delivery driver for Amazon packages. On June 9, he parked his delivery van on the wrong side of the road in Warren to drop off a package. He was confronted by a police officer who demanded his license.

Warren Police Commissioner Bill Dwyer said the officer asked for his license 11 times and Bond refused to comply and resisted arrest, leading to Bond's rough arrest. Cell phone video shot by a witness spread wildly online before Dwyer spoke the next day and said his department was recommending felony charges be filed.

Bond said he was terrified when he was arrested and when he heard what Dwyer said the next day.

"When he held me around my neck, I was terrified and I was scared that I was about to die. I couldn't breathe at the time he was holding me around my Adam's apple," Bond said.

He's been driving for 5 to 6 months for Amazon and said his company is letting him take some time while he recovers.

In dashcam video released by police, Bond said he was reaching for his license at seemingly the same moment the officer decided he was going to arrest him.

On Wednesday, Bond and his attorney, Don Andrews said the officer's actions were unlawful and unconstitutional. Additionally, Bond said Dwyer is 'gaslighting the public' with his statements about Bond's 'failure to comply' with the order.

"What we see is an officer looking for a confrontation that critically spirals out of control," Andrews said.

The attorney said Bond was walking towards a home with a package to deliver when the Warren police officer pulled up. He said the two spoke but Bond continued to walk towards the house to deliver the package.

At that point, he said the officer got off his motorcycle and stood between Bond and the delivery van while demanding his license.

Andrews said the offense of parking on the wrong side of a street was a parking ticket and the officer should have just written that and stuck on the window or the door.

"The officer was looking for a confrontation because he was mad because Mr. Bond, with the package in his hand, decided to quickly go up and give it to the person he was bringing it to," Andrews said.

He said the officer told Bond to "go get his license", indicating that he believed the license was inside the van. Andrews said if he was looking to identify him, he said that wasn't necessary for the ticket.

On a video released by Warren Police last Wednesday, the officer told Bond 'I told you to move and you decided to go up there anyway'.

Andrews said the officer moved closer as Bond reached for his wallet and even said he was 'stalking him' before he grabs Bond around the neck and throws him to the ground while holding him in a neck hold.

"You can hear Bond was very scared and despondent," Andrews said. "People around him are yelling for him to get on the ground because they understand, from what we've seen, this could go horribly wrong."

He said neighbors were incredulous when the officer tried to justify his actions.

"In our view, the officer was out of control and neighbors were fearful he might do something to Mr. Bond," he said.

He said the officer's actions were not appropriate for the situation. He said Dwyer has mischaracterized Bond's actions and believes Dwyer is more interested in protecting the status quo than pursuing real change in his officers.

"We expect the police to protect our citizens, not victimize them. Warren Police are not the victim in this situation," he said. "We don't see police officers attacking delivery drivers...for parking tickets."

Andrews said Bond is not seeking a lawsuit at this time but is instead asking Warren to make the meaningful change and asking Dwyer to step down.

"For these reasons, we believe Dwyer should retire because he is unable to pursue meaningful change within the Warren Police Department," Andrews said. "Is this the way we want police officers to act when they interact with the public for very minor offenses?"

He also said the officer involved should be retrained or "find a new line of work".

Andrews said the officer needs to have a reason for asking for his license and a parking ticket does not meet the legal standard.

"If he were driving, you have to produce your license to the officer for identification purposes. But for a parking ticket, which is what they claim and what they wrote a ticket for, you don't need a driver. you can write a ticket to the car," Andrews said.

Amazon issued a statement last week: "We see what others see in these videos, and it's unacceptable. We expect a swift investigation and full accountability for those involved. Amazon will deploy all necessary resources to investigate the matter with our delivery service provider, as well as to represent and support the driver."

Police have released a nearly 8-minute long video of the arrest of an Amazon driver who police stopped after he parked on the wrong side of the street.