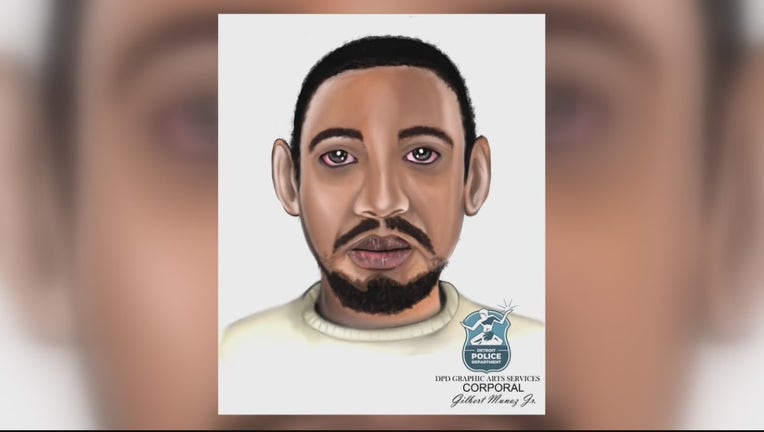 DETROIT - Detroit police are asking for people to be on the lookout for a man that fits the description of a rendering completed by the department, following reports of a criminal sexual assault attempt on the city's east side involving a 13-year-old girl.

The man had bloodshot eyes, badly chapped lips, and intense body odor, the department said. He allegedly tried to rip the girl's shirt off and kiss her last Tuesday.

"This guy approached her, drug her up on the abandoned house, kissed her, and tried to rip her shirt off," said DPD Cpl. Brian Herdon.

The incident happened last Tuesday shortly after class had gotten out. A 13-year-old girl had left Carstens middle school on Essex Avenue in Detroit for a short walk home when the man approached her.

Police said the two struggled after the man began dragging the girl by her hair. It was concealed by a bush in front of the home where the incident occurred.

However, it was a call from the girl's mother that frightened the suspect.

"She had a laptop that started ringing and it was her mom checking in on her why it was taking so long for her to get home from school," said Herdon. "That scared the assailant off. He ran off.

RELATED: Suspect dragged girl by hair, attempted to kiss and rip her shirt off, police say

"If that laptop or tablet didn't go off, who knows where this would have gone."

The man pushed the girl to the ground and ran away.

A rendering of a man with chapped lips and bloodshot eyes is what police are asking people to refer to if they identify the man involved in a criminal sexual conduct investigation after a 13-year-old girl was attacked last week.

The suspect is described as a Black male, in his 30s, about 5-foot-8-inches with a slim build.

In the meantime, police are asking parents to have their kids walk in groups when they come home. They also ask parents to know where their kids are at all times and have a timeline for when they'll come home from school.

"We need the community to help us keep an eye on him," said Herdon.