Detroit Police are searching for a man who hopped out of a moving car and shot up an SUV full of people on Sunday in Detroit and have released video of the shooting.

DETROIT (FOX 2) - Detroit Police are searching for a man who hopped out of a Chrysler 300 Sunday morning and shot up an SUV, hitting an 11-year-old boy, his father, and a third person.

Police said the shooting happened just before 8 a.m. in the area of Plymouth Road and St. Marys Street, near the Southfield freeway in Detroit when the car pulled up next to the black SUV. Video released by police shows the large black SUV pulling up next to the curb. One person gets out of a car across the street and then the Chrysler pulls onto St. Mary's.

The 300 stops for a few seconds and then pulls forward. As it pulls in front of a car across the street, a passenger jumps out and starts shooting into the SUV with some kind of assault-style weapon.

At least a dozen shots are fired at or into the SUV.

One person hops out of the front passenger seat and runs up Plymouth while the SUV is driven across the street into a parking lot.

Police said an 11-year-old boy, his 33-year-old father, and a third person were all shot and were hospitalized. All are reported to be stable.

The driver of the Chrysler was not seen on video but the shooter was. He's described as a Black man, with a slim build, dark complexion, and short hair. He was wearing a white t-shirt, stone-washed jeans, and black and white gym shoes.

"We are having is an issue with people being violent for no reason," DPD Cmdr. Arnold Williams said. "Right now people should be celebrating Father's Day and what we have is a father and a child at a hospital with gunshot wounds. We have an issue with gun violence in the city that is just ridiculous."

Sunday morning's shooting was one of at least a dozen across Metro Detroit from Friday until Monday morning. In total, 2 were killed and dozens were hurt including a 13-year-old boy in Inkster.

Anyone with information is urged to call the Detroit Police Department’s Sixth Precinct Investigative at 313-596-5640 or Crime Stoppers at 1-800-Speak Up. 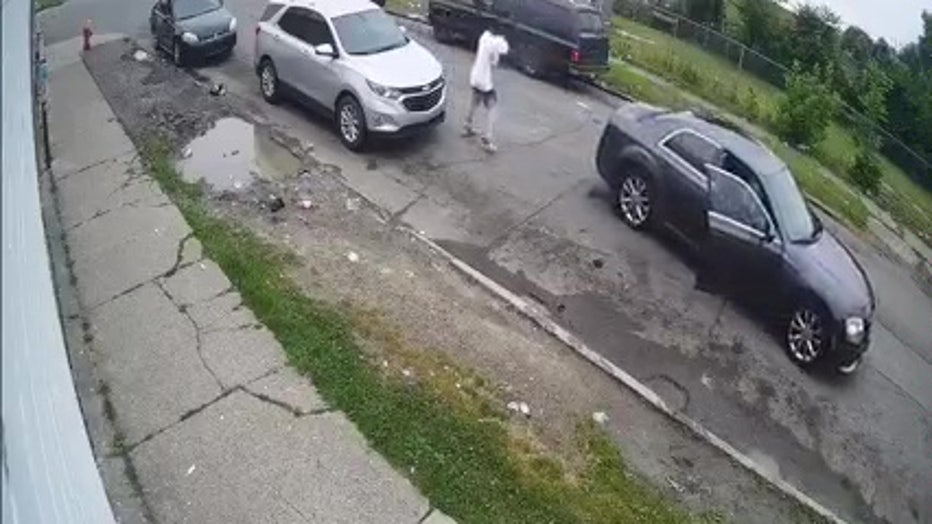 Detroit Police have released surveillance video of a shooting Sunday morning when an 11-year-old boy was among three people shot.