DETROIT (FOX 2) - "The right to protest is as basic as the right to vote," said activist Nakea Wallace.

But Wallace, from the group Detroit Will Breath, claims on Saturday Shelby Township police took away that right.  Members of the group - along with five protesters, were arrested that day for blocking traffic and say they were targeted.

Officers arrested the group for blocking traffic at 23 Mile and Van Dyke. But it's how the officers handled the situation that had the smae protesters speaking out Tuesday.

They were marching in protest against Shelby Township Police Chief Robert Shelide. Many are still upset about how he made racist online comments - and instead of being fired - was suspended - and given back his job of top cop. They claim promoting even more of a racist culture.

Officers arrested the group for blocking traffic at 23 Mile and Van Dyke. But it's how the officers handled the situation that had the same protesters speaking out Tuesday.

"I was never approached by police until Saturday," said Samantha Phillips. "Because Saturday wasn't about the protest, it was about sending a clear intimidation message.

"The officer horse collared me threw me to the ground, only to pick me up and throw me down again. I am littered with bruises and as a chronic pain patient, the weight of grown men on my back has caused further damage to my body."

After activists witnessed a half-naked Jessica Nadeau - a protester from Minnesota in the middle of the street - they took their anger to social media.

But recently released video from inside the police cruiser showed Nadeau taking her own clothes off proclaiming, "now police don't have to strip search (me)." 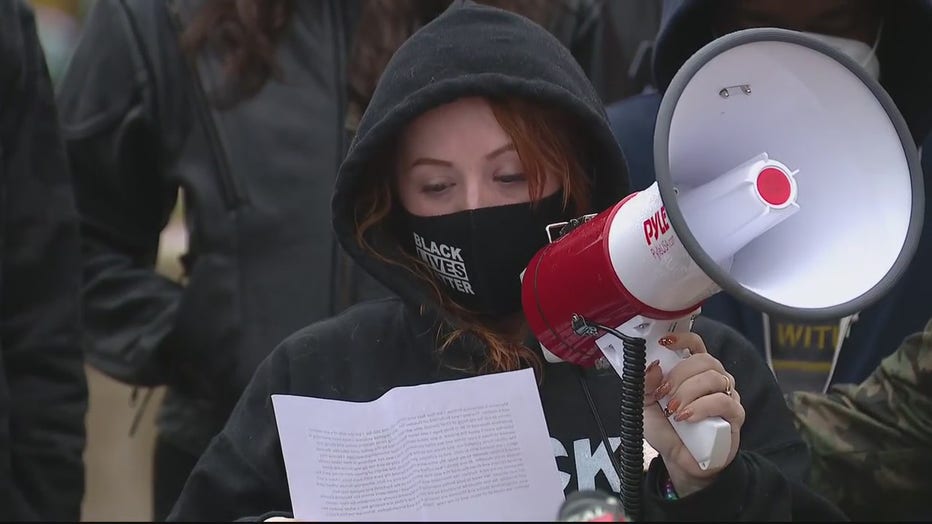 Which is why protesters say the officers should be punished.

"I will be out here protesting until we see justice - until we see accountability," said protester Justin Mann.

In the meantime, the protesters who bonded out, plan to fight the felonies, misdemeanors and tickets they are all facing after Saturday's protest.