Residents sounded off on the City Council meeting Tuesday when members met their constituents for the first time since a gas leak was reported in the city.

They didn't get many answers.

"Is someone going to hold (Ford) accountable and make them be accountable, that's what I want to know," said one resident at the meeting - as applause broke out. "Who is going to do that?"

The source has been identified - a benzene leakage at the Ford Mustang Assembly plant. The automaker also said it has since plugged the leak, using a firefighting foam in the line to overwhelm fumes from the chemical.

Since then, only trace amounts of the highly flammable liquid could be detected in Flat Rock's sanitary sewer system. About 1,400 gallons of fuel leaked from the storage tank last week.

Neither representatives from Ford Motor Company or the EPA were present at meeting - much to the dismay of angry residents concerned about the state of public health and environmental quality.

"Ford should be 100 percent accountable for it and not the taxpayers," said Justin Kuta. "And that's just how I feel - and I am sure I speak for everybody else."

"We have people looking for answers out there," said resident Aurora Kuta. "I feel like we are leaving more confused. I told my husband I am going to go in and when I walk out I want to feel like I just got baptized. I did not feel that today. I felt more confused than when I walked in."

Among the questions that could be answered was worries about drinking water. Flat Rock Mayor Mark Hammond said that system is entirely separate from the sewer system and the leak wouldn't impact drinking water.

Jill Greenberg with EGLE said that in addition to plugging the leak, firefighters were flushing the system that "eliminated the flammable hazard portion."

Officials announced the evacuation of more than a thousand homes in two impacted areas. It is unclear when evacuees will get the green light to return to their homes.

"That is all I want, is for somebody to say you are going to be out of your house for three months," said one resident at the meeting. "Fine, I can plan that. But tell me something and not kick the can down the road and I'm living at my in-laws, because the hotel I got is too damn far from my inlaws and my kids' activities."

Ford paid for residents to stay at area hotels and provided gift cards to cover the costs of other expenses - but some say they are falling through the cracks. 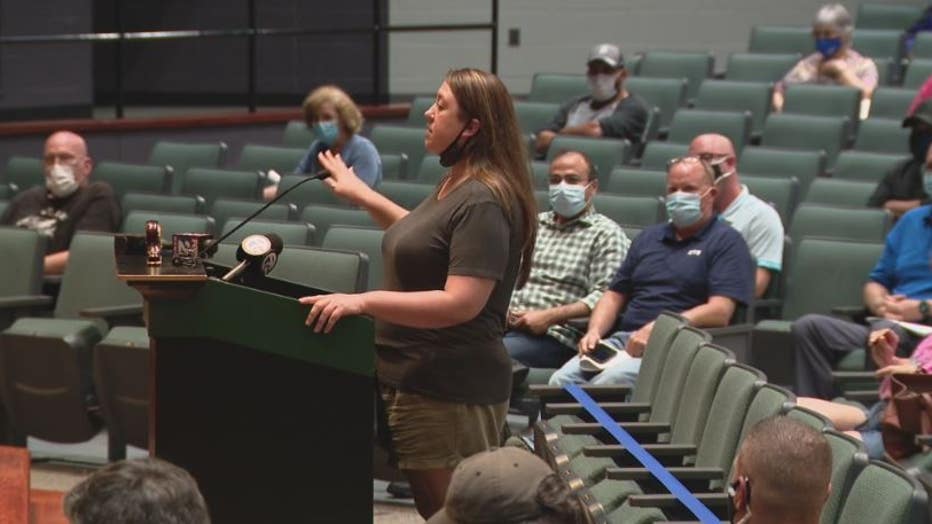 "So I checked in yesterday and they said you get free meals," said resident Rose Ruber at the council meeting. "Two free meals for dinner, and two for breakfast … and Ford is paying. Today I get the meals and they said ‘No, Ford took it back.’ They aren't paying for the meals."

Hammond told the public to call 211 to get hotel vouchers and gift cards for food. But residents at the meeting said they are not getting the help they need when they call that number.

A Ford spokesperson said they understood the council meeting was for just addressing traditional city business.

Ford does plan to be at the virtual town hall Wednesday night about the gas leak. The city said also invited to participate will be EGLE, the EPA, and the state's health department to field the many questions from residents.

Congresswoman Debbie Dingell is expected to speak at an EPA press conference Wednesday morning that will address the area's gas leak. FOX 2 will stream the conference, which begins at 9 a.m.

Dr. Haley Murphy, the current deputy director at Zoo Atlanta, will be the Detroit Zoological Society's first female director at the zoo's 93-year-old history. A release from the DZS said Murphy had more than 30 years of zoo experience, is one of the country's leading experts in gorilla cardiac health, and has a strong background in zoological veterinary medicine.

Murphy will begin her position Nov. 1. Her selection followed months of looking by the DZS Board and a recruiting firm that specializes in mission-driven clients. She is replacing Ron Kagan, who filled the role for 28 years. 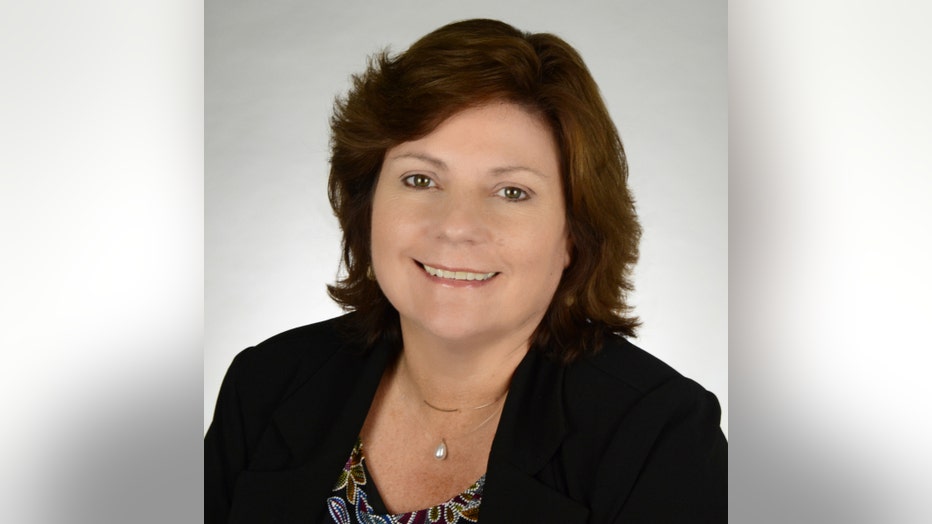 "Animal welfare, education, research and community engagement are critical to the future of our planet, and I am excited to lead an organization so clearly aligned with this mission," said Murphy.

Murphy assumed her role in Atlanta after a series of promotions to increasingly responsible management positions. She has 30 years of experience with the Association of Zoos and Aquariums. She also serves on the group's Ethics Board and professional development committee. Prior to her promotion to deputy director, Murphy was the senior director of veterinary services and the vice president of animal divisions.

Power knocked out for 88K DTE customers after storms

Stop us if you've heard this before: Thousands were left without power after severe weather rolled through Metro Detroit. Because it happened - again. Some 88,000 residents lost power in Southeast Michigan, primarily in northern Oakland and Livingston County. Another 47,000 Consumers Energy customers were also still without power Wednesday morning.

A series of storms hammered the region after rolling through early evening. Hail and high winds damaged cars, homes, and prompted a tornado warning in Monroe County for a bit Tuesday night as well.

An approaching cold front could bring the threat of an isolated tornado today. Do you know the signs of tornado development? What would you do if a Tornado Warning was issued? Learn all about tornadoes in this installment of Weather or Not by Meteorologist Lori Pinson.

Even as the summer winds down, the chance for severe weather appears to be sticking around a while longer. That's probably not good news for the renters and homeowners that have suffered through multiple bouts of flooding

So how do tornadoes form, exactly, Meteorologist Lori Pinson shows us in the video below. You can get more videos like this on our Weather or Not page.

A trash hill in front of a vacant house grows higher

For perspective, FOX 2's Jessica Dupnack is 5 feet tall – and a stack of trash growing in Detroit is much taller than her and wider. Neighbors say it’s been sitting here for a week and a half in front of a vacant house in an east-side Detroit neighborhood.

"The smell when it gets hot you don’t want to deal with it," an angry neighbor said. The trash heap is collecting flies and frustrations. "I know there is probably a lot of feces, it stunk real bad," the neighbor said. "I don’t know what they found when they cleaned (the house) out."

For perspective, Jessica Dupnack is 5 feet tall – and this stack of trash is much taller than her, and wider. Neighbors say it’s been sitting here for a week and a half in front of a vacant house in an east side Detroit neighborhood.

The guts of the house off Coram Street is owned by "Bonjour Detroit LLC"  which has been ticketed for blight issues three times by the city of Detroit in January at the same property. The neighbor - who didn’t want to share his identity, says the contractors who did the cleaning, told him "don’t worry, we’ll take care of it."

"You wouldn't see it out in the suburbs so we can’t accept it here," said Jessica Parker, Detroit chief enforcement building department. Parker says the LLC accepted responsibility for the earlier tickets and paid them last month. Now, they will be cited again.

"We don’t want to have any neighbor looking at trash on the site," she said. "It is unacceptable." Within the next week or so – if Bonjour Detroit LLC hasn’t handled it, the city will.

Detroit police officers came to the rescue of a 1-year-old child brought by frantic parents to the 5th Precinct station Saturday morning.

The little girl, named Selvyn, was rushed to the station barely breathing and unresponsive at 7:30 a.m. Detroit Police Department Patrol Sgt. Kevin Treasvant was the first to help, checking for signs of life on the toddler then immediately administering chest compressions helping the girl regain consciousness.

Officer Ruiz-Cruz and Officer McCombs rushed her to nearby St. John’s Hospital while multiple units assisted by clearing roadways and blocking traffic. When they arrived at the hospital, emergency room personnel provided medical care and the 1-year-old survived. The actions of these officers likely saved the child’s life.

"These officers are true heroes," said Detroit Police Chief James E. White. "This is another shining example of extraordinary service that so many members of the Detroit Police Department display each and every day."

Michigan will kick its severe weather bug for the rest of the week after Tuesday night's storm hammered the region. Temperatures will start in the 60s and get up into the mid-70s. An isolated shower is possible tonight, but it won't be big.

Temps top out in the 70's the rest of the week with limited rain chances.

Britney Spears' father has filed a petition to end the singer's conservatorship.

While the conservatorship isn't officially over just yet, Jamie Spears had been working with the Los Angeles County court and his daughter Britney's attorney for weeks to prepare an "orderly transition to a new conservator." But with Tuesday's development, it appears the conservatorship is on the verge of ending all together.

Tuesday's development marks a major victory for the #FreeBritney movement as the singer herself had been pushing to remove her father, Jamie Spears, from the conservatorship.