A 27-year-old man is dead and five others are injured after gunfire erupted at a Detroit banquet hall on Chalmers.

DETROIT - Six people were shot and one died from gunfire at a Detroit banquet hall early Tuesday morning, according to Detroit police.

Officers responding to the Chalmers banquet hall around 2 a.m. said that more than 100 people were attending a gathering when shots were fired.

The deceased victim was a 27-year-old man. He had been bound to a wheelchair from a previous shooting. Family members told FOX 2 the victim was an innocent bystander caught in the crossfire. However, during an update Tuesday afternoon, interim Detroit Police Chief James White said that the victim was targeted.

The banquet hall is located near Chalmers and East Outer Drive and, according to White, the facility has not had a proper license to do business since at least 2013. He said the police department is in the process of shutting down the facility.

White said more than 100 people were at the location when the shooting happened. He said there are previous issues with the business over the past several years.

The suspect was arrested shortly after White spoke about the shooting. His name was not released.

The person killed was a man in his 30s. Two men and three women were also hit by gunfire, but their injuries are not believed to be life-threatening.

"We don't have a lot of witnesses standing out here, giving us the story, and that's what we need to know," Commander Eric Decker said. "6 people shot, somebody lost their life and nobody is pounding our doors down to tell us what happened." 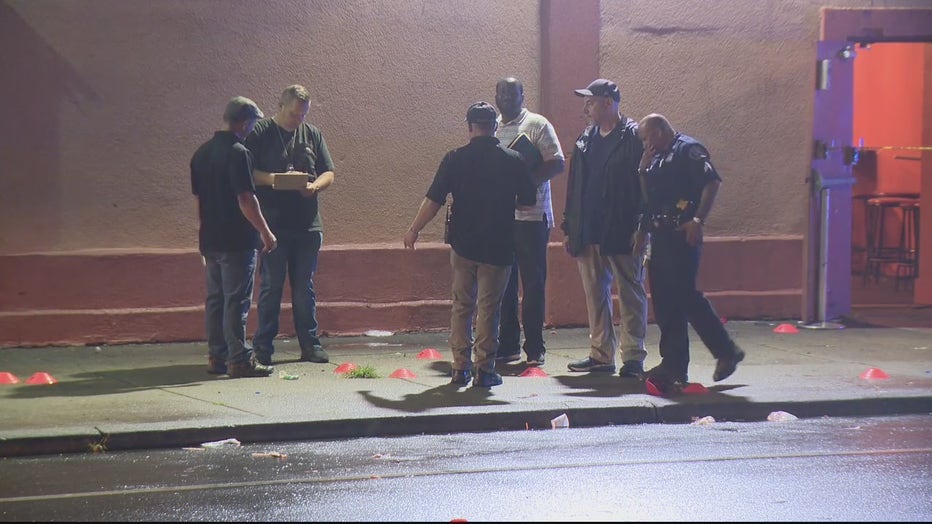