Drivers talk about the pain at the pump

All the talk about temporarily taking away the state gas tax has a lot of people talking. Some people tell FOX 2 they drive across the country— and cross state lines for family.

MONDAY NEWS HIT - Michigan drivers are paying about 8 cents less per gallon than they were last week, offering an incremental amount of relief amid sky-high fuel costs in the U.S. and beyond.

In Michigan, the highest prices were in Marquette at $4.28 a gallon, followed by Traverse City at $4.22 and Ann Arbor at $4.19. Those in Metro Detroit were paying about $4.18 a gallon - 7 cents less than last week's average.

RELATED: What are gas prices around the world?

While they spiked to record-levels in response to Russia's invasion of Ukraine, gas prices are now trending in the opposite direction based on a new COVID-19 outbreak in China, which prompted the country to lock down several major cities.

Fear over a drop in demand similar to what happened at the onset of the pandemic has sent prices falling again.

RELATED: Can you mix premium and regular gas to save on fuel costs?

Drivers might see some limited short-term relief in the form of a suspension of gas taxes typically paid at the pump. After vetoing legislation that would have suspended the state gas tax for 6 months, Gov. Gretchen Whitmer proposed pausing the levy.

The bill she rejected wouldn't have gone into effect until next year due to it not receiving a two-third's majority vote. However, on Friday Whitmer proposed temporarily freezing it as a way to lower pump prices while keeping funding for roads, bridges, and schools in place.

"A short-term pause is a fiscally-responsible action we can take that will provide drivers relief at the pump right now — not next year — while also protecting funding for road repairs and save tens of thousands of good-paying construction jobs," she said.

Before discussions of the state gas tax, Whitmer and several other governors called on the Biden administration to suspend the federal gas tax.

Twenty two-year-old Diamond Shelton drowned Friday, March 18, after jumping into the Detroit River to help one of her cousins who'd fallen in. Diamond's family held a vigil to honor her and to say their goodbyes on Sunday afternoon. The family wore diamond-shaped stickers; her mother had diamond shapes shaved into her hair.

Diamond Shelton died after jumping into a canal to save her cousin who'd fallen in. Another cousin at the scene also tried to help.

"You came together you leave together. We always looking out for each other. Blood look out for blood," said Tiffanie Williams, a cousin of Diamond's. Diamond, along with two of her cousins, were at a canal on the Detroit River when around 4 a.m. one of them fell in.

Diamond jumped in to help her cousin. The other cousin called 911 and also jumped in to try and help. "Her instinct just jumped in - she didn’t think about that she couldn’t swim. She just felt like ‘I gotta help’," said Denise Williams, Diamond's aunt.

"You see family in distress first thing you want to do is help out," said Tiffanie. Detroit police and firefighters responded to the scene and all three women were pulled from the water. The two cousins survived, but Diamond later died. Diamond was a mother of a 1-year-old baby girl. The family set up a GoFundMe to help fund a proper burial for Diamond. Anyone interesting in donating can do so here.

The beginning of Michigan's next big road construction project kicks off Monday. Orange barrels lined the right shoulder of I-96 in preparation for what will be three years of roadwork to add another lane onto a 12-mile stretch of roadway in Oakland County.

The flex route, going from the I-275/M-5/I-696 interchange in Novi to Kent Lake Road near Milford Charter Township, will cost $300 million. It's the second flex lane that Michigan Department of Transportation will be adding, following the rebuild of US-23 north of Ann Arbor years before.

Road closures will begin this week as MDOT crews begin a three-year, $300 million road project to add another lane onto a 12-mile stretch of I-96 in Oakland County.

During median drainage work, I-96 traffic will have three eastbound lanes and two westbound lanes between Wixom Road and the I-275/I-696/M-5 interchange. These ramps will close during this stage:

An FBI informant who made hours of secret recordings faces cross-examination by defense lawyers Monday after telling jurors that four men wanted to kidnap Michigan Gov. Gretchen Whitmer before the fall 2020 election. Dan Chappel testified for the government Friday, explaining how months of training and scheming led to a road trip to Whitmer’s vacation home in northern Michigan to see how the group could pull off an abduction.

The FBI, which had infiltrated the group, said it made arrests before an explosive could be obtained. The fifth day of testimony is set for Monday in federal court in Grand Rapids, Michigan. Adam Fox, Barry Croft Jr., Daniel Harris and Brandon Caserta are charged with conspiracy.

They’re portrayed as antigovernment extremists who were willing to turn to violence after Whitmer and leaders in other states imposed stay-home orders and other restrictions during the COVID-19 pandemic.

Chappel, 35, an Army veteran, explained how he went from simply looking for camaraderie among gun-rights guys to becoming an FBI operative winning the confidence of the men and recording their conversations. He made key recordings during trips to look at Whitmer’s second home in Elk Rapids and a nearby bridge where a bomb might distract police during an abduction.

A traffic stop for equipment infractions has led to the seizure of more than a dozen firearms as well as multiple prescription medications. According to Michigan State Police's Bay Region, a 45-year-old driver from Flint was pulled over for traffic violations.

He was found with a loaded, concealed 10 mm pistol in his waistband. After that, police executed a full search of his vehicle, which revealed four more illegal firearms, two of which had been stolen. One had the serial number scratched off.

The search also found suspected forms of Adderall, Clonazepam, Valium, Vicodin, Tramadol & crack cocaine in the car. The man's house was later searched following the execution of a search warrant, where 11 firearms and ammunition was found. 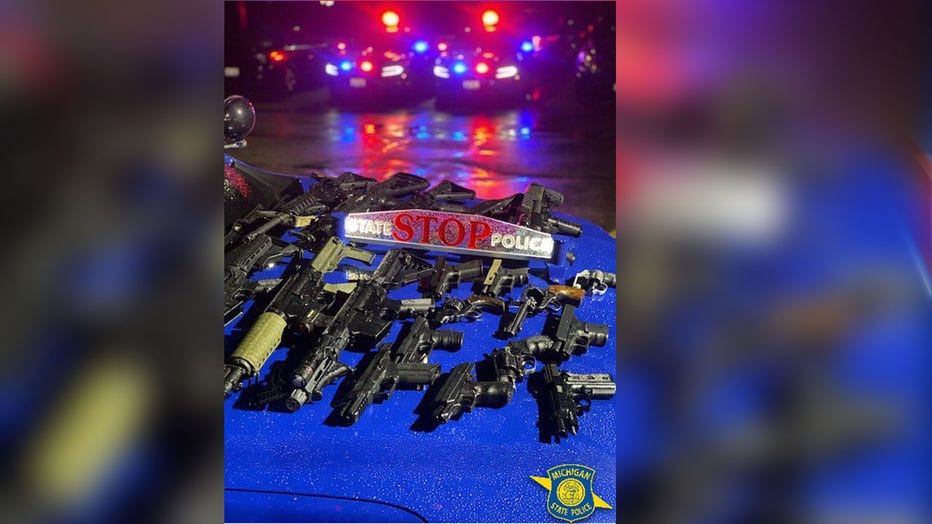 The driver was lodged at Genesee County Jail.

A dry and warm Monday is upon us, but don't plan on the nice conditions lasting this week. We're in for a cold and rainy rest of the week with temperatures falling to their lowest point over the weekend.

A dry day to start the work week, but periods of rain developing as we head toward the upcoming weekend. Meteorologist Lori Pinson has your forecast.

Historic confirmation hearings begin on Monday for Judge Ketanji Brown Jackson, who would be the first Black woman on the U.S. Supreme Court.

Jackson, a 51-year-old who has served as a federal judge for the past nine years, will go before the Senate Judiciary Committee, beginning at 11 a.m. ET. She is expected to present an opening statement Monday afternoon and then answer questions from the committee's 11 Democrats and 11 Republicans over the next two days.

Jackson will be introduced by Thomas B. Griffith, a retired judge for the U.S. Court of Appeals for the District of Columbia Circuit, and Lisa M. Fairfax, a professor at the University of Pennsylvania Carey Law School.

She appeared before the same committee last year, after President Joe Biden chose her to fill an opening on the federal appeals court in Washington, just down the hill from the Supreme Court.