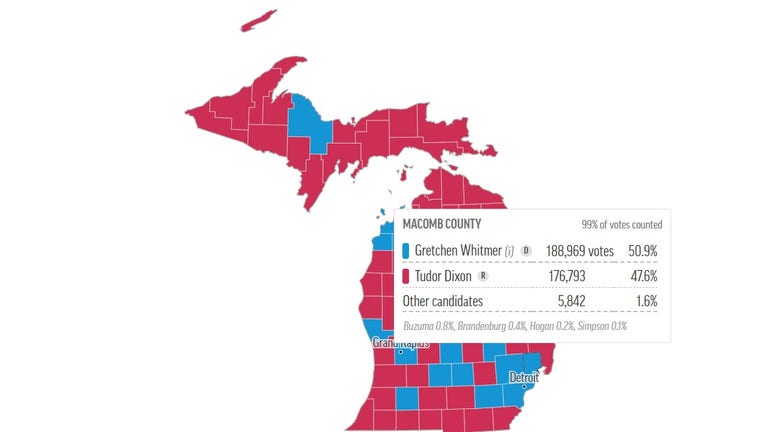 SOUTHFIELD, Mich. (FOX 2) - Michigan Governor Gretchen Whitmer has been elected to a second term leading the state after being declared the victor over Republican challenger Tudor Dixon in the 2022 Midterm race according to the Associated Press and FOX News.

The race was called for Whitmer by FOX News around 11:15 p.m. on Tuesday with 33% of the vote counted. At the time, Whitmer had 51% compared to Dixon's 46.6%. Two hours later, the Associated Press also called the race for Whitmer's lead reached 8 points. Dixon, as of late Tuesday night, refused to admit defeat until all the votes were counted.

But how, exactly, did each Michigan county vote? Whitmer carried the counties of Oakland and Wayne, which was expected but was also won by a slim margin over the Republican strongholds of Macomb and Kent counties.

Below, you can see exactly how every county voted in the race for governor.

Click the tab ‘county leader’ to view results by each county. Then hover or tap the county to see results.

"I am so happy to be here with you and my family and my partner in governance and all the phenomenal Michiganders who worked so hard to make sure our voices were heard, to make sure we set our state on the course that is focused on the future," Whitmer said early Wednesday morning.

Whitmer scored big vote totals in several counties in Michigan, gaining the majority vote in nearly 20 counties including the state's most populous. While she scored big totals in Washtenaw County where Ann Arbor is located, Whitmer also won big in Oakland County, showing just how blue the previously-Republican centric district had become.