Judge Cheryl Matthews also considered a date for the eventual trial of James and Jennifer Crumbley on charges of involuntary manslaughter, narrowing on Oct. 24. She said she would wait until expected motions were filed by defense to officially schedule it.

Concerned about the backlog of cases piling up in the court system, Matthews offered the date with the stipulation that it would be difficult to change. She estimated jury selection could take up to a week.

It would take a "Herculean effort" by her staff to get things prepared for the Crumbley's trial.

"It's hard to predict how long the trial will go," Matthews said Tuesday.

James and Jennifer Crumbley had requested another bond reduction in hopes of having a chance to be released from jail, asking for a $100,000 cash surety bond. It will remain at $500,000 per defendant.

"The defendants indicate they were devastated when they heard about the alleged actions of their son, felt unsafe in their home, felt hounded by the press, and found it necessary to leave," Matthews said, referring to the Crumbley's fleeing after a warrant was issued for their arrest. "However, the chronology of events that occurred subsequent to the defendants leaving their home is not consistent with cooperation of law enforcement."

Based off of the actions taken by the Crumbleys the day they were charged, Matthews said she believed they were fleeing the jurisdiction.

"I don’t think there is a lawyer, jurist, or member of the public who thinks that that was not an attempt to flee. It absolutely was. It wasn’t a close call," she said.

Both said they planned to work out any problems with the prosecution before filing anything.

In late March, the Crumbleys were appointed separate independent lawyers on March 22, in addition to the duel representation by attorneys from the same firm. It was their first appearance since they were ordered to stand trial on the charges and were bound over. 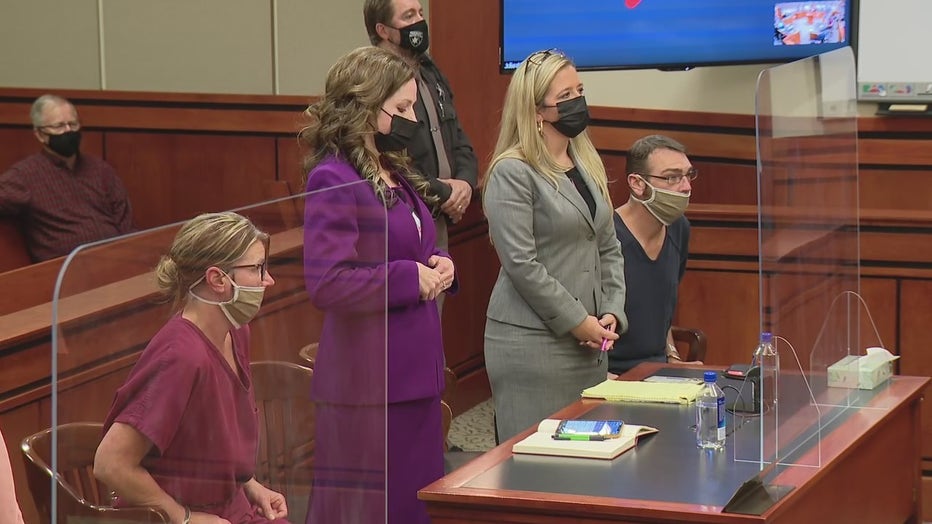 Oakland County Circuit Court Judge Cheryl Matthews made the move to appoint more legal counsel over concerns that were a mistrial declared from conflicting interests from either party, it could lead to an extended waiting period for the Crumbleys due to a backlog of cases.

Ethan Crumbley continues to appear in court for monthly reviews by a judge as part of the state's juvenile detention rules that a minor staying in adult jail have their status examined.

Should James and Jennifer Crumbley have attorneys from same law firm?

The Oakland County prosecutor is concerned about James and Jennifer Crumbley being represented by lawyers from the same law firm during their trial. The Crumbleys were charged after their son Ethan Crumbley allegedly killed four people at Oxford High School.

"Now my mom thinks I take drugs," one text read, according to the prosecutor. "She thinks that’s the reason why I’m so mad and sad all the time, and she doesn't worry about my mental health. They make me feel like I’m the problem."

Another text from Ethan Crumbley to his friend indicated that he had asked his father, James, "to take me to the doctor but he just gave me some pills and told me to suck it up," the prosecutor read during the hearing.

At one point, Ethan told his friend in a text: "I need help. I was thinking of calling 911 so I could go to the hospital but then my parents would be really pissed," according to the exchange read in court.

Hopkins said he spoke with Ethan Crumbley after concerning drawings and words were found on an assignment the day of the school shooting.

Hopkins said he "was concerned about suicidal ideation" and contacted Ethan Crumbley's parents to meet with them.

Jennifer and James Crumbley were shown the note and advised that Hopkins was concerned for his well-being. Hopkins testified that he didn’t recall Jennifer speaking to her son during the estimated 15-minute meeting and that James looked over the math assignment with Ethan and told him, "you have people you can talk to."

The counselor testified that he told the couple Ethan needed mental health support "as soon as possible, today if possible." But he noted that Jennifer said she had to return to work that day and it wouldn’t be possible within that timeframe.

"I was taken aback by that," the counselor testified. He added that he then told the parents, "I want him seen within 48 hours. I’ll be following up."

When is the trial for James and Jennifer Crumbley?

FOX 2 reporter and legal analyst Charlie Langton said he expects the trial of the Crumbley parents to happen towards the end of 2022.

They're both being held in custody on a $500,000 bond and, because they're both detained, they are deemed a priority.

When it comes to scheduling on the court's docket, suspects in custody for any crimes are given priority over suspects who are out on bond.

The strategies that either legal team uses may depend on the timing of the trials for Ethan or James and Jennifer. Their case strategies may also change if Ethan chooses to take a plea deal.

Ethan could testify that his parents had no involvement or the prosecution could call him to support their case. Langton said that is unlikely due to his age.