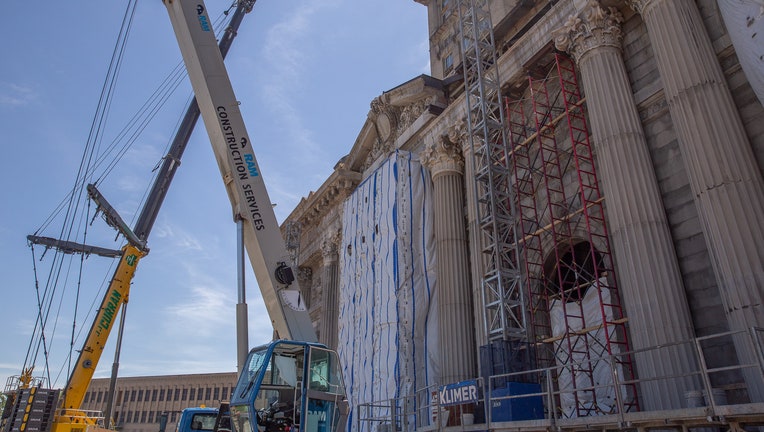 DETROIT (FOX 2) - The last capital stone on Michigan Central Station's façade was recently installed, making way for the next stage of restoring the iconic building.

The masonry that those capitals support will be rebuilt next. Then, the roof will be restored.

Crews have been working on Michigan Central Station since Ford Motor Co. bought the historic train depot in 2018. When Ford took ownership, Michigan Central was in a state of despair after years of being empty and neglected.

A big focus during the process has been restoring MCS to its former glory, back when it was a bustling train station and not a symbol of decay in Detroit.

None of the building's capitals were intact when the project began, so a CNC router was going to be used to blend photos of the damaged capitals and make a perfect image of what an undamaged one should look like. However, the complexity of the capitals caused the machine to crash.

Carver John Goodrow Sr. from Capital Stoneworks spent 428 hours last October and November crafting a capital from a 21,000-pound block of limestone. What he carved became the model for the rest of the pillars.

The train station project is in its third and final phase. This phase includes finishing and restoring the inside of the building.

When done, Michigan Central will be part of a Corktown campus that Ford is creating. The end goal is to have a walkable area that connects Corktown to Mexicantown.

Related: Share what you want to see done at, around MCS

MCS will house members of Ford's autonomous vehicle team. The automaker has said it plans to keep the main floor of Michigan Central Station open to the public. Early renderings showed markets in this space.