'It was apocalyptic'; drivers brave another wet morning in Metro Detroit

Thunderstorms Thursday morning soaked Michigan again, leaving hundreds of thousands without power, and drivers to traverse a maze of flooded freeways in and out of the city.

DETROIT - Residents awoke to a familiar sound Thursday morning: pouring rain, booming thunder, and the building splashes of flooded streets. That means delays on the roadway, potentially dangerous driving scenes, and the always fearful glance downstairs to see if standing water emerged in the basement.

You could say rinse and repeat - but that would mean even more water.

Here is a list of every major road closure. We're updating it regularly.

There were also flash flood warnings that were listed in Oakland, Wayne, and Macomb Counties until 9 a.m. Those have since been downgraded to flood advisories, which will be in effect until 11:30 a.m.

A severe thunderstorm warning was in effect in parts of Wayne, southeastern Oakland, and southwestern Macomb until 8:15 a.m. Rain was still over southern parts of Wayne and Monroe County by 9:20 a.m.

Even Michigan Public Radio had some trouble getting started this morning as Ann Arbor/Detroit station WUOM reported losing power and going off the air. Its generator also failed.

Most of the inclement weather is expected to have moved on by 10 a.m. and will remain to the south of us for much of the day.

Regarding traffic closures, the usual culprits including I-94, M-39, and I-96, are experiencing heavy flooding, delaying traffic.

The Michigan Department of Transportation has managed to reopen some lanes, but blockages remained.

Here's where flooding and other issues are showing up:

There's also a massive number of power outages across the region.

Consumers Energy says more than 4,900 outages are affecting more than 235,000 of its customers, according to its outage map.

Where the outages occurred is pretty indiscriminate - with every city in Metro Detroit from St. Clair County to Monroe, Washtenaw and Livingston have tens of thousands without power. 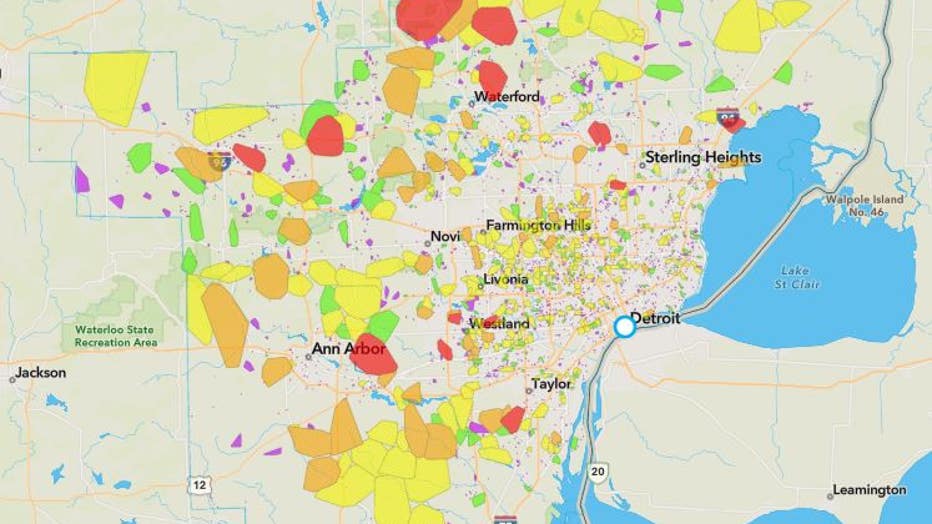