Lily Stotland, mother of two who is now 8 months pregnant says this Mothers day was extra special after catching COVID during her current pregnancy.

LANSING, Mich. - Michigan is closing in on its first vaccine milestone, according to a new dashboard tool the state unveiled last week.

So far, 54% of the state's adults have gotten at least one shot of the vaccine.

The Mi Vacc to Normal plan released by Gov. Gretchen Whitmer in April outlines a baseline guide for opening Michigan back up. And step one on that plan would begin once 55% of the state has gotten protected.

Once 4,453,304 adults over the age of 16 have gotten a shot, with an additional two weeks of waiting for immunity to kick in for patients, the state will allow all in-person work for all sectors of business to resume.

It's a small relaxing of rules and not one that has boiled at the center of controversy over coronavirus restrictions during the pandemic. But as Michigan elevates its protection coverage, more of the state will open.

So far, about 60,000 more people need to initiate their vaccination to reach the first benchmark. 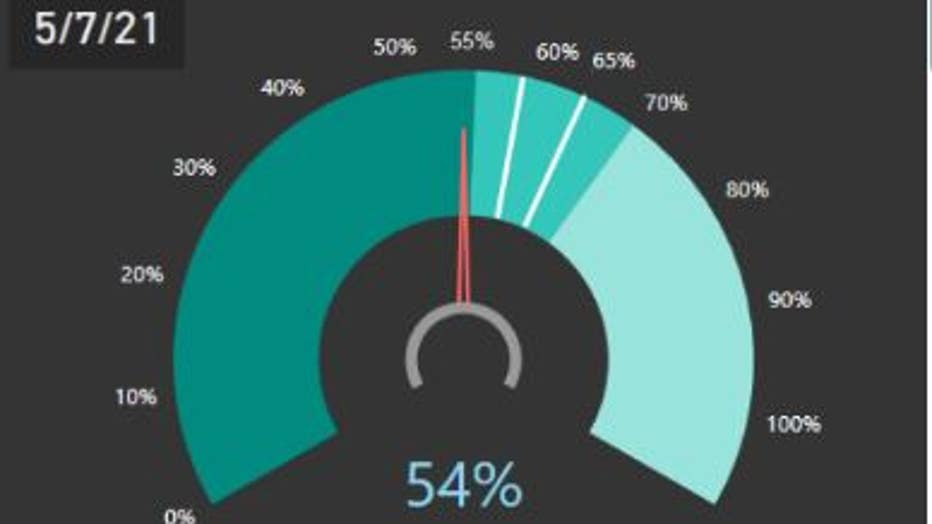 So far, 54% of the state's adults have gotten at least one shot of the vaccine. (Screenshot via Michigan Department of Health and Human Services website)

But public health experts weren't worried about reaching 55% coverage. It's the 70% goal established by the state last year that seems more out of reach. The rate of new vaccinations has fallen sharply in the past couple of weeks.

In the first full week of May, 153,821 residents got their first shot.

RELATED: Does a COVID-19 vaccine give you more protection than a previous infection?

Approximately another 1.3 million adults will need to get their first vaccine dose before the state gets to that point.

There are also questions about what immunity may mean in the future. At least 900,000 Michigan citizens have contracted the virus, which could build on statewide protection. But experts warn this kind of thinking doesn't factor in the uncertainty of protection that post-infection offers.

Vaccines offer at least six months of protection and likely much more. However, that hasn't been completely determined due to the short time the vaccine has been on the market. Immunity from a previous infection is less known.