LANSING, Mich. (FOX 2) - The abrupt resignation of Michigan's director of the Department of Health and Human Services on Friday was the hot topic at Governor Gretchen Whitmer's COVID-19 press conference Monday afternoon but the governor sidestepped every question aside from commending Gordon for his efforts.

Whitmer, chief medical executive Dr. Joneigh Khaldun, and new MDHHS director Elizabeth Hertel spoke during Monday's press conference. Khaldun said Michigan's COVID-19 numbers are improving with a 72% drop in the numbers of cases per million, positive tests are at 6.2% (down from 14% in November), and 9.2% of all hospital beds are COVID patients.

As Michigan Gov. Gretchen Whitmer announced the new MDHHS director, the administration is also concerned about the new strain of the COVID-19.

But the new strain is a big concern in Michigan.

"There are now at least 13 variant cases that are confirmed in Washtenaw County and there are four, that we know of, in Wayne County. There are likely more cases that we have not yet identified," Khaldun said.

The good news is that the COVID-19 vaccines that have been developed appear to work against the new strain.

Whitmer did not address the resignation of Gordon aside from introducing Hertel but was pressed multiple times by members of the press. First she was asked if she requested his resignation.

"I want to thank Robert Gordon.

Then she was asked to describe her relationship with Gordon.

"I don't think I have anything to do to add to my comments about the former director," she said.

For the second time, a reporter questioned if she asked for his resignation.

"I've answered that question. The only thing I would say is it's been a grueling couple of years and changes in administrations happen," Whitmer said. 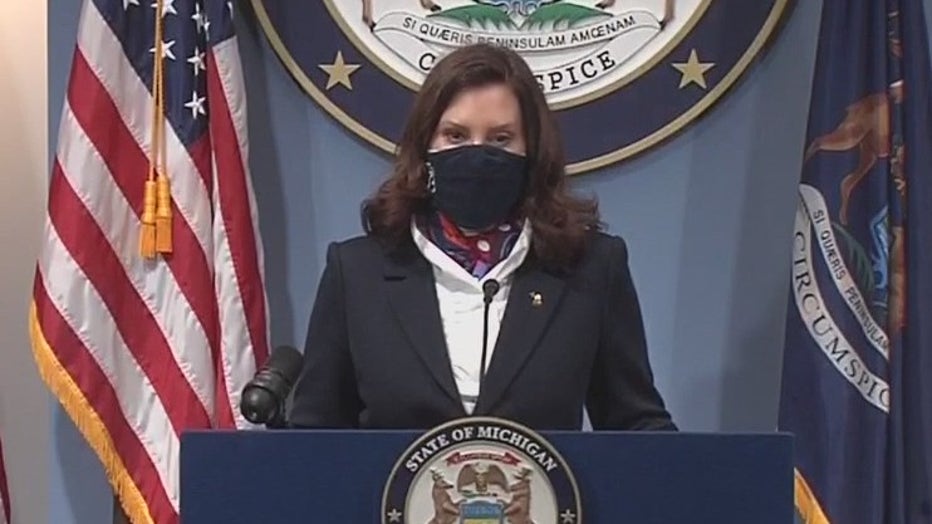 Some have wondered that, if Gordon was doing such a hotshot job, the governor would have asked him to stay instead of accepting his resignation.

His replacement, Hertel, will have to be approved by the GOP-controlled Senate. There are rumblings that Republicans might hold up the confirmation and pressure the governor to open more businesses. Whitmer said she won't play that game.

"Bartterring public health restrictions with the legislature for a nomination - for nominees - I haven't done that for ten months and I'm not going to start now," Whitmer said.

The governor said she hopes the threat of holding up the nomination was an "off the cuff comment." Unlikely as it was actually printed in a widely distributed news release by GOP Senator Jim Stamas.