Detroit police looking for ex-officer whose guns, car were used by shooting suspect

Detroit police are concerned for the safety of a former member of their ranks who is missing after a gunman was caught using guns registered to him as well as his car.

DETROIT (FOX 2) - A former Detroit police officer is missing after guns registered to him were used in two random shootings allegedly performed by his neighbor Thursday.

The shooter, a 29-year-old man, opened fire on video twice at a home off Ferguson Street near Fenkell on Detroit's west side. He was later arrested last night but the weapons he was using were registered to ex-DPD officer Stephon Hodo. The gunman was also using his car.

One of the five people inside the house along with three kids, returned fire during one of the shootings and was wounded in the hand.

Assistant Detroit Police Chief Charles Fitzgerald said they want to find Hodo for his own protection.

DPD have issued a BOL or Be On the Lookout for the 41-year-old Hodo, who left the force in 2013 after eight years on the job.

See Also: Suspect shoots up Detroit home twice, gets into shootout with man inside

On Thursday video captures a gunman unloading on a house on Detroit's west side. The guns being used have been linked to a missing ex-Detroit police officer.

"The suspect we took into custody is a neighbor with our retired police officer so we have that car with our suspect and we are still looking for our former officer," Fitzgerald said.

Friday afternoon DPD executed a search warrant at Hodo's home, where police say it looked like a struggle occurred - and next door at his neighbor’s – the shooter who police have in custody. 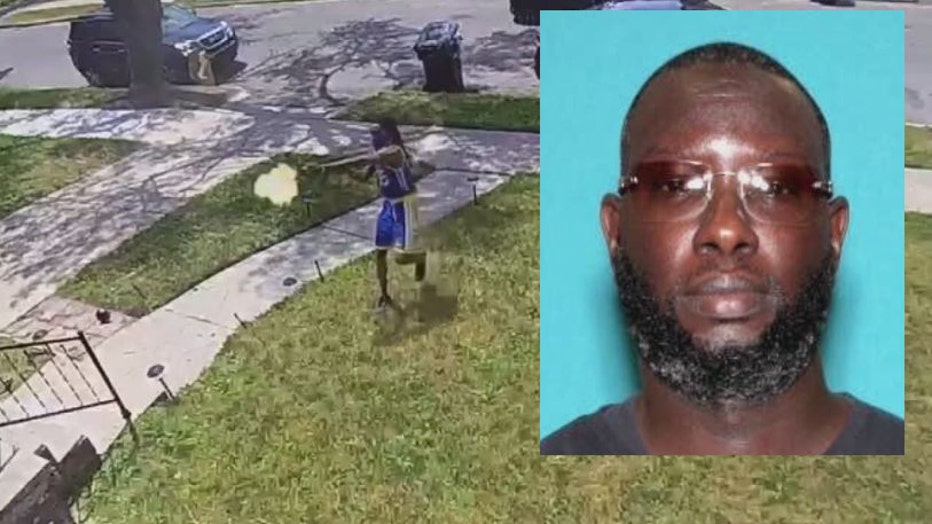 "At the house. there does appear to be a little bit of a struggle. We just want to make sure he is okay, and in case there are any other questions we have for him," said Fitzgerald. "We are looking for this individual because we don't know how he's connected to anything. Mostly for his own safety."

The shootings took place at 11 a.m. and 2 p.m. Thursday.   Cell phone video carefully taken inside through blinds, showed the shooter's bizarre behavior dancing with the weapon, and twirling down the street.

By Thursday night – a manhunt for the shooter ended in his arrest near Schaeffer and West Chicago.  Michigan State Police released video of helicopter Trooper 2 which assisted in the arrest (see tweet below).

"It's scary, like I said, this is an individual terrorizing a neighborhood and we don't know why," Fitzgerald said.

Detroit police is asking the public if anyone has information on Hodo's whereabouts to contact DPD (313) s67-4600 or Crime Stoppers at 1-800-SPEAK-UP.