THURSDAY NEWS HIT - Hillarie Galazka was driving home with her twin sons when she was rear-ended on the entrance ramp of I-96 near Davison.

Anticipating the impact, Galazka threw her body in front of her sons to block the impact.

"Her body saved them," said Jodie Kelley, who received the call of her daughter's death Monday night.

"She was my best friend she's gone now," Kelley said.

Michigan State Police is investigating the fatal crash and says the speeding driver, who fled the scene and was later located at the hospital, was driving on a suspended license, had five current suspensions and two local warrants on top of two prior convictions.

The fatal crash was another tragic collision on Southeast Michigan freeways that have claimed dozens of lives this year. Michigan State Police say the suspect driver should never have been on the road due to several suspensions and two local warrants.

"I am devastated," Kelley said. "I cannot believe that this man wasn't in prison for his entire life for all of his warrants. I can't believe he was behind the wheel doing 90 miles per hour in an SUV."

Police said around 11:25 p.m., Galazka was heading to her Lincoln Park home in her Saturn ION when a Chevrolet Traverse rear-ended her on the freeway entrance ramp.

The crash killed Galazka but left her kids with only minor injuries.

The suspect driver fled the scene on foot before traveling to a hospital. Later identified as a 25-year-old male, charges against him are still pending. Authorities say in addition to the suspensions on his license, he had two prior convictions.

Galazka's family is now preparing a funeral and has started a gofundme to pay for the expenses. 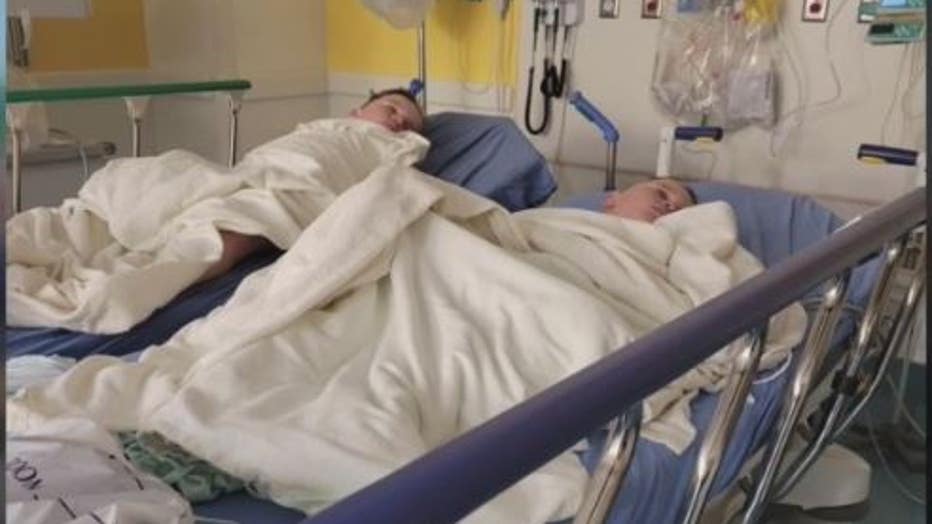 Hillarie Galazka's twins are seen here holding hands in the hospital after she gave her life to save theirs.

In addition to the two 5-year-old twins that remain hospitalized, the victim is survived by an 8-year-old, who wasn't with her at the time.

"I'm just glad the babies survived a tragedy for the family," said Hillarie's brother Jacob Galazka. "Everyone loves those kids. Everyone loves Hillarie. She is a good-hearted, strong, beautiful woman. She didn't deserve this death."

A judge has thrown out the charges against 20 activists involved in the summer protests in Detroit last year after the defendant attorney said police failed to provide due process.

"They couldn't articulate who or which officers made the arrest, couldn't provide us discovery, couldn't provide us bodycam footage on top of what we saw, to be the constitutional violations of arresting those who were just protesting," said David Cripps, a lawyer representing the activists said.

A couple of weeks ago, the Wayne County Prosecutor's Office threw out charges against more than 300 protesters after the pandemic-related laws they broke were thrown out when the governor was stripped of her authority.

Detroit Will Breathe, the activist group many protesters were apart of, filed a federal lawsuit against the city last August. The city council recently approved additional funding to fight that lawsuit, which includes a counterclaim against the group.

Judge throws out charges against Detroit protesters for summer demonstrations

Scores of demonstrators were arrested or cited during last summer's protests sparked by the killing of George Floyd. More than 300 cases have been dismissed. Detroit's law department voluntarily dropped most of them. Only a handful remain.

Michigan republicans who hold both chambers of the state legislature passed a multi-billion dollar relief plan on Wednesday without striking a deal with the governor.

The funding package arrives a billion dollars less and seeks to remove Gretchen Whitmer's authority over school closures by binding the condition to education stimulus.

The governor is sure to veto the provision that forces her to cede her authority, however, she could still approve some or all of the $3 billion in spending.

A minor traffic stop in Wyandotte turned into a much bigger case when police discovered a police badge, police gear including cuffs, and a handcuff case.

There was also meth, cocaine, a lock-pick set, a BB gun made to look like a real firearm, and thousands of dollars in stolen goods, which included lottery tickets, diabetes test strips, and purses. But none of that would have been found and more victims of potential crimes could have been reported had a car not left a CVS on Ford and Fort Street in a hurry.

"They were in such a hurry they exited the drive without yielding or stopping," said Archie Hamilton, the Wyandotte deputy police chief. "So therefore officer tried to conduct a traffic stop."

After a brief police pursuit, the driver was arrested a few blocks away. Both suspects have been arrested in the past for carjacking and weapons charges.

St. Joseph Shrine gets a makeover

One of Detroit's oldest Catholic churches that pre-dates almost every building around it is getting a full makeover beginning May 2021. The historic landmark that was first completed in 1873 is in desperate need of renovations with the growing number of cracks and peeling paint on the interior.

"Over the past century-and-a-half water has been pushing its way into the church, pushing out the mortar, then the stones shift," said Reverend Canon Michael Stein said.

A full restoration of stonework on the outside will cost $1.8 million. So far, the church has a $250,000 grant, but it's going to need double that before the money can be accessed.

"Our ancestors put their pennies together 125 years ago and it’s our job to make sure it lasts for the future," said Daniel Egan, one of the church's members.

St. Joseph Shrine has almost 150-years-old and, from a glance, it may not look like it needs repairs. If you look closer, however, you'll see the desperate need.

32-year-old woman shot on east side

Detroit police are investigating the shooting death of a woman in her 30s after her body was discovered on the city's east side late Wednesday night.

Officers were on the scene in the 20500 block of Strasburg near 8 Mile around 11 p.m. and spent hours investigating.

A suspect is also in custody, however, any other information on the case has not been released.

Police are investigating the murder of a woman in her 30's and have a suspect in custody. The body was discovered in the 20500 block of Strasburg, which is just adjacent to 8 Mile on the city's east side.

And just like that, temperatures are back down to freezing Thursday. There's also no outlook for rain or snow in the near future.

High temps have a tough time making it to 40!

House Democrats passed sweeping voting and ethics legislation Wednesday over unanimous Republican opposition, advancing to the Senate what would be the largest overhaul of the U.S. election law in at least a generation.

House Resolution 1, which touches on virtually every aspect of the electoral process, was approved on a near party-line 220-210 vote. It would restrict partisan gerrymandering of congressional districts, strike down hurdles to voting and bring transparency to a murky campaign finance system that allows wealthy donors to anonymously bankroll political causes.

The bill is a powerful counterweight to voting rights restrictions advancing in Republican-controlled statehouses across the country in the wake of Donald Trump's repeated false claims of a stolen 2020 election. Yet it faces an uncertain fate in the Democratic-controlled Senate, where it has little chance of passing without changes to procedural rules that currently allow Republicans to block it.

The stakes in the outcome are monumental, cutting to the foundational idea that one person equals one vote, and carrying with it the potential to shape election outcomes for years to come. It also offers a test of how hard President Joe Biden and his party are willing to fight for their priorities, as well as those of their voters.