The argument over whether mask mandates should be in effect at Grosse Pointe schools continued to rage during the Monday board meeting where parents leaned into representatives.

TUESDAY NEWS HIT - It must have felt like groundhog day for the board members at Grosse Pointe schools as parents descended on another Monday meeting ready to speak their mind. And they did.

"This masks-optional policy is an embarrassment to our community," said one parent wearing a mask.

Grosse Pointe schools had originally sided on the optional side of wearing a mask. Even while the Michigan health department, the CDC, and several academic studies have shown that masking in schools will cut down on the number of new infections, whether districts should wear masks is a decision they should make on their own.

But Grosse Pointe has also noted the fluidity of the situation and says it could change policy if COVID-19 numbers change.

"This is our last opportunity to rise to the level of pure districts like Birmingham, Bloomfield Hills, Ann Arbor, and Forest Hills, and rejoin them as leaders," said the first parent. "Stop passing the buck, act in accordance with your oath."

There was no shortage of opinions in Livonia last night either, where the charged topic led to some people offering their own take, despite not having any children in the district.

"I do not want my child in a mask," said one woman. "He is in third grade, he needs to see his friends' faces, see their smiles, interact, be rambunctious outside at recess, and have a great time without a mask."

COVID-19 numbers are rising in Michigan. So are hospitalizations. The early fall outlook appears to be grim without more protective measures in place, according to a health department presentation last week.

While her chief medical officer did tell reporters she had recommended masks would improve the coronavirus situation in Michigan, Gov. Gretchen Whitmer doubled down Monday that she would not be taking action on mandating masks in schools. 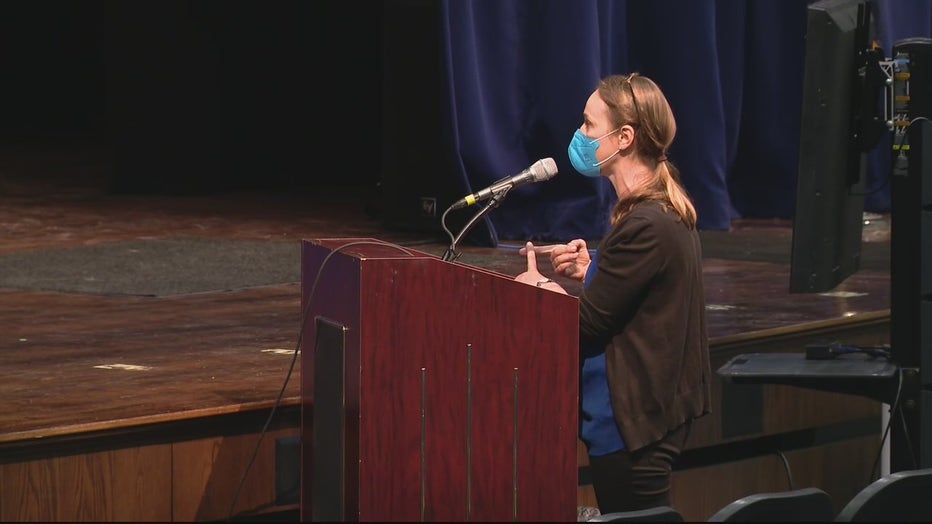 "We have the tools so that we can take action to protect ourselves and those around us," she said during a press conference in Lansing on Monday.

The Michigan hospital association is now tracking more than a thousand cases statewide.

The intentions behind the plexiglass most people likely see at their place of work were good. They could maintain a barrier between people while still enabling some kind of communication between them. But as Marwa Zaatari, an air quality experts notes, those barriers might be doing more hurt than help.

Instead of keeping people separated from diseased particles, the barriers are actually inhibiting airflow from moving the particles away from people, increasing the risk of transmission. Meanwhile, people are lulled into a false sense of security and stop wearing masks or social distancing.

In spring of 2020, companies couldn't make plastic barriers fast enough. Schools, restaurants, nail salons, and even newsrooms had them installed in hopes of protecting students, employees and customers from Covid droplets - allowing everyone to get back to business.

Moving outside air to inside helps dilute the virus, Zaatari said. It's cost-effective and using proven methods - ventilation or filtration is a better option than depending on people to wear masks, social distance and wash their hands correctly.

For January Castleman, taking a bath these days is nothing like what modern technology has enabled. "So when you get ready to take a bath, you have to do it like the pioneers, heat the water, take it in there, dump it," she says.

The old-school hygiene is only part of the struggle for the Inkster senior, who, after more than a month since her home flooded in July is still managing the ramifications of a saturated basement and damaged possessions. It was the third time her basement has flooded and knocked down her freezer, dumped out her food, while also breaking her water heater, washer, and dryer.

It's a similar story for Ilene Ferris, another Inkster senior who lives on a fixed income. She had two feet of water in her basement. For both seniors, their solution is unclear since FEMA denied Castleman's claim, and her insurance told her not to touch anything. The city of Inkster also never got back in touch with FOX 2 about the state of Ferris' home.

Two seniors in Inkster lost appliances and hot water heaters after flooding in July. They are still struggling to clean up their basements.

But as research has shown - flooding is more common in low-income housing conditions and represents an increased concern for elderly residents unable to mitigate damage to the house.

It may not feel it, but Detroit's jobs prospect is on the come-up with a new report from the University of Michigan predicting the city to fare better than other parts of Michigan over the next four years. Detroiter Juana Bullock, who's been stationed at the Michigan Central Station is seeing evidence of that firsthand.

"I've lived in Detroit the majority of my life, and there was no talk of doing construction, no talk of laying bricks or being plumbers or electricians, unfortunately," he said. "I got old enough and I don't know do you have to give  the credit too, but someone opened up the door and they ushered us in."

But it'll take some leg work to get out of the city's economic rut, as it will for most pandemic-induced meltdowns that cities have experienced the past year. After hitting a 38% unemployment rate, Detroit has dropped its jobless percentage to 9.5%. By 2026, that decline should level out at 6.9%.

The Michigan Central Station is transforming, and that's also the case for native Detroiter Juane Bullock. He's part of an apprenticeship program.

The boost will come from blue-collar jobs, with companies like Amazon, Stellantis, and the Gordie Howe Bridge serving as key economic engines for boosting employment.

The benefits of packing lunch for kids

Whether it's for the kids at school or you at work, packing your lunch has many benefits. You save money, you control the potions, and you'll eat better food and have more time to enjoy it. So why don't we do it more often?

Ways to simplify packing lunch for work and school

Okay parents do you pack lunch for the school kids - or even for yourself at work? It sounds like a lot of work but we'll give you some easy ideas to keep it healthy and tasty in Health Works.

It can add some stress to the morning, but a dietitian says you can simplify and get the job done. The new school year has finally arrived and that means it’s time for parents to start packing lunches again - which can feel like a chore. So how can you make them something that’s quick and easy but also nutritious?

"You want to make sure you’re getting all the different food groups in a lunch. so packing fruits, vegetables, protein, grains, and dairy. a lot of times we’re just packing a sandwich and chips or something like that," said Evelyn Bended, Cleveland Clinic.

When it comes to cafeteria lunches, she says schools normally have to follow certain nutritional guidelines, which is good. But it doesn’t hurt to look at the meals ahead of time, so you can tell your child what foods to pick and what to avoid. Benden is a pediatric registered dietitian who says what your child eats during the school day really does matter - especially since it can affect their energy and ability to concentrate.

The heat index is going to be unrelenting Tuesday, pushing the area into the mid-90s with little chance of rain relief. And more of the same is expected Wednesday before cool air potentially breaks through the jet stream.

Tuesday temps turn up! Near 90 this afternoon with our humidity set to soar.

Taking over on short notice for a scandal-plagued predecessor in the midst of the coronavirus pandemic, New York Gov. Kathy Hochul began her tenure Tuesday with more than enough challenges for a new administration.

She also began with an historic opportunity: Hochul is the first woman to hold one of the most prominent governorships in the U.S.

"New York as a whole has been a tough place for women to break into the highest levels, because there is very much a tight set of powerful gatekeepers," said Debbie Walsh, director of the Center for American Women and Politics at Rutgers University.