FOX 2 - After eight years in prison and almost a years-worth of rumors about a potential early release, Detroit's ex-mayor Kwame Kilpatrick has been commuted by Donald Trump in the president's last rush of early releases and pardons.

The commutation knocks about 20 years off his 28-year sentence. Kilpatrick served seven years for corruption and racketeering in office. He served as mayor of Detroit from 2001 to 2008. He was sentenced in 2013 and has since lost his appeals.

Kilpatrick's early release couldn't have come any later, with it being announced the very last day the president was in office, pardoning and commuting 147 people.

The decision to release Kilpatrick early has divided the justice and Detroit community, with both parties advocating for differing paths for him.

Family of Kwame Kilpatrick happy to see him commuted

While family of the ex-Detroit mayor wouldn't go into much right now, they did say they were happy to see Kwame Kilpatrick's sentence commuted by the president. He had served about eight of his 28 year sentence for corruption and racketeering charges.

Detroit Rep. Karen Whitsett, who had met with the president last year after she contracted COVID-19, was pleased to see the decision, claiming his sentence was too long for the crimes committed. Kilpatrick's sentence was among the severest penalties handed down for related crimes against a public official ever.

"The reason this is one of my main objectives is a 28-year sentence is just simply too long and I work very hard for anyone who has a sentence that's just far-reaching. And this is one of those scenarios," Whitsett said. "To see people incarcerated, especially Black men is extremely important to me. It's something that not only I am working on now, but plan on working on in the future to see those sentences overturned, so this was very important to me."

Detroit Mayor Mike Duggan tweeted Kilpatrick was a "person of great talent who still has much to contribute."

But U.S. Attorney Matthew Schneider was less than pleased, referring to Kilpatrick as a "notorious and unrepentant criminal."

"My position on the disgraced former Mayor of Detroit has not changed. Kwame Kilpatrick has earned every day he served in federal prison for the horrible crimes he committed against the People of Detroit," said Schneider in a statement. "He remains convicted of 24 felonies."

He added: "Kilpatrick has served only one-quarter of the sentence that was very appropriately imposed. Thankfully, under Michigan law, he cannot hold state or local public office for 20 years after his conviction."

Despite his incarceration, Kilpatrick has maintained his innocence and has appealed his case multiple times.

For family of Kilpatrick, they're just happy to see him released. Daniel Ferguson, Kilpatrick's brother in law said the family didn't have much to say at the time, but were relieved to see the news - especially with other members still serving jail time.

In a note from the White House, Trump said Kilpatrick had the support of prominent members of the Detroit community and several public officials. 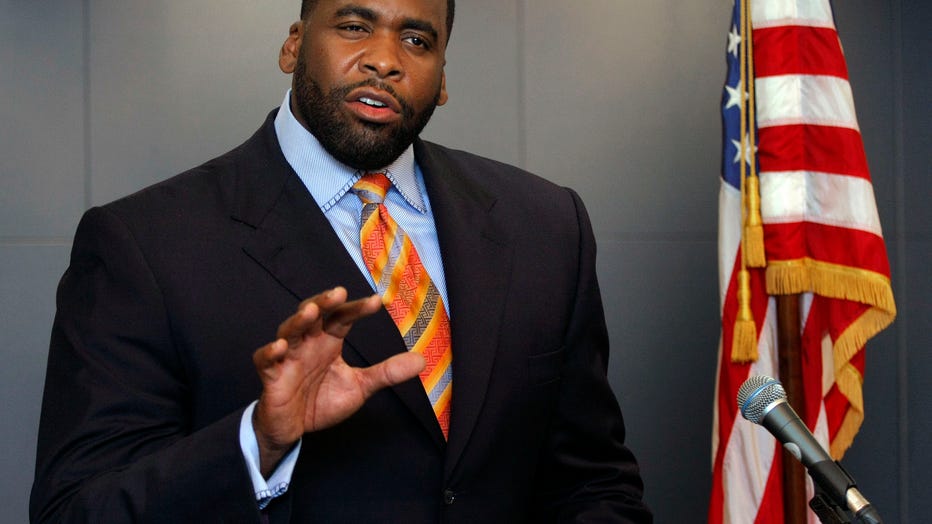 DETROIT - SEPTEMBER 4: Detroit Mayor Kwame Kilpatrick reads a statement September 4, 2008 at his office in Detroit, Michigan. Kilpatrick has accepted a deal in the text messaging scandal case, which includes his pleading guilty to three felonies and

"During his incarceration, Mr. Kilpatrick has taught public speaking classes and has led Bible Study groups with his fellow inmates."

Kilpatrick remains a popular figure among some in Detroit and has inspired the FreeKwameProject.

Currently held in a federal prison in Louisiana, when he's released Kilpatrick will have other issues to face - mainly the mountain of debt he accrued as a result of his activities while in office.