For Taylor who has had his own set of challenges, to know someone went out of their way, especially a police officer to get him a bike so he could still get to work, meant the world to him.

FERNDALE, Mich. - Tyreese Taylor used his bike to get everywhere and his trip to his workplace in Ferndale in early May was supposed to be no different.

It was the last time he'd see his primary mode of transportation after someone stole it from the Taco Bell parking lot where he worked.

But less than two weeks later, he had a brand new bike delivered to him thanks to the Ferndale Police Department.

"I was upset. Mad," he remembers after someone took off on his bike down Woodward. "I was trying to not let it get to me."

Taylor had ridden the bike for over a year. He had arrived to work early and was waiting for his manager when someone offered him some money to use his phone. Taylor told him to ask his manager.

The suspect instead hopped on his bike and sped away.

About half an hour later, Ferndale Police responded to a report about the stolen bike. It was Officer Christopher Wiacek's first call that Saturday.

"When I arrived, I met the victim, Tyreese, and as I spoke to him, it became pretty clear his bike was important to him," Wiacek said. "It was his only mode of transportation to get to work and anywhere else." 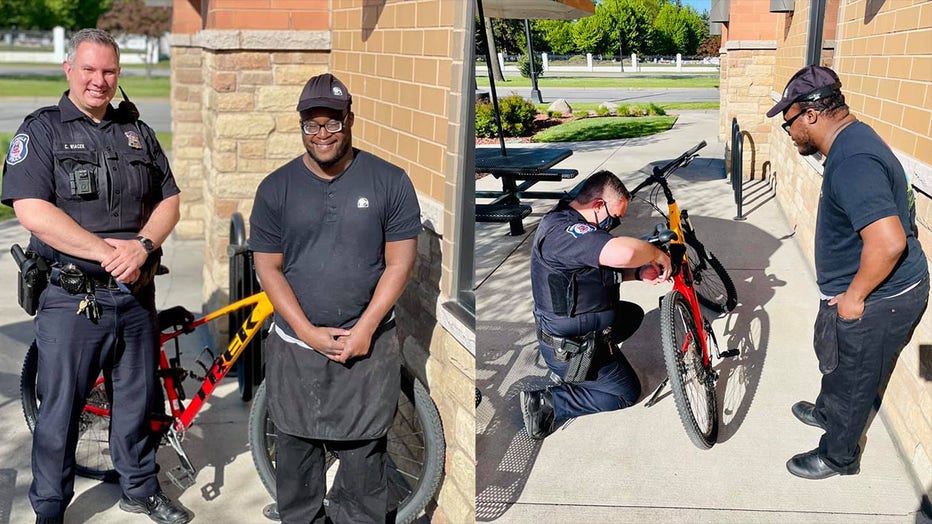 The suspect was long gone by the time the details had been sorted out. And the footage of him was too grainy to make out any significant clues about his identity besides "A man wearing dark clothes," as Wiacek described it.

But that didn't mean help couldn't arrive in a different fashion. If the police couldn't return the stolen bike, maybe they could get Taylor a new one.

The police department didn't have any leftover bikes in storage that could be used. Instead, Wiacek went to Motorcity Pawn Brokers to see if they had any cheap bikes they'd be willing to sell.

But the goodwill didn't stop there - the manager and owner of the business decided on donating one of their own to the cause. After nine days, the new bike arrived. Wiacek then took it to The Trek Bicycle Store in Royal Oak where they serviced it for free.

"It was just one person being nice to another person," Wiacek said, who has been with the Ferndale Police Department for six years. He's seen his fair share of charity over the years, but he admits this is the first time he found himself looking for a replacement bike.

"You find yourself in a position to help somebody whether it's with directions or just listening to what they say or finding a bike for somebody," he said. "As far as a larger concerted effort of ‘hey let’s make this guy's day with a new bike?" That's a first for me."

It wasn't something Taylor was expecting either.

"It was awesome," he said. "I was surprised - I thought they were joking at first."