DETROIT (FOX 2) - No one was hurt in a wild Downriver chase and standoff something that police say could very well have happened. The suspect is now behind bars after his confrontation with police ended in southwest Detroit.

Police bodycam footage shows how it started. The suspect fled from Wyandotte police early Monday, leading cops on a pursuit that stretched into Lincoln Park, Ecorse, and into Detroit.

Detroit and Wyandotte police team up to track down and arrest suspect after chase, barricaded situation

No one was hurt in a wild Downriver chase and standoff something that police say could very well have happened. The suspect is now behind bars after his confrontation with police ended in southwest Detroit.

Wyandotte police say they spotted the man while responding to a report of a shoplifting in progress at a CVS a little after midnight.

"When our officers approached this man, he fled on foot and jumped in a vehicle and took off from the officers," said Deputy Chief Archie Hamilton, Wyandotte police. "And the officers began pursuing him at high speeds."

Police say the suspect reached speeds of 90 miles an hour at points throughout the chase. He ended up getting stuck in the snow and trapped by officers in someone’s front yard.

He revved his engine trying to break free from the snow as an officer approached him.

"Thankfully no one was hurt, but the suspect did ram one of our police cars multiple times in his escape," Hamilton said. "He finally did free himself from that situation only to crash and bail on foot. officers gave chase but they lost him."

Wyandotte investigators got word hours later the man was living in an abandoned house in Detroit. They did not find him there -but Detroit police assisting in the search spotted him running through the neighborhood eventually holing up in this vacant house on the 2600 block of Liddesdale.

"Once he was in the house, he announced he was armed with a handgun and he was going to kill himself if officers tried to take him into custody," said Detroit police Cmdr. Darin Szilagy. 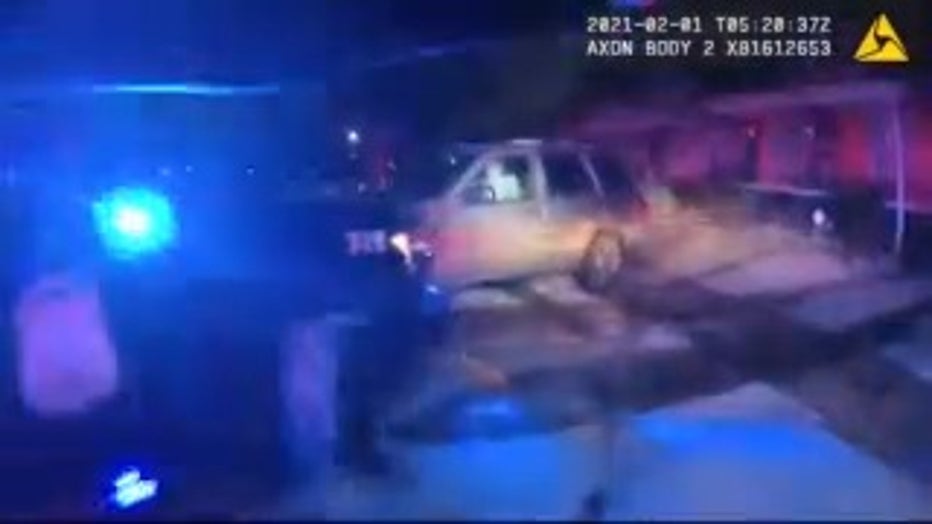 Detroit police were able to negotiate a peaceful surrender. Investigators say the man, now in custody, absconded from parole and may be responsible for a number of thefts in the Downriver area.

"Make no mistake about it, this man is a real threat to the community," Hamilton said. "And the work the Wyandotte police and Detroit police officers did today, made our community a safer place. they did an outstanding job."

It turns out that the suspect was not armed, police say he could face a judge as early as tomorrow.

Charges he will be facing include fleeing and eluding police, three counts of felonious assault on an officer, that’s for ramming those police cruisers with his car -and potentially more charges if investigators find he is behind a string of thefts.