LANSING, Mich. - A 22-year-old man from Lansing struck the rear-end of a Michigan State Police car while his Tesla was on autopilot, police said Wednesday morning. 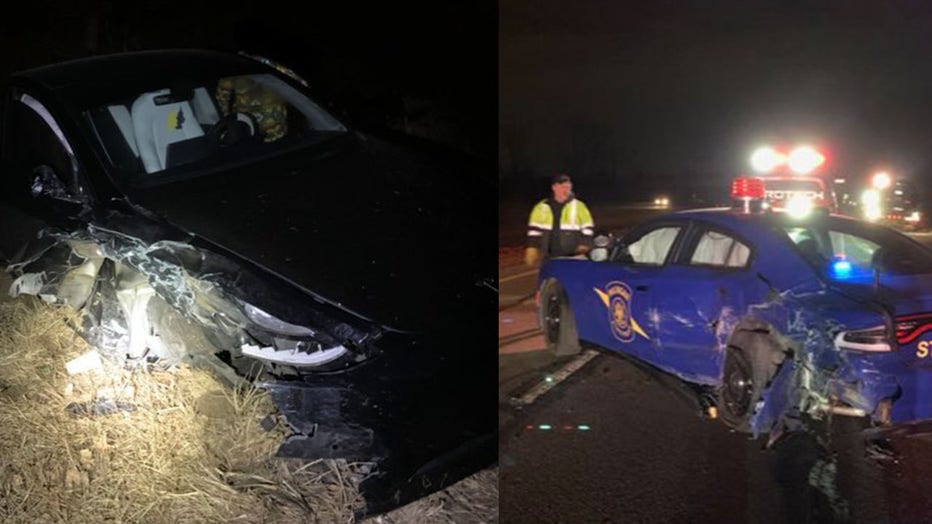 MSP said that a state trooper had pulled off to the shoulder to investigate a traffic crash after a car struck a deer on I-96 near Waverly Road in Eaton County. That was around 1 a.m. Wednesday morning

With emergency lights activated and an officer investigating the crash, a Tesla traveling on autopilot slammed into the right rear end of the state police car.

Neither the trooper nor the driver was injured in the crash. The driver of the Tesla was issued a citation for failure to move over.

Last week, two people were injured after the Tesla they were in crashed into the side of a tractor-trailer on Fort Street in Detroit. Both were taken to the hospital in critical condition as a result.

The crash prompted the National Highway Traffic Safety Administration to launch a probe into the electric vehicle's auto-pilot function after reporting multiple other cases of Teslas crashing into semi-trucks.

According to police, the vehicle involved in last week's crash in southwest Detroit was likely not on autopilot. Detroit police said Tuesday that "all the indications that we have at this point is that it was not in autopilot mode," said Deputy Chief David LeValley, "that the driver was in control of the vehicle at the time of the crash."

RELATED: Detroit police believe Tesla that got lodged under semi was not on autopilot

LeValley said that surveillance footage showed the car performing sharp maneuvers before the car got lodged under the truck. Police have yet to look at the black box to determine that was the case.

Individuals from the NHTSA believe the incident looked similar to two other crashes that happened in Florida when Teslas drove underneath trucks while using partially-automated driving software.