Man kicks out police car window after arrest in Troy

A man kicked out a police car window in Troy after accusing officers of hitting his wife, police said.

TROY, Mich. (FOX 2) - Police in Troy responded to a call of people being too loud and found a long list of crimes including identity theft, drug use, alleged kidnapping, mail theft, and the kicking out of a police car's window.

When police arrived at Hawthorn Suites on Livernois Road in Troy around 6:30 a.m. on May 20, a woman said she was "awoken from a dead sleep" and met police in the hotel. The 19-year-old woman told police she was at the hotel with her brother and her cousin, Justin Vita-Purnell, but she wanted them both removed from the hotel room for being too loud.

As police were investigating, they learned the woman had an extradition warrant out of Miami Dade County in Florida for narcotics. She has had charges including loitering, drug paraphernalia offenses, and other narcotics possession charges.

Her cousin, Vita-Purnell, had a warrant block on his license from Ohio. The state of Ohio told Troy police that he would have a bench warrant for failure to show for an arraignment for car theft but the charges were not in the system.

The 19-year-old was taken into custody while her cousin was allowed to return to the room. Soon after, police said Vita-Purnell returned with another man who said his name was Rocky Hernandez, Garcia's wife, who wanted to know what was happening. Hernandez also had warrants for his arrest out of Florida for narcotics as well and was arrested. He also had charges for battery, domestic violence, multiple offenses of cocaine possession, multiple offenses of grand theft larceny, multiple offenses of burglary, multiple offenses of resist officer, flee and elude, robbery, firearm offenses, and felony firearm from October 2020 in Michigan.

The hotel staff said the 19-year-old was the only one registered to stay in the room and anyone else would need to be evicted. When police went inside to remove anyone else, they didn't find anyone but they said there were meth pipes in plain view.

Vita-Purnell was then brought back to the room to gather his belongings, which police searched before he left with them because of the criminal histories of the woman and Hernandez. When they did, police said he told them there were no weapons but they found a stiletto knife and he was arrested. Police then searched the rest of the bags and found several credit cards and debit cards, multiple identifications of other people, and more details that didn't belong to Vita-Purnell

While police were searching the hotel room, a Troy officer said Hernandez had kicked out the window of a police car. Both Hernandez and the woman were taken to the Troy Police lockup.

The man was irate because he said Troy police had hit his wife. You can watch the video below, which has been edited for profanity.

A man with a warrant to be extradited to Miami-Dade County kicked out the window of a Troy police car after he accused police of hitting his wife.

Meanwhile, police began searching bags and found driver's licenses, credit cards, financial paperwork, checks, and more.
Police then worked to contact the owners of the property found in the bags. One of the victims had moved from Florida to Hawaii and said that he gave his ID card to a friend to remember him by. That friend told police that he had that card in his wallet, which was stolen in January of this year.

The victim said his wallet had multiple credit and debit cards plus his social security card and, in the time since it was stolen, his life was "turned upside down." He told police his identity was "completely stolen" and he lost his job, unemployment benefits, and struggled to make a living.

The owner of another card was discovered as the subject of a possible kidnapping filed earlier this month in Troy. That woman ran to Powerhouse Gym on Livernois and told staff she was kidnapped from Florida where she was taken to Ohio and eventually Michigan.

The victim told gym employees she had been held at Hawthorn Suites. By the time Troy Police arrived at Powerhouse, she had left in a Buick. Employees said she had a black eye and scratches on her chest.

Detroit Police eventually found the woman but she said she didn't need assistance.

Of the checks found in the bags of the hotel room, one of the victims said she did, in fact, write checks intended for her child's college fund and mailed them to an address on Livernois. However, she said she had never heard of Vita-Purnell and that he doesn't have permission to have the checks.

Another victim, who lived near the hotel, also had checks found in the hotel room. She said she did not write any checks to anyone named Justin Vita-Purnell and had never heard of him. She said she believed someone had broken into her car or house and would check when she returned home.

She ultimately did and didn't find anything missing. The account number on the checks with her name made out to Vita-Purnell didn't match her checking account number, leading her to believe that she may have stolen her identity and created the account himself.

Two businesses on Livernois, both of which were investment companies and just feet away from the hotel, were contacted and one said they had customers call over the past four months to report mail that was sent but never received by the company. That same company said they believed it was related to the pandemic and contacted the post office to help find the items.

Representatives from both businesses confirmed that the items recovered belonged to them.

Police then went to interview Vita-Purnell, who waives his rights.

He then started talking to police that the possible kidnapping allegations and initially said he didn't know the women. When police asked why he had her driver's license, he said he had known her for two years.

He also said that he came up to Michigan on May 11 and met with the victim at the Hawthorn Suites the next day. He said she did not have a black eye or any injuries and didn't see her for a few days. The next time he did, she had a black eye. He said he didn't ask her about it.

That night, he said they watched movies and then she apparently left her license on the counter. He said she then called him and asked him to bring it back to her when he went back to Florida.

Vita-Purnell told police that she has made kidnapping claims before in Akron, Ohio and that she is "psychotic". He also said she's hurt herself intentionally while driving. Police asked why he's still friends with her if she keeps making kidnapping claims and hurts herself.

"I like to give people a second chance," he reportedly told police.

As for the checks, he told police it was from a friend's mom after h did some repairs for her. They were for $460 and $200 and he said it was because he helped fix a valve cover on a car and a sink repair.

The checks were made out to him but were from an address just feet away from Hawthorn. The name of the woman he said he helped did not match the name on the checks. Police confronted him with that information.

"Well I didn't look at the checks closely when she wrote them," he told police.

He also couldn't explain how other checks or mail were in his bag.

He told police the credit and debit cards all belonged to him except that that was his friend, 'Joe'. He said he didn't know Joe's last name because he never asked it and said he lent him a jacket. When 'Joe' returned it, the credit card was in the pocket. He told the police he tried to call him once but his phone was off.

Police then interviewed the 19-year-old woman, who also waived her Miranda rights. She said she moved to Michigan between 8 months to a year ago and said her husband, Hernandez, was arrested so she returned to Florida. About a month or two ago, when he was released, she returned to Michigan and they have been staying at the hotel.

One day, she said she got a call from her brother that he was on his way to see her. Her brother - who she called Joseph, then John, and then Joseph again - and her did not get along and she wasn't happy he was coming to visit.

She told police Joseph brought his girlfriend - the alleged kidnapping victim - and Vita-Purnell with him. He said they stayed for a few hours and then went back to Ohio. A few days later, they call came back together but she said she never actually saw Joseph's girlfriend but was told she was with them.

She said Hernandez and Joseph smoke meth and weed and that the meth pipes all belonged to them. She did not provide information about where it came from.

Troy Police are seeking charges against all three involved. Hernandez faces destruction of police property and charges in Florida.

The woman was issued a citation for hindering and obstructing police. Florida law enforcement said they no longer wanted to extradite her and she was released. 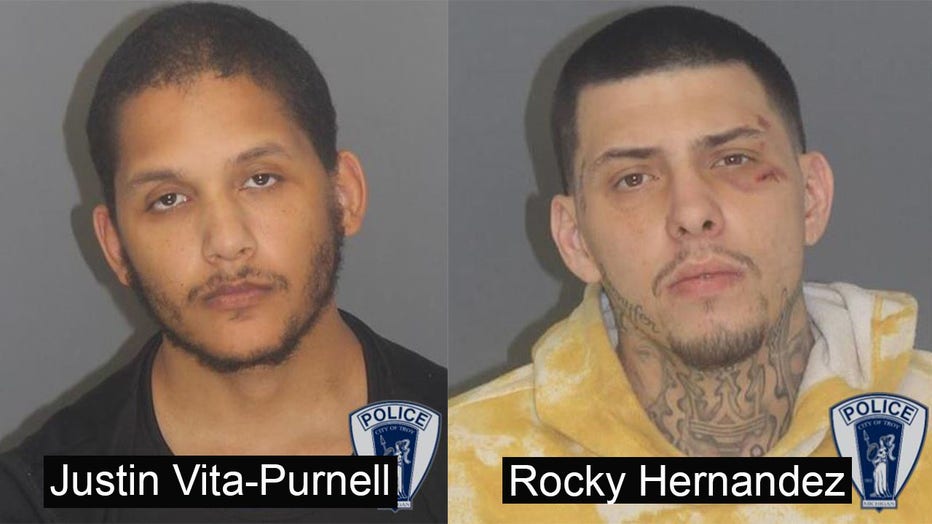 Troy Police arrested two men after a bizarre call led them to a long line of charges, including identity theft, meth use, and the smashing of a police car window.