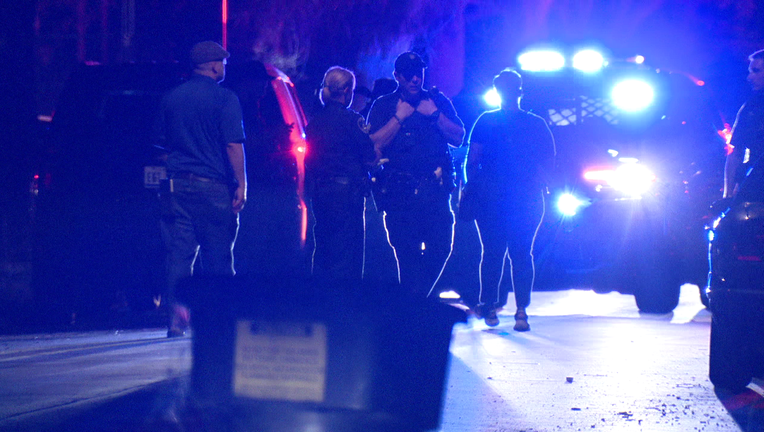 Police gather near a home on Andover Street after gunfire erupted, injuring 6 and fatally wounding another.

DETROIT (FOX 2) - Detroit police continue to manage gun violence in the city after two mass shootings occurred within 12 hours of each other this weekend.

Two people were killed at a known drug house on Saratoga Street Saturday morning, while another died on Andover Street later in the evening. Nine people were also injured amid the gunfire.

"This is another senseless shooting," Detroit Police Commander Jacqueline Pritchett said of the second incident. "The violence in this city is ridiculous. We can do better."

Gun violence has wrangled the city this summer as well as the police department, which recently lost an officer when a shooter opened fire on deputies responding to reports of shots fired.

Several more calls about gunfire came in this weekend, including two that involved several victims.

Detroit police received reports of shots being fired in the 13000 block of Saratoga Street around 10:50 a.m. Saturday.

Once on scene, police discovered one person outside who'd been shot and heard people screaming inside the home. When they entered the home, police found four additional people with gunshot wounds.

One person was killed in the shooting, two people were critically injured, and 2 others are in temporary serious condition. One of the victims later succumbed to their injuries.

The ages of the victims range from 35 to 76 years old. They were all shot inside the home; one of them made it outside and was found by police.

5 shot, 1 killed after mass shooting on Detroit's east side

The ages of the victims range from 35 to 76 years old. They were all shot inside the home; one of them made it outside and was found by police.

Gunfire during ‘A Game of Chance’ injures 6, kills 1

Detroit police responded to a home on Andover Street around 10:20 p.m. Saturday after gunfire erupted while several people were playing a game.

In total, six people were shot and another died of their injuries.

Police said they don't know if there were one or more suspects as the victims didn't get the chance to see who the shooter was.

The shooter struck 7 people with gunfire; injuring 6 and killing 1.

All the victims were adult men in their 30's and 40's. Investigators are unsure if there were one or more guns used during the shooting.