One fire was on Canfield and St Clair, another was on Lillbridge near Mack - both were about a mile apart.

House fires a mile apart on Canfield and Lillibridge have managed to spread to separate homes in what's been a busy morning for emergency responders in Detroit. Damage to the surrounding area impacted both cars and roads.

Images from both scenes show massive blazes towering over the residences, requiring dozens of firefighters at each address.

At Canfield and St. Clair, a fire at one house started at 4 a.m. before it caught onto four homes, leaving several people homeless.

The original home that caught fire looked like a shell of its former self. 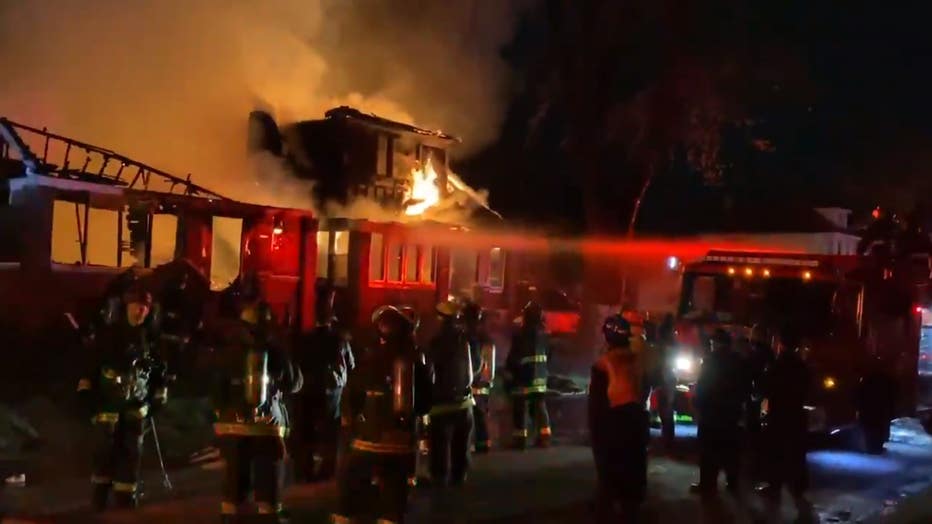 Some of the homes that burned down were vacant. So far, there's been no report of injuries, however, the Detroit Fire Department hasn't offered a comment.

Early Thursday morning, police received a report that an argument between a couple had escalated to the point the dad fired shots, striking the car being driven by the mother.

A 7-year-old girl in the back of the car was also struck. She was taken by her mom to a local hospital where she is in stable condition.

Detroit police said the dad barricaded himself in his home, at which point police established a perimeter.

He surrendered a short time later. The incident occurred at 9636 Appoline, near W Chicago.

America's latest police shooting of a Black man has reinvigorated debate about the role of police in communities. Michigan Rep. Rashida Tlaib made her opinion known Monday when she called for "no more policing, incarceration, and militarization. It can't be reformed."

Detroit Police Chief James Craig has criticized rhetoric that paints police with a broad brush, arguing it has led to increased violence against law enforcement. Yesterday, he called Tlaib's "knee-jerk response" "reckless" and said it "does nothing to heal our country."

Tlaib clarified her comments Wednesday when she said money that goes to the police department should be reinvested to tackle poverty, education inequity, and increased job opportunities - all root causes of crime.

A criminal justice professor at Wayne State said the mutually exclusive decision making of police or no police makes having a discussion about their role a challenge. "I think that's a scary proposition not just for the police, but also for the community when they hear that, so you're going to take police officers off the street," said Dr. Charles Klahm.

Tlaib clears up policing tweet with new string of comments

For 10 of the 47 years that Maxine Jones has lived at her home on Seymour Street, she's battled with the Detroit Land Bank to get the blighted property next to her torn down. So far, she's had no success.

FOX 2 did a story on the home five years ago. At the time, the city said the home wasn't part of the demolition program but had boarded it up anyway. Records then show it was sold for $1,000.

"The Land Bank is just selling these places to any damn body that they can in order to get the money and get it off the demolition list, knowing full well that this person cannot afford to rehab this house," Jones said. She also managed to contact the buyer of the home, who seemed naive to the blight of the property she purchased.

So far, a third and final warning has been issued to the owner to clean up the house, which is part of the agreement a purchaser makes when the land bank sells them a home. So far, 5,300 homes have been completely renovated since 2014.

For about a decade, Maxine Jones has been fighting with the city of Detroit to get a blighted house next to her torn down.

Michigan's governor has opted to expand treatment and vaccinations instead of lockdown measures to help combat the country's worst coronavirus surge. During a press conference Wednesday, Whitmer announced plans to expand therapeutic access for Monoclonal antibodies for people with COVID-19.

"These antibody treatments could keep you out of the hospital and save your life, and my administration and I will continue working with the federal government to make sure we are using all the tools in our toolbox to keep you and your family safe and get back to normal sooner," she said.

The mAb treatment uses laboratory-developed molecules to enhance the immune system and help it fight off viruses easier. Clinical trials have shown the therapy treatment can help patients who are at high risk for progressing severe symptoms or hospitalization.

This is the same drug that was given to former President Donald Trump when he was infected with COVID-19. More than 6,600 Michigan residents have been given the treatment, with 65% of them feeling better within two days and less than 5% requiring hospitalization.

As Michigan's COVID-19 cases stay the highest in the nation, Gov. Gretchen Whitmer is touting therapeutics that have been proven to work for high-risk patients.

If you can believe it, snowflakes (yes, really) fell over Metro Detroit Thursday morning as part of the rain that moved through the region. Precipitation should stop falling around 11 a.m. and temperatures are expected to hit 49 degrees today.

Thursday morning flakes fly! It will be a cold day for SE Michigan.

A House panel advanced a decades-long effort to pay reparations to the descendants of slaves by approving legislation Wednesday that would create a commission to study the issue.

It’s the first time the House Judiciary Committee has acted on the legislation. Still, prospects for final passage remain poor in such a closely divided Congress. The vote to advance the measure to the full House passed 25-17 after a lengthy and often passionate debate that stretched late into the night.

The legislation would establish a commission to examine slavery and discrimination in the United States from 1619 to the present. The commission would then recommend ways to educate Americans about its findings and appropriate remedies, including how the government would offer a formal apology and what form of compensation should be awarded.