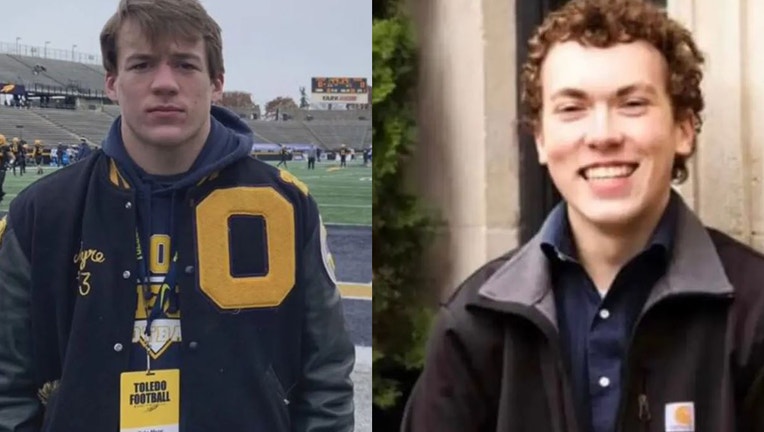 Johnson represents the family of Myre and Shilling and gave an update on Thursday about what he has learned through sworn depositions from leaders from the school.

Depositions are sworn testimony with a court reporter and witnesses are questioned under oath. Johnson said he's learned that teachers and counselors at the school should have spotted warning signs for months before that terrible day.

Ethan Crumbley is accused of shooting and killing four students and attorney Ven Johnson says the school missed several very obvious signs that date back to the start of the 2021 school year.

"From literally the beginning of school, Ethan Crumbley was evidencing signs of being a highly troubled individual, to say the least," Johnson said.

According to a sworn deposition, the first warning signs happened at the beginning of the school year when Crumbley drew a picture of a person who Johnson said was supposed to be him. He said the note card originally had the person holding a gun but had been removed. According to the deposition, the teacher said the gun was in the photo originally.

Next to the person was another drawing that Johnson said could be a building but the teacher said it could also be a magazine with a bullet at the top. However, the teacher said she hadn't seen the drawing, which was done in August, until Monday, Nov. 29, the day before the shooting. 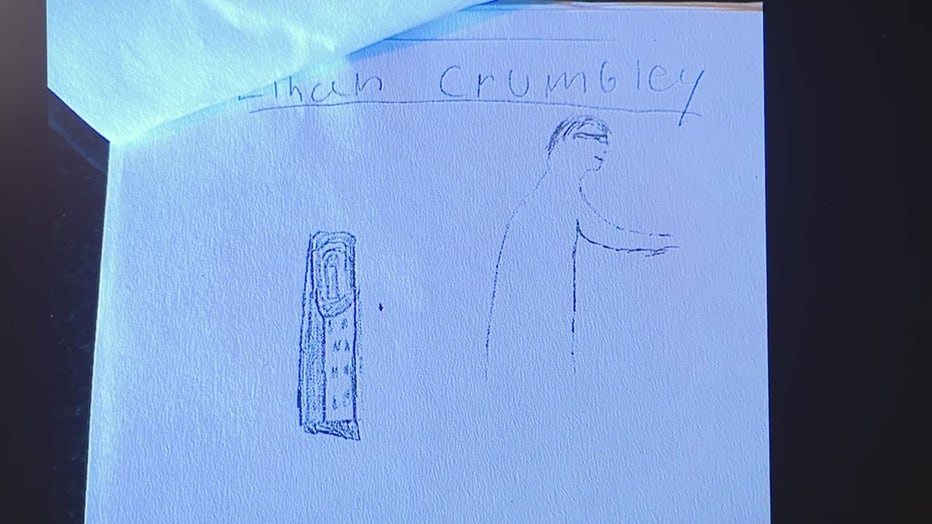 Another warning sign, Crumbley said, came on September 8 when Spanish teacher Diana McConnell emailed counselor Shawn Hopkins to speak with Crumbley after an assignment was turned in where he was asked to turn in an autobiographical poem.

"Could you please touch base with Ethan Crumbley? In his autobiographical poem, he says that he feels terrible and his family is a mistake," the email read.

Hopkins testified that he didn't talk to Ethan, Johnson said, but did speak with McConnell who said she was no longer concerned based on ‘further reflection’. She said she believed Crumbley was talking a homework assignment and not something about his life.

McConnell shared the mail to the Oakland County Sheriff's Department after the shooting and said Hopkins had claimed to have spoken with Crumbley.

Two months later, on Nov. 10, McConnell emailed Hopkins again: "Ethan Crumbley is having a rough time right now, he might need to speak with you."

Hopkins testified that day that he walked down to the classroom where Crumbley was and pulled him out of class to offer him an opportunity to speak with him. Crumbley said ‘ok’.

"There should have been more follow-up. Hopkins did virtually nothing," Hopkins said.

On Monday, Nov. 29, Johnson said an email was sent from English teacher Jacquelyn Kubina to Nicholas Ejak, dean of students, and another faculty member in the counseling offices, Pam Fine.

Kubina emailed and said that Crumbley was spotted looking at ammunition on his cell phone during class.

"I had a student during first hour today, Ethan Crumbley, who was on his phone looking at different bullets at the end of the first hour today as I was walking around the room and passing out their essays," the email read. "Now that he's on my radar, I'm noticing that some of his previous work he's completed from earlier in the year leans a bit toward the violent side."

The teacher said Crumbley didn't try to hide his phone and Johnson said this was an obvious call for help.

In depositions taken by Ven Johnson who is suing employees of the Oxford School District, he said new evidence revealed that the alleged shooter displayed clear signs of violent tendencies months before Nov. 30.

"As class left, she was clearly concerned so she went back to his past work," Johnson said. "In his previous classwork, he completed what she called an ELA survey (English Language Arts survey) on August 26, 2021."

In that survey, Kubina testified there were major concerns that leaned ‘toward the violent side’: Crumbley listed his favorite book as ‘Resistance and Making Bombs for Hitler’ and that his favorite shows were ‘Dexter’ and ‘Breaking Bad’.

On Nov. 29, an email was sent to Hopkins, Fine, and Ejak that prompted a meeting with Crumbley but it was concluded that Crumbley was 'sorry, realized he screwed up and couldn't look at bullets at the school', Johnson said.

"Had someone truly investigated, they would have talked to classmates to see what they saw him looking at," Johnson said.

One of those classmates would have told them what they know now.

"One classmate told the Oakland County Sheriff's Office that on the 25th of November, Ethan told him if I ever tell you not to come to school sometime, don't," Johnson said.

That same student said Crumbley also showed him a single bullet while in the hallway of the school.

Johnson said Kubina tried to notify counselors and Ejak of the problem but nothing was done.

"Imagine anyone doing their job, this info would have been known on Monday - on the 29th. Ms. Kubina never heard from Hopkins, Ejak, or Fine. No way of knowing if they met with Ethan or not," Johnson said.

After school that day, she sent another email, this one containing that note card drawing from before. She said she does the note cards assignment and keeps them for activities throughout the school year. While looking at Crumbleys, Kubina said she could see the marks of an erased gun in the person's hand.

"She sent this to Fine and Hopkins thinking they would see this and join her in her concern. Yet, Mr. Hopkins testified when they look at that, no one told them there was a gun, he couldn't see it in picture, and the thing to the left didn't look like a magazine. This pic sent to them out of concern was completely blown off by people who had met Ethan that day," Johnson said.

Ejak testified he saw the picture on Tuesday, Nov. 30 but didn't think anything of it.

Also that morning, special education teacher Allison Karpinski emailed Hopkins and Fine, acknowledging she knew about Kubina's email the day before and said she had concerns about something he was watching on his phone.

"Today he's watching videos on his phone of a guy gunning down people. It looks like a movie scene and not security footage or a real event, but definitely concerning when taking into account all of his behaviors," the email said.

Hopkins testified he never saw the email until half an hour later. Fine testified that she got the email and understood that Hopkins was ‘on it’.

Math teacher Becky Morgan also emailed Hopkins that morning after discovering a picture of a person with bullet wounds and blood coming out of the wounds. But Hopkins said he didn't see that.

"According to Hopkins, the only thing out of that that is concerning was 'the thoughts won't stop. Help me'," Johnson said.

Hopkins pulled Crumbley from Morgan's class and spoke with him for about 30 or 45 minutes. His parents were also called and, when they arrived, Crumbley said he was concerned about missing chemistry class but had left his backpack behind in Morgan's class.

"Hopkins went down and got backpack: Morgan picked it up and made comment out loud about how heavy the backpack was. Ejak gave it back to Crumbley and neither one of them even thought for a second to search the backpack," Johnson said.

Had they searched, they would have found the gun, magazines, and Crumbley's journal, Johnson said. He said that the school will deny that he can look in backpacks, which he called a ‘pack of lies’.

"They're searched all the time for cigarettes, vapes, dope, you name it," Johnson said. "They said they didn't have reasonable cause to suspect, like they're a police officer. They never asked."

Johnson then turned his focus on neglect, which the school should have noticed. He said that when James and Jennifer Crumbley came into the meeting, they didn't greet their son and refused to take him out of school that morning.

"If they admit it was neglectful, they violate the Child Protective Act," Johnson said.

Educators are sworn to report neglect to Child Protective Services but the school has said they didn't believe the Crumbley parents were neglectful.

The school gave the Crumbleys a handout with therapists and organizations to assist in mental health and made it clear that Ethan needed help immediately.

"They never called an Oakland County Sheriff's deputy to the school. They never called the SRO (School Resource Officer). Hopkins said they if didn't get Ethan help within 48 hours, then he would have reported them to CPS," Johnson said.

Instead, he went back to class around 11 a.m. Two hours later, four children were dead.

"To hear adults, teachers, school administrators be sworn to tell the truth and tell me that these things are not concerning - just ‘normal behavior for kids from Oxford’ - nothing is concerning about a dude drawn with bullet holes...I can't think of anything more grotesque and concerning," Johnson said. "The only that would have stopped Ethan Crumbley is if he would have handed them the manifest and said 'why don't you read what I'm going to do today.'"

Johnson said there were obvious signs before the tragic shooting but people weren't paying attention.

"There were stop signs everywhere on Monday the 29th and Tuesday the 30th that were absolutely ignored," Johnson said.

He said more depositions are coming and expects to give another update in October with more details.

Myre's father, Buck, on Thursday too and blamed the district for failing to properly investigate the events leading up to the shooting. Myre said the lack of transparency on the school's part speaks to its indifference toward the victims.

"As we dig deeper into this, some questions I have is about culture at Oxford Community Schools. Why did the teachers not report this to CPS?" he asked. "Is there something in the culture there telling them not to? I don't know, but obviously the culture is not good there because there is signs, signs, everywhere there's signs."

The Oxford School District declined multiple offers by the state Attorney General to conduct an investigation into the shooting, instead going with a third party firm to look into the events leading up to Nov. 30.