EASTPOINTE, Mich. (FOX 2) - A vigil was held Sunday night outside the Last Call Bar for the victims of a shooting over the weekend that left several people hospitalized, including a 34-year-old man in critical condition.

Friends of Jared Glenn, currently battling for his life in the hospital, gathered at Last Car Bar to pray for Glenn and the five other people shot Friday night. They say Glenn is showing signs of improvement.

On Friday, an argument broke out inside the Eastpointe bar and pushed the crowd into the parking lot. Witnesses say a customer kicked out of the bar earlier in the night allegedly started firing, hitting 6 people -- critically wounding Jared Glenn.

"It's pure evil. There is no reason to pull out a gun if you're mad at somebody," said friend Stephanie Kennedy.

On Friday, an argument broke out inside the Eastpointe bar and pushed the crowd into the parking lot. Witnesses say a customer kicked out of the bar earlier in the night allegedly started firing, hitting 6 people -- critically wounding Glenn.

"Basically Jared ran out when he heard his friend was on the ground and he ran out to help her," Maria Burns said.

For that, Jared was shot in the face. He's on life support, showing some signs of improvement.

"Let's hope he pulls through this and that he's gonna be OK because we need him in our life," said Deana Wolgist.

Teary eyes and worried hearts met back at the scene Sunday night to pray.

"He is just so outgoing, always happy under every circumstance," Kennedy said.

"To me, when I want to describe him, he's a ray of sunshine," Burns said.

Self-described second mom Maria Burns says Glenn has Williams Syndrome, a developmental issue with physical and cognitive effects. It makes him the happy-go-lucky guy he is. 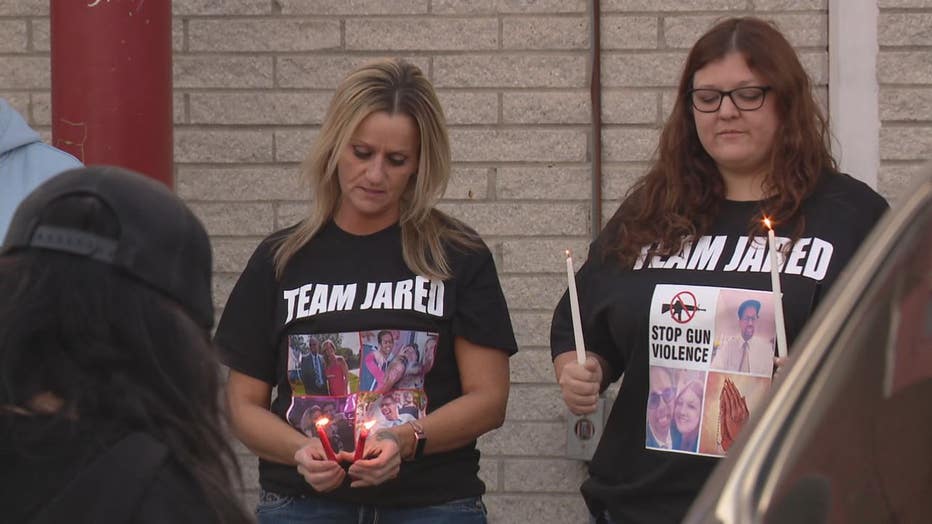 "He worked at a grocery store in the community and people from there just know him and love him just from bagging their groceries," said Wolgist.

Eastpointe police arrested the alleged shooter within 24 hours. They're keeping details on who this man is, close to the vest. These friends have no words for that shooter, only kind ones for Jared.

"You could be having the worst day in the world and Jared would make your day better by the time you see him," Wolgist said.

The other five victims were hospitalized and all expected to be OK at last check with police -- some were even at the gathering for Glenn.