Warren Police are investigating allegedly racist comments made by an officer on Facebook. He's on administrative leave and the woman he sent the comments to wants him fired.

WARREN, Mich. (FOX 2) - A Warren Police Officer has been placed on administrative leave after he got into a war of words on Facebook and is accused of posting racist comments.

Tamia Brooks said a few days ago, she was browsing Facebook when she came across a video of an unruly passenger getting taken off a plane that was diverted to Detroit last week. When she commented on it, the Warren officer responded.

" I decided to comment on it I was talking to somebody about it and he just jumped into the conversation with all his racist stuff," Brooks said.

"I decided to comment on it because I didn't like what they were saying. I was talking to somebody about it and he just jumped into the conversation with all this racist stuff

After he jumped in, she called him ignorant in response to his racial commentary. He then went on a rant, saying the following:

"Black on Black crime is beyond repair, Black babies having Black babies - no men - man enough to stay with one lady and raise his kids. Every kids ambition is to either be a rapper or a basketball players or drug dealer. I'm ignant - drop out rate is astronomical. I (sic) other words a group of low life thugs and that is facts! Glad I wasn't born bl&@k. I would kill myself!"

"I have never had an experience of anyone saying something to me like that to me so I was just, kind of, taken aback," Brooks said.

When she learned that the post appeared to come from a Warren Police Officer, she called the department. An internal investigation was started and the officer in question was put on administrative leave.

Commissioner Bill Dwyer released a statement that said: "...Statements like this erode civilian trust and confidence in the police department and are not tolerated."

Brooks said a suspension isn't enough and is working with the internal affairs.

"I want him to get fired," she said. "I just thank them for taking it seriously."

The officer, a 21-year veteran of the force, was suspended last year after a domestic incident. He was reinstated after being acquitted of the charges. 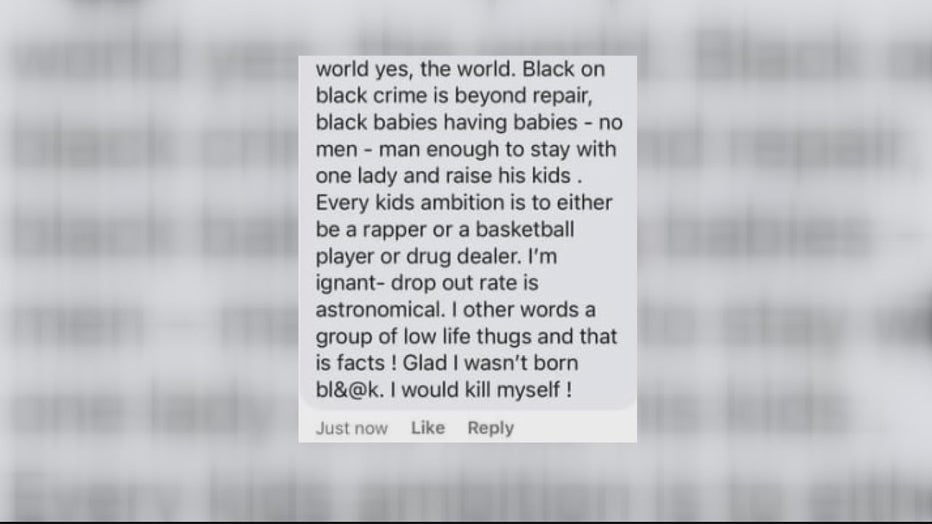