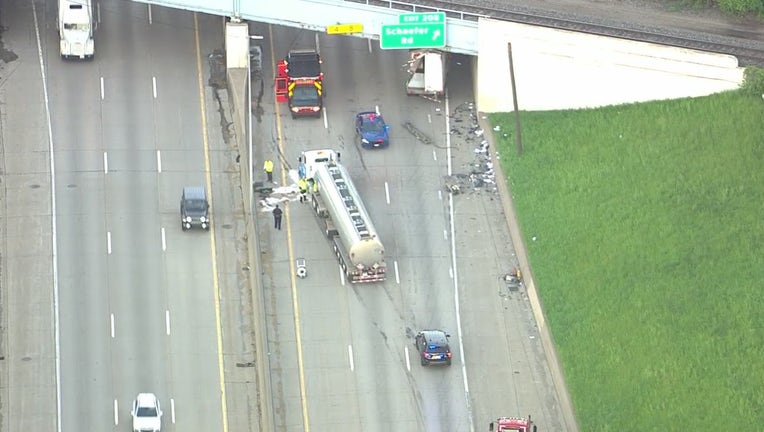 The crash completely shutdown access in the westbound direction since about 3:30 a.m. Tuesday morning. Drivers were being diverted at the service drive just past of Michigan Avenue and were being allowed to reenter at Schaefer or Greenfield Road.

While the tanker truck did sustain damage, no fuel leaked from the vehicle since it was empty, state police said.

According to posts from Michigan State Police, the tractor trailer was traveling west on I-94 when it began to weave within its lane of travel. It then became so severe it began to swerve before it rear-ended another semi-truck.

The collision caused the cab of the tractor to become dislodged from the chassis and debris was scattered all over the freeway.

MORE: Man critically hurt in chain-reaction crash on I-75 in Detroit

Footage from above the scene showed heavy damage to the trailer of one semi-truck that was under an overpass. A white material could be seen sprayed alongside the tanker truck.

Both vehicles were empty. One of the drivers was taken to a hospital with a serious head injury.

The Michigan Department of Transportation announced travel had resumed on the freeway around 6:45 a.m.